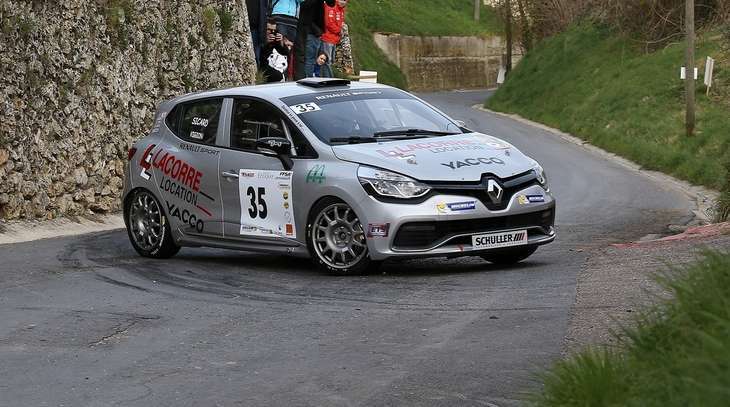 After the launch of the Clio R3T European Trophy in the Italian zone last weekend in the Il Ciocco Rally (21-22 March), the French Trophy kicked off with the Epernay Vins de Champagne Rally (28-29 March). On both occasions the Clio R3T’s level of competitiveness lived up to expectations.

The first round in the history of the Clio R3T European Trophy took place in the context of the Il Ciocco e Valli del Serchio Rally (Italian zone). There were five well-known crews with impressive results on the entry list, and victory went to Italian youngster, Fabrizio Andolfi. He finished 15th overall and second in the R3 class won by another Renault, which was not entered for the trophy.

Andolfi took the flag in front of Ivan Ferraroti and three-time European champion Luca Rossetti putting him in the overall lead of the Italian Trophy. The Il Ciocco Rally was a level 2 event (coefficient 1) so Andolfi scored the 25 points that went with victory plus 3 points for being the second-best performer (28 points in all), while Ferraroti bagged 18 points plus five for best performer (23 points). The next round in the Italian zone will be the Sanremo Rally (8-11 April).

The first round in the French zone was held in the Champagne region in the Epernay Rally. Experienced driver Jean-Sébastien Vigion came out on top putting his Clio R3T in the top 10 in the overall classification; he also won the 2-wheel drive category and finished as best performer in this round. Thus he bagged a total of 30 points (25+5) in front of Benoît Vaillant (18), Marvin Sorin (15) and William Pitot (12+3). The next event in the French zone will be the Dieppe Rally.

After the Italian and French zones the ALPS zone will be the next to start in the Critérium Jurassien (17-18 April). The Belgian and Iberian zones will follow in May with the Walloon and Rias Baixias Rallies.