Citroën DS3 WRC has a new livery! It almost looks like they were waiting for that win in order to get rid of the old clothes and put on some new colours. I must say, I love it. I had a tough time defending the old design, because, in all honesty, it was (getting) old, really it was. Compared to every other team, Citroën sort of remained in the past, carrying their old colours from 2014 to 2015 without changing too much (OK, well, Hyundai also did not exactly do much to their design for 2015). It’s no wonder people started questioning team’s dedication, did Citroën lose interest in the World Rally Championship? Do they even care? As it turns out, they really do. They started this year with host of upgrades on their cars and even though it wasn’t an easy ride for Kris Meeke and Mads Ostberg (mostly thanks to some very expensive driver errors), team never stopped developing the DS3 WRC. But could we really tell? Of course, we understand the significance of changes done under the hood, but visually, cars were just not there. They lacked change, there was very little that was new on the outside. Even though livery designs are completely optional, they mean a lot to rally fans. It’s a new season, new ambitions and a new or upgraded car, you should follow that with a new or at least upgraded livery. For the fifth round of the championship, they will do exactly that. New colours (good bye gold, it’s time to step down, finally) and a more elaborate design are set to debut in Portugal.

That’s not all, though. Citroën Racing also prepared some (even more) important upgrades to the car’s aerodynamics. DS3 WRCs will feature brand new front end, designed to provide more downforce and reduce drag. We don’t usually associate those features with rally cars, but every little thing counts, especially if it’s a part of a much larger upgrade package. No doubt, Citroën would love to repeat their Argentinian scores and a new livery coupled with some car upgrades should give them some more confidence. 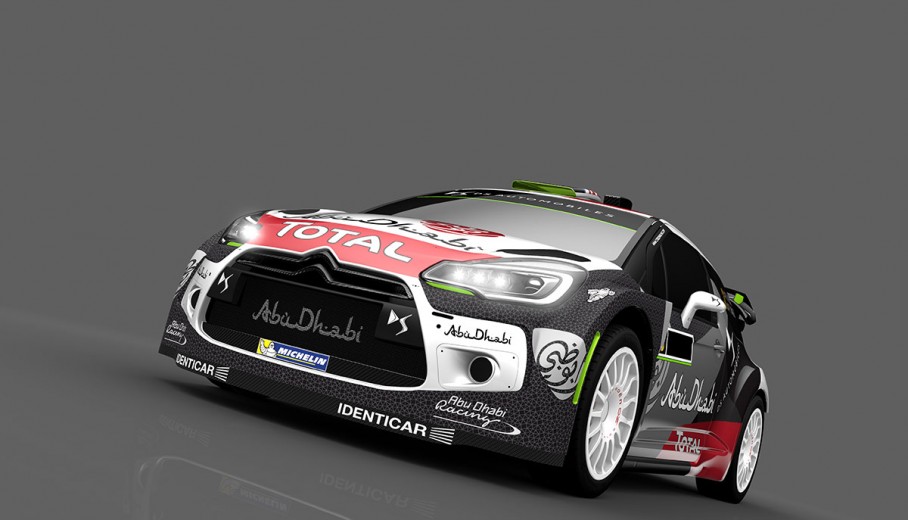 A few days after Citroën Racing’s 94th win in the World Rally Championship, the DS 3 WRC has undergone some significant changes. The most visible of these modifications concerns the livery of the cars driven by Kris Meeke/Paul Nagle, Mads Østberg/Jonas Andersson and Khalid Al Qassimi / Chris Patterson.

Visually, this “new look” DS 3 WRC features unprecedented design codes, combining Polar White, Perla Nera Black and Aluminium Grey with newly-designed geometric shapes to create an appealing new signature. The overall appearance is given a more dynamic feel with touches of fluorescent green below the headlamps, around the bumper-mounted air outlets and on the rear spoiler.

In line with the unique style offered to every DS 3 customer, the Citroën Total Abu Dhabi World Rally Team drivers were able to customize the roof of their own World Rally Car: white for Meeke, grey for Østberg and red for Al-Qassimi.

An initial series of upgrades were made to the DS 3 WRC for Rallye Monte-Carlo: a new turbocharged 1.6-litre direct injection engine derived from the Citroën C-Elysée WTCC, semi-automatic gearbox controls, a rear spoiler with vertical winglets and a redesigned rear suspension. All of these changes have proven effective as the team has enjoyed a good start to the season in which it has recorded three podiums, including a win in Argentina.

In Portugal, the next phase of the upgrades will be introduced with a new front end, featuring a totally redesigned bumper and wings, which aims to improve the aerodynamic performance of the car by lowering drag and increasing downforce.

“Citroën Racing hasn’t stopped working on the development of DS 3 WRC since the current regulations were introduced in 2011,” reiterated Yves Matton, Citroën Racing Team Principal. “If you take the new features unveiled in January and this second batch, this is the most significant upgrade since the DS 3 WRC was first homologated. We’ve already seen that the work of the teams is bearing fruits. So to that extent, the recent one-two at Rally Argentina has just made everyone even more motivated! The aerodynamic upgrades introduced here should help us to keep improving. Confirmed during wind tunnel and pre-event testing, the gains achieved in terms of drag coefficient and downforce are significant. For the 60th anniversary of the Brand, we also felt it was important to share the values of DS through a new graphic identity. So far, the reactions of the people who have had a sneak preview of the car have been extremely positive. We hope our supporters also like this new signature!”