I’ll be honest, when Rally Poland was announced to be returning to the WRC calendar in 2014, I was more than a little skeptical. Did the WRC really need another rally in Europe? At the time, it seemed like there were other countries and locations that deserved to get a rally before Poland. In addition, it added another gravel event to a calendar that was already quite heavy on the loose stuff. To top it all off, some of the stages seemed quite unimpressive last year. Many of them looked the same and seemed to lack character and variety. There were also big issues with the roads in Lithuania getting chewed during the opening loop that caused their cancellation in the afternoon.

Fast-forward one year, and I have to say that I am beginning to warm up to Rally Poland. As I reflect on a great opening day, I have begun to understand that this rally fills a necessary role in the WRC. After 4 successive rough and twisty endurance events in Mexico, Argentina, Portugal, and Sardinia, Rally Poland gives us a bit of a different flavor. The smoother roads don’t offer the car-breaking challenge of the prior events which means that there are far less retirements. However, the heat and high speed corners still make tyre choice a bit of a challenge. In addition, the rally features several shorter stages between 10-20km. While I don’t love this format for all rallies, it actually works well in the case of Rally Poland. When combined with the smooth and fast roads, the shorter stages encouraged the drivers to push hard from start to finish. There was no easing off to save the car. Instead we saw the crews pushing at maximum attack for the entirety of the day. The stage times that filtered in over the course of the first leg were evidence of this. The guys were trading tenths of seconds all day long leaving the top 4 covered by less than 20 seconds! This was a welcome change from the large gaps that opened up during the rough rallies due to attrition from accidents and mechanical failures. 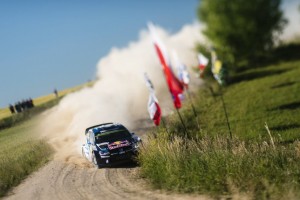 However, even if there wasn’t a close battle at the top of the time sheets, Rally Poland has brought the top level of rallying to a part of the world that absolutely deserved to host a WRC event. Eastern Europe is mad for rally, and watching almost any rally video on YouTube will provide evidence of this. Yes, the Barum Rally in the Czech Republic has long been on the IRC and ERC calendars, but as good as the European Championship is, it’s no WRC. I have always believed that in order for rallying to succeed in a particular region or country, there are 3 conditions that need to be satisfied. First, there must be a strong history and heritage of rallying. Poland certainly succeeds on this aspect: Rally Poland is one of the oldest rallies in Europe, second only to the legendary Rally Monte Carlo. In addition, Poland has long had a strong national rally championship. Secondly, there must be a national hero for the fanbase to rally (no pun intended) around. With Robert Kubica’s rise to the pinnacle of rallying in the WRC, the Polish fans certainly have an extra incentive to come out to the stages. Lastly, there must be a high profile event, and with the WRC back in Poland, this final puzzle piece has fallen into place.

Yes, it’s another gravel rally, but Rally Poland fills a special role in the WRC and presents a challenge unlike any other rally on the championship. We all want variety when it comes to the WRC calendar, and while it may not be the most spectacular rally or location, it is a nice change of pace at the midpoint of the season. It may take some time to continue to grow on us, but in the long run, Rally Poland is a valuable addition to the WRC that deserves to be there. Here’s to hoping the rest of the rally brings us as much excitement as today!