Qualifying Stages: Is the Reward Worth the Risk?

There were a few battered rally cars coming back to service today in Atrim after incidents in today’s shakedown/qualifying stage. First, during shakedown, David Bogie got caught out on some of the treacherous slime coating the road and stuffed his Skoda into a bank damaging the radiator. Later, in the qualifying stage, it was Robert Consani’s turn where he also damaged his radiator in a spin. As I watched Consani’s battered DS3 come past, I started to wonder about whether qualifying stages offer enough reward to be worth the risk that they present.

One one hand, I quite like the idea of qualifying stages. They offer an alternative to the road order drama that we have heard so much about in the WRC. There’s no question about what is fair and what isn’t. The fastest guy gets to pick his spot, and that’s that. In addition, it definitely adds a bit of meaning to the day before a rally begins so the crews are actually pushing out on the stage. As a spectator, I would have to say that it is quite convenient as well. It is nice to know that I can park my car in one place for the entire day and not have to worry about rushing from stage to stage. With the morning ERC shakedown, the midday ERC qualifying stage, and the afternoon national rally shakedown, you were guaranteed to see a lot of action without too much effort. In this way, having shakedown and qualifying on the same stage offers a lot of “bang for the buck”. 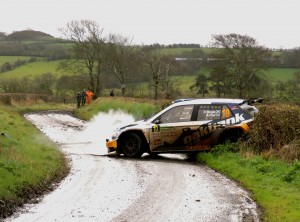 With the risk involved, is it really worth it to push on a qualifying stage? Well, I’d have to say it depends on the rally. Typically on tarmac rallies, start order doesn’t carry that much of an influence. However, the Circuit of Ireland is no ordinary tarmac rally and this weekend, road order could make a huge difference. First, even after just a few cars had passed through the stage, there was a lot of mud and other “deposits” (as Craig Breen called them) dragged onto the road. Much like we saw Ogier do in Mexico, the lead car could make big cuts and leave a mess for the cars behind. Secondly, the weather plays a huge role. With small squalls continuously rolling in off the sea, there could be a huge difference in the weather conditions between the lead car and those further down the order. With these realities in the back of their minds, the crews might have been pushing a bit more than usual this afternoon.

What do you think? If you were competing, would you take the risk to achieve a favorable start position?