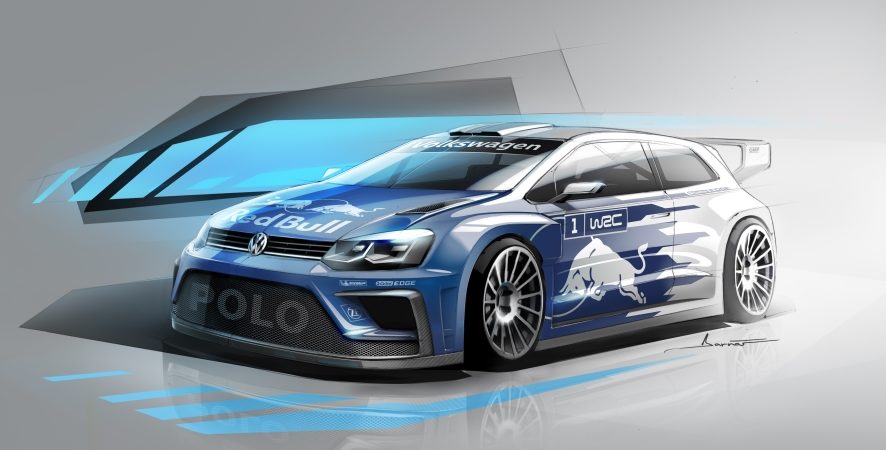 The next generation World Rally Cars will look nice, there is no doubt about that. We’ve seen some design ideas tested so far, mainly by Volkswagen; thanks to new rules cars will sport a more aggressive look in 2017, but during testing that new look was achieved by simply extending the existing features, which led to some funny solutions (such as ridiculously wide wheel arches on Polo, for example). Fortunately, testing is for testing only, the car will, in its final form, use a more sophisticated design. Maybe even too sophisticated, according to some critics. But let’s keep in mind that this is only a sketch and besides, do we really care that much for sleek lines if we get 380 HP and more effective way of transferring them to the surface at the same time? In the end, I don’t think this sketch is meant to show us everything – surely there are some things they want to test more, even if it’s only about looks. I thank Volkswagen for this piece of news and I’ll keep an open mind for what 2017 will bring.

In the meantime, did Toyota start testing?

Below an excerpt from Volkswagen’s announcement.

A seemingly small change with great consequences: increasing the diameter of the air restrictor by three millimetres allows the engineers to provide the Volkswagen Polo R WRC with even more power. That means: instead of the 318 hp currently available, Sébastien Ogier, Jari-Matti Latvala and Andreas Mikkelsen will be able to call upon approximately 380 hp in the future. Furthermore, it will also be possible to use electronic centre differential for the power transmission. This means the car will not only be more powerful, but that this extra power will also be transferred directly to the road.

Where the World Rally Car must currently weight at least 1,200 kilograms, the minimum weight will be reduced to just 1,175 kilograms in 2017. More power and less weight – a combination guaranteed to provide more spectacular action. However, the changes under the bonnet are not the only modifications. The car will also look different. The most striking changes include a much larger rear wing and a broader front spoiler – the 2017 Polo R WRC will boast a more aggressive and powerful look.