Do We Really Need More Whinging?

5.9 seconds. 5.9 seconds are covering the top three after a fantastic day of rallying in the Mosel vineyards and yet, the WRC Promoter still felt the need to goad it’s drivers into whinging about road order to create a sense of buzz and drama. Here’s how it played out. After the first loop of stages, during his interview at the mid-day service, Andreas Mikkelsen made a comment about Sebastien Ogier making cuts and pulling mud onto the road. I honestly don’t have a problem with him making this observation. Of course, like all other athletes, rally drivers are competitive, and Andreas wants to perform at the best of his ability. He wasn’t pleased with the time that he was losing due to the mud, and as a competitor, he made his feelings known. Fine… he made his point… why not just leave it at that?

Instead, the rest of the 26 minute TV highlight show strung along viewers to believe that there was a simmering feud between Sebastien Ogier and Andreas Mikkelsen over this issue. The show concluded with the interviewer trying to bait both Sebastien and Andreas into a war of words over the corner cutting and road position. Really??? Does the WRC really need to encourage more whinging about road position after all we’ve heard over the past few months? Do they have so little confidence in their product that they felt the need to manufacture drama between its drivers to make the rally seem more interesting? Maybe I’m making a mountain out of a molehill, but to me, taking this angle felt a bit cheap. This was an absolutely fascinating day of rallying where the top 3 were trading stage times throughout the entire leg. With such a close battle at the front, I don’t think that it was necessary to beat the dead horse of road order controversy even further into the ground. It’s gotten a bit boring, and we’re all tired of hearing about it.

To their credit, neither driver took that bait that was dangled in front of them during their interviews. Andreas took the high road and laughed it off saying that if he was running first on the road, he would do the same thing. Sebastien, on the other hand, completely refused to acknowledge the question. They both knew that it was a non-issue and not something worth quibbling over. I just wish the WRC Promoter realized the same thing. Don’t get me wrong. I want to see the drivers’ personalities during the interviews, and when there is a real feud between two drivers, it does make for some very interesting viewing. Do you remember back in 2001 during Rally Portugal when Tommi Makinen refused to speak to Carlos Sainz at the start of the final day? That was a real rivalry that didn’t need to be propped up by the TV crew. I want to see those real stories, and every rally has them. Yes, some of them may take a bit of digging and hard work to uncover, but they are there. I just wish that the WRC Promoter would make the effort to find these real stories instead of artificially resurrecting the same one we’ve heard over and over again this season.

P.S. If you really want to see what mud on a tarmac stage looks like, check out what the BRC guys are dealing with this weekend in Ulster: 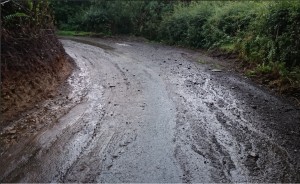