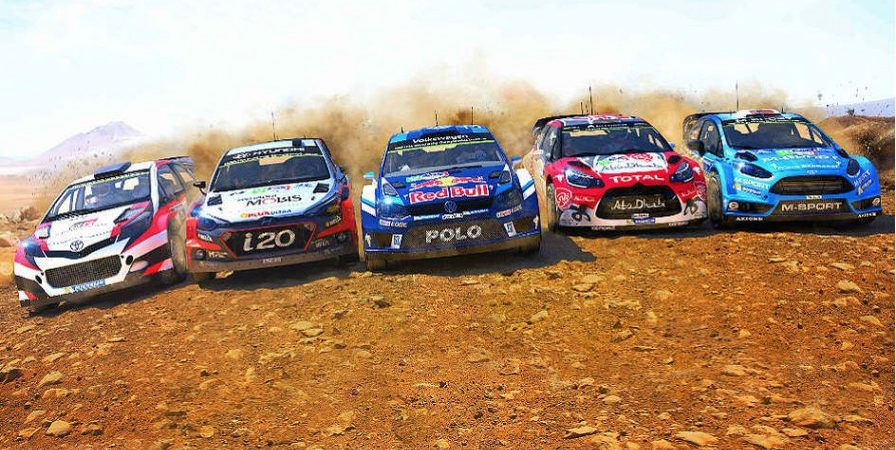 For starters, lets now dive into the various cars available in WRC6. Since this is a licensed game, of course, the car selection is going to be limited to the vehicles that actually competed this year in the WRC. That means you will get WRC, WRC2, and WRC3. Do you notice what is missing from this list? What about the Drive DMack R2 Fiestas? This is one of the coolest, most competitive championships within the WRC, and sadly, it is missing from this game. Of course most people want to get behind the wheel of the top class cars, but I was really looking forward to throwing those little R2 Fiesta’s through the stages. Because of this, I find their omission to be really disappointing. The sorry state of WRC3, which has essentially become a one-make Citroen DS3 championship, only further magnifies this disappointment.

However, even without the R2 Fiesta’s, there are still quite a few cars to choose from in WRC6, and I have to say that by and large, I am mostly impressed with how they are portrayed in the game. There is a tangible difference between the feel between the cars in each class. The WRC cars feel as powerful as they appear on TV and this is really felt when launching off the start line. If it wasn’t for that pesky, low speed oversteer, they would be really fun to drive. Personally, though, I’d have to say that the stars of WRC6 are the R5 cars in the WRC2 class. Because they don’t have quite the horsepower of the top class WRC cars, they suffer far less from that unsettling oversteer that I discussed in part 1. In addition to this, the game does a great job of portraying the technique required achieve quick stage times in these cars. Keeping momentum and flow from corner to corner is essential in the R5 cars since they just don’t have the grunt of the WRC cars, and you can really feel this when you drive them. If I’m honest, however, the WRC3 cars feel a bit like an afterthought in the game. They just don’t provide a very memorable experience, and it seems that their only role is to add an additional step on the ladder system in the career mode.

How about the way the cars look in WRC6? Well, once again, I am going to have to hand it to Kylotonn on this one. With the graphics turned all the way up, the cars really are attractive. Over the years, even recently, racing games have at times produced cars that look like plastic Airfix models. Fortunately, WRC6 has managed to avoid this pitfall and its cars, while limited in selection, look absolutely fabulous on the stages. This applies when the cars are both clean and dirty. When the stage begins, the cars look absolutely beautiful with reflections that are noticeable but not overdone. As a stage progresses, however, the dirt effects on the car exteriors look believable and don’t appear as if they have been “painted” onto the cars like they do in other rally games. All in all, when it comes to the way the exteriors of cars look in WRC6, the results are much better than WRC5 and Sebastien Loeb Rally Evolution, and at times even better than some of the cars in Dirt Rally.

OK, so from the outside, the cars look great, but what about the interior views? As much as I wish I could enjoy driving WRC6 from the cockpit camera, it just doesn’t work. There are a couple of reasons for this. First of all, even with the multiple cockpit camera settings, the field of view (FOV) doesn’t really change, and this causes a disorienting experience, especially when in the WRC cars with their tendency to oversteer. Secondly, the windshields often have a tint that takes a lot of contrast out of the environment. Not only does it make the graphics look much worse than they really are, it also makes spotting hazards such as rocks in the undergrowth much more difficult. As for the cockpits visually, they do the job, but won’t blow you away. There are some nice effects with dynamic shadows that fall across the dashboard, but these aren’t nearly as well done as in other racing games. In the end, the cockpits aren’t pretty enough to bother dealing with their visual issues, and you will most likely be finding yourself playing from the hood camera.

The one area where the cars have most dramatically improved since last year is in the sound department. Before you ask, I’ll tell you right now that the sounds still don’t come close to the absolute magic that Dave Sullivan (@sound_fx) achieved in Dirt Rally. However, the sounds in WRC6 took a huge leap from the pitiful efforts made last year in WRC5. The first thing that I noticed was the addition of many more ancillary sounds that weren’t present in last year’s game. WRC5’s sounds were largely limited to engine noise, a few pops, and impact noises… and that was it. In contrast, in WRC6, I’m hearing turbo blow off valves, anti-lag crackles, squealing brakes, and transmission whine. While these sounds are not created individually for each car like Codemasters did with Dirt Rally, they are mixed uniquely for each car and this does make a difference. For example, the trademark “Fffffffftttttt” sound of a turbo blow off valve is much more pronounced on the VW Polo than the Citroen DS3 R5. This goes a long way to making each car sound different. While the exterior sounds aren’t bad in WRC6, the one area where the game’s sounds really shine is with the interior view. The sounds of gravel bouncing off the underside of the car are balanced so well with the transmission and engine noise to create a very immersive auditory experience. For that reason, it makes the visual issues with the cockpit camera that I described above so very disappointing.

So, what’s the final verdict on the cars in WRC6? Being a licensed game, you don’t get many models to choose from (10 to be exact), but with the exception of the WRC3 class, the cars really do shine in WRC6. They all look and sound quite a bit similar, but this is more of a statement about the current state of the WRC rather than the game itself. My litmus test for the quality of cars in a video game has always been how they compare to the look and sound of the real cars on TV, and in WRC6, they hold up quite well. For this reason I’m going to say that the design of the WRC6’s cars is one of the highlights of the game. I’ll see you in a few days when we take a look at how WRC6 delivers on the one thing that can make or break a rally video game. Until then, happy rallying!