In the 3rd piece of this 4 part series covering WRC6, we’re going to take a look at one of the most important aspects of any rally game. As I hinted at the end of part 2, this is one of the things that can “make or break” the experience. What are we talking about? It’s the stages. No matter how good the graphics, sound, or even physics are in a game, if the stages are lackluster, the game will disappoint. Why do I say this? In my experience, when playing a rally game, the longevity of the game is directly proportional to the quality, quantity, and variety of the stages. Even if the cars don’t look or feel great, in any almost every game, there is usually at least one that I becomes my “go to”. However, if the stages aren’t any good, even that “go to” car won’t be enough to keep my interest. To succeed in this area, the game needs to offer enough unique, high quality, and realistic stretches of road that they don’t become boring after the first play-through. Various recent games have succeeded on various levels based on this criteria, but none have hit it out of the park. For example: Dirt Rally offers the most detailed and true-to-life stages ever seen in a rally game, but unfortunately it falls short due to their lack of quantity. There are less than 100km of unique road that is just used backwards and forwards. Sebastien Loeb Rally Evo, on one hand, features many more unique kilometers than Dirt Rally, but the visual detail just isn’t quite as good. Kylotonn’s first attempt at creating rally stages didn’t go so well last year, so, does WRC6 deliver when it comes to stage quality, variety, and realism?

I’m not going to beat around the bush on this one. The stages in WRC6 are some of the best stages I have played in any rally game. They are the reason that I keep coming back to WRC6 despite the limited car selection and sometimes confusing physics. Every time I launch into a new stage, the game gives me a true feeling of anticipation and excitement. Even before the release of WRC6, Kylotonn was promoting the fact that they had re-worked all the stages to make them more realistic than ever. However, like most advertisements, when I read this months ago, I took it with a grain of salt. We’ve all heard that one before… right? However, to their credit, the developers of WRC6 really did make some very impressive upgrades to the stages. For starters, they feature far more detailed textures than last year’s game. The road surfaces look extremely believable and the visible lines made by other cars give a sense of immersion. Take a look at the slime in the screenshot from Wales Rally GB below and you’ll see what I mean. All of the textures look a lot better than last year, and definitely pop when you turn up the graphics settings. 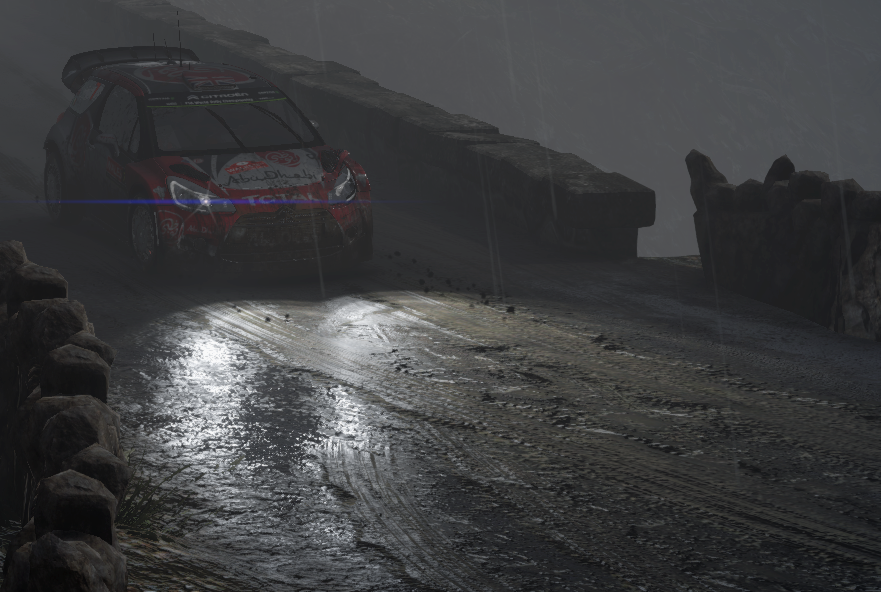 In addition to the improved textures, the stages were (as promised) made a bit longer than in WRC5. Now, if you’re looking for the 40km stages from Rally Championship 2000, you’re going to be disappointed, but the average stage takes about 4-5 minutes to complete and some are in the 7-8 minute range. No… it’s still not long when compared to real WRC stages, but it’s a step in the right direction and even after playing the shorter stages, I am left satisfied. Along with increasing the stage lengths, the roads were made narrower in places, and this has definitely made a big difference in the feel of the game. It no longer has that “arcade” feel to it that was very noticeable in WRC5.

However, as good as all this is, what really makes the stages memorable in WRC6 is Kylotonn’s attention to detail with their design. At times, both in real life and in rally video games, it is very difficult to differentiate the dry, dusty rallies from each other. Somehow, Mexico, Portugal, Sardinia, and the gravel stages in Spain all seem to look quite similar. However, in WRC6, even though these rallies share similar characteristics, they all have a unique look, especially with the objects alongside the stage. Even though you would expect Spain and Portugal to look quite similar, there are differences, especially with the foliage alongside the stage. The gravel stages in Spain run alongside olive fields while the Portuguese stages wind their way in and out of pine forests. Having been to the Bot stage in Catalunya last year, I can say that the stage in WRC6, while not an exact replica, is very faithful to the character of the real-life stage. Another example is the “road furniture” present in Mexico that isn’t on found on other gravel rallies. If you watch onboard footage, there are some very nasty cinder-block walls along the inside of turns to prevent soil erosion. These are present in the game and will catch you out if you clip one of them. It is small details like this that really make me think that the Kylotonn team sat down and watched some proper onboard footage to make sure that their stages truly resembled the character of each rally.

Now, none of the stages in WRC6 are exact replicas, with one exception… the much hyped super-special stages. I have to be honest, these are for me the biggest disappointment in the game. However, the reason for this disappointment is not Kylotonn’s fault. They actually did a masterful job of recreating these stages in the game. It is just that these stages really aren’t that good, and they aren’t very fun to drive. They are just too tight with too many junctions, hay bales, and other obstacles that break up any sort of rhythm. I now understand why most WRC drivers dislike them so much. The reason that I have a problem with these stages being included in the game is that since each rally has 5 stages, the events with super-special stages have only 4 proper stages. That just isn’t enough for me to sink my teeth into, and I really wish that Kylotonn had taken the time and effort they put into the super-special stages to give us a few more of their fantastic open road stages.

That’s my only gripe when it comes to the stages in WRC6. I just wanted to see a few more. Even if Kylotonn reversed the 4 proper stages they gave us, that would be a good start. As it stands however, while the overall stage count of the game isn’t bad, when those stages are broken up between 13… oops… 14 events (remember China…) each rally seems a bit thin in terms of content. I know that last year they released two stage DLC packs, and after seeing the quality of Kylotonn’s work this time around, I’d gladly put down some of my money for some more of their fantastic stages. They truly are, in my opinion, the strongest aspect of WRC6.

I’ll catch you after Rally Australia for the 4th and final part of this review (which I’m sure you’re tired of reading by now). In the meantime, let’s try to enjoy the 2016 season finale and VW’s last WRC rally… and I still can’t believe I’m writing those words. Until then… Cheers!