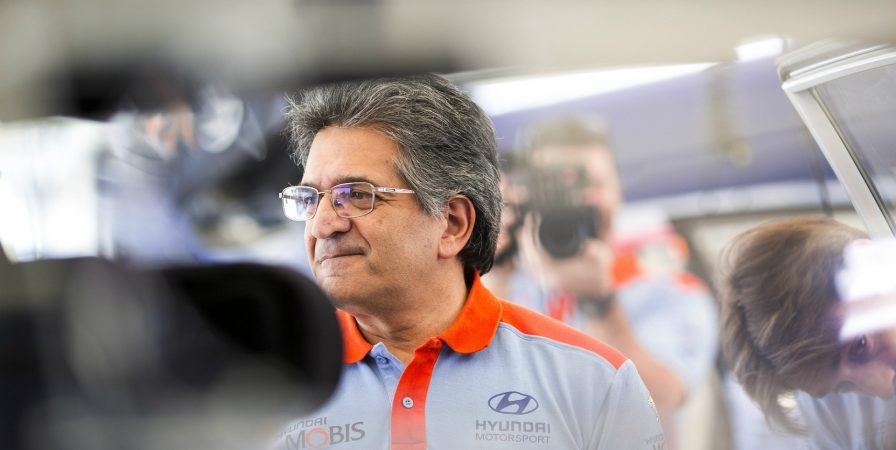 In a variety of sports, when things aren’t going a team’s way, it’s not uncommon to see the manager or coach get canned regardless of whether it is deserved or not. Over the past few years in rallying, we’ve seen some managers step aside, (think Jost Capito and Yves Matton) but I’m struggling to recall another instance similar to what just happened today at Hyundai. In case you haven’t heard the news, Hyundai manager, Michel Nandan has been replaced (quite suddenly I might add) by a guy named Andrea Adamo who used to oversee the customer racing side of Hyundai. I don’t know about you, but for me, this is quite a surprise, especially in its timing. Making such a huge change this close to the start of the 2019 season raises more than a few eyebrows. My question is: did Nandan deserve to get let go?

If we look at 2018, I’d have to say that the drivers under-performed more than the team. While the Hyundai’s have proven to be a bit fragile in past seasons, the cars held together quite well this year. The weak link was definitely the drivers. On Thierry Neuville’s side of things, he blew a 27 point lead in the championship at the mid-point of the season. He had his first WRC championship well and truly within reach and he let it slip through his fingers. On the other side of the garage, Andreas Mikkelsen was supposed to be the revelation of 2018 and he fell flat on his face. Chronic balance issues plagued him throughout the year and he never found the right feeling or confidence to push for top stage times. His season was mediocre at best, but in reality, ended up being a disaster. Haydon Paddon’s improvement over 2017 was a bright spot on the team despite crashing out of the lead in Portugal, but ironically, he’s not going to be a part of things in 2019. Dani Sordo just kept doing what Dani Sordo does and while he never blew us away with his results, he showed he could still hang with the big boys at the top level of the sport. If you look at the 2018 season in isolation, you’d have to say that Nandan got dealt a bit of a harsh blow. Based on last season’s results, I’d have to say more of the blame lies on the drivers than on the manager and Michel ended up taking the fall.

HOWEVER… if you look at the history of Hyundai WRT since they re-entered the championship in 2014, the story changes a bit. Things started out well enough with their very first podium coming just 3 rallies into their first season. Do you remember Thierry Neuville and his big bottle of Corona? Neuville also got the team’s first win later that season in Germany. By all accounts, that was a more than reasonable debut for the team. The next few seasons, Hyundai improved, but always played second fiddle to VW because… well… it was VW! However, when VW dropped out of the championship at the end of 2016, that was supposed to be Hyundai’s time to pounce. In all honesty, the team absolutely squandered this opportunity and within that context, the last two seasons have been a huge disappointment. When you look at the 5 year span of Hyundai WRT’s return to the WRC, all of a sudden, it raises a few more questions about the management. When things are viewed from this perspective, yes, perhaps it was time for Nandan to go.

So, did Nandan deserve this fate? I wouldn’t say he DESERVED it per se, but at the same time, I think it was necessary. Hyundai should be doing better than they have been, especially in the post-VW era of the WRC. I just don’t know why this wasn’t done weeks before after the end of the 2018 season. This seems more like a move made to shake up the team and turn some heads rather than a damning condemnation of Michel Nandan’s performance. Something had to change, and with the drivers already under contract for 2019, the next person in line was Nandan. If anything, this is a wake-up call to the drivers that they have got to figure it out very soon. This time, the manager took the blame, but if results don’t improve in 2019, the responsibility is going to fall squarely on their shoulders. That’s how I see it anyway… what are your thoughts?