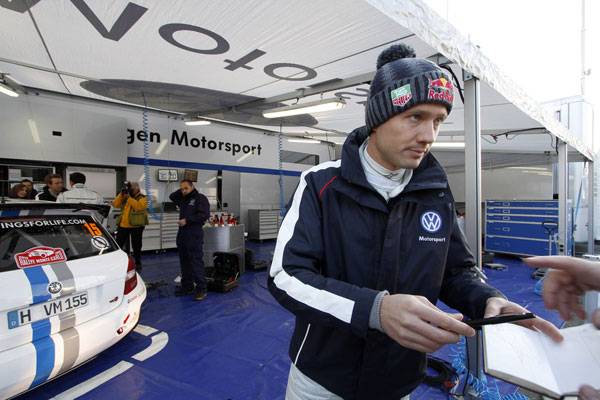 Sebastien Ogier’s last year’s conflicts with Sebastien Loeb in Citroën eventually led to Frenchman’s departure to Volkswagen. Praised as one of the very few drivers capable of raising Loeb’s blood pressure, Ogier proved he has the speed behind the wheel. During winter break he won Race of Champions, but more importantly he’s very serious candidate for top spots on first rally of new season in Monte Carlo.

During 2012 Ogier will take part in all WRC rallies in Škoda Fabia Super 2000. On paper this car is inferior to current top WRC machines, with weaker engine and lack of turbo, but Fabia is one special beast. Painstakingly developed during many seasons in IRC and regional championships, it stands out as one of the top (if not the very best) Super 2000 specced car. In hand of capable driver, and with the right mix of tricky conditions, Fabia can be pretty lethal little warrior.

Rerun of morning first stage saw Ogier again going a bit slower than closest competitors, although his deficit behind Loeb amounted to just over 38 seconds on SS3. Finally, last stage of the day gave Ogier reason for big smiles. Just the right amount of speed and consistency led to him taking fourth spot in general classification.

Although he is close to 1 and a half minutes behind third place man Petter Solberg, Ogier is seriously eyeing podium, although he admits his priorities are to finish the rally in order for team to get as much information and training from it as possible.

Even so, it would be interesting to have him on podium in Super 2000 machine!