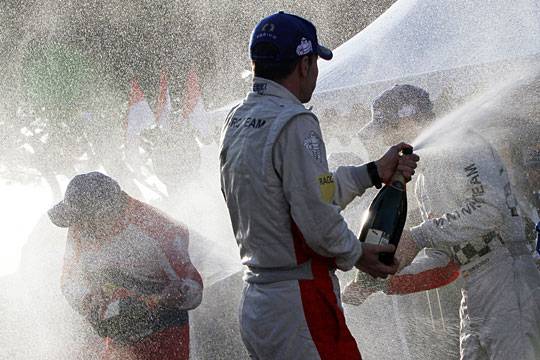 The MINI WRC Team concluded the fifth and final day of the Monte Carlo Rally by bringing Dani Sordo (ES) and Carlos del Barrio (ES) and Pierre Campana (FR) and Sabrina de Castelli (FR) to the finish on the principality’s harbourside second and seventh respectively. This was only the team’s seventh FIA World Rally Championship event, but it was the third podium for the Spanish crew.The sun was shining and the roads were dry for the final stage of the rally – the 5.16 kilometre Power Stage at Ste Agnès – Col de la Madone – but this didn’t mean it was an easy stage. It was twisty and narrow and all the crews knew it could be difficult. Sordo set the fourth fastest time, while Campana was tenth quickest, despite suffering a problem with the power steering on his MINI John Cooper Works WRC. This stage was the 18th of the rally, which included 433.36 kilometres of competitive mileage in its total distance of 1,780.47 kilometres. The top three went to the Place du Palais Princier in front of the royal palace for the prize giving, and there will be a Gala Dinner in the Sporting Club this evening.

Dirk Hollweg, Head of MINI Motorsport:
“I am very happy that the brand has returned to this legendary event and scored a very impressive result with not just Dani on the podium, but also Pierre really doing a great job for such a relatively inexperienced driver. It was even more gratifying for us to see the results of the other members of the MINI Motorsport family, as the privateers also put in some impressive results. The fans are always really enthusiastic here and make a special atmosphere on the entire rally. They really welcomed us back to our old hunting ground, and we were proud to give them this result.”

Dave Wilcock, Team Principal:
“This is my first event as Team Principal so to get a second in Monte Carlo with the MINI WRC Team is absolutely fantastic. Obviously we are all extremely pleased. We had all our fingers crossed wanting to get through the Power Stage with no problems. Dani was fourth quickest through it, which is fine, even though we were hoping for another drivers’ championship point, but what you want doesn’t always happen! We are extremely happy with the result as both Dani and Pierre have done very good jobs for the team. The whole team has worked so hard for this and it is well deserved.”

Dani Sordo (MINI John Cooper Works WRC No 37):
“We had no problems at all today. Yesterday I was ‘sleeping’ a little bit in the stages so lost a bit of time to Petter, but I am happy with the result. This is great for both me and the team. I think the crucial decision was the tyres we used on day three when we had snow on stage12. Petter (Solberg) lost time to me there and this was really important, as to be honest we took it a bit carefully and he was fast. Without this stage he would have been really close. Being second for the second time for our new team is really, really good.”

Pierre Campana (MINI John Cooper Works WRC No 52):
“I have really enjoyed this rally. It is a very good result for me and I have made good progress on every day. The car really feels nice and I am happy with this performance, which is my best WRC result. The Power Stage was very narrow and twisty, and it was unfortunate I had a problem with the power steering. As you can imagine this made turning the car a bit difficult.”