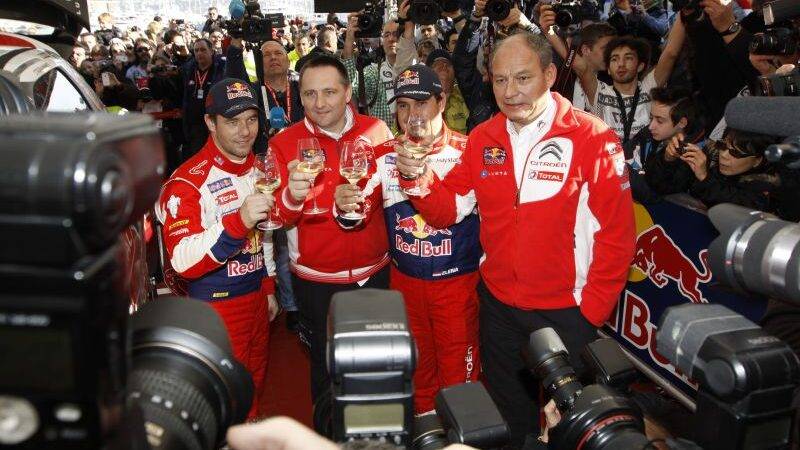 The 80th Rallye Monte-Carlo drew to a close today with victory going to Sébastien Loeb and Daniel Elena, their sixth win in the Principality. The eight-time World Champions enjoyed a clean sweep as they also picked up the three bonus points awarded to the winner of the Power Stage.

Fourth overall in the rally, Mikko Hirvonen and Jarmo Lehtinen also collected two points for their performance on the final stage. This result means that Citroën Total WRT takes the lead in the Manufacturers’ World Championship.

After four long days’ racing, the final day of the Rallye Monte-Carlo was without doubt the shortest ever seen in the history of the World Championship: the 5.16km of the eighteenth stage, on a route between Ste Agnès and the Col de la Madone, were covered in under 3m30s by the leading WRC cars!

At the stop control, Sébastien Loeb and Daniel Elena were pleased to see that they had recorded the fastest time, earning them three additional points in the Drivers’ World Championship. “I had decided to push because these points could make all the difference in deciding who wins the title,” explained Sébastien Loeb. “Apart from the points scored, I am happy to win a rally that means a lot to me. There were a lot of supporters alongside the roads and I also wanted to win for them. It’s a big gap to second, but I wouldn’t say that this was an easy win. We had to deal with all sorts of conditions and my lead was largely built on better tyre choices, which were mainly down to the work of Citroën Racing’s technical team and our tyre partner Michelin. For the first time in a long time in WRC, we were able to choose between five types of tyres and we always managed to pick the right tyres for the circumstances. The Citroën DS3 WRC worked like a dream. I felt comfortable from the start of the rally and I managed to get into a good rhythm. It’s certainly a nice way to start the season…”

Second in the Power Stage, Mikko Hirvonen and Jarmo Lehtinen ended their first rally with Citroën Total World Rally Team in fourth place overall. “It wasn’t the easiest rally for a first race in a new car, but I am pleased with the result,” confirmed the Finn. “The two days we had snow were particularly difficult. On tarmac, I was more comfortable and I was able to set some good times. I had to take it easy, avoid making mistakes and focus on getting to the finish to score some points. That’s exactly what we did. I can’t wait now to be in Sweden, I am really looking forward to racing there.”

For his first rally in charge of Citroën Racing, Yves Matton praised the performance of the entire team: “It’s important to start the season on a positive note and great to win a rally as legendary as Monte-Carlo. One of the key factors was tyre choice. The analysis work performed prior to the rally by our engineers, who had imagined almost every possible eventuality, helped us to make the right choices. Sébastien was impressive in terms of his race management. He was patient and took it a little easier when necessary and then pushed when the conditions enabled him to do so. Mikko did what we asked of him: make it to the finish in a good position. He took it step by step, but his three fastest stage times showed that he was getting to grips with the car. He gave himself the time he needed and that demonstrates his professionalism.”

“This is an exciting result. Once again, I was impressed by the entire team. It is very satisfying to see everyone working in relaxed fashion. I’m also pleased to see that Mikko and Jarmo are integrating well at Citroën Racing. The red army is on its way again!” praised Frédéric Banzet, CEO of the Citroën Brand.

The next event in the World Rally Championship will be held in Sweden between 9th and 12th February.