Mini preview – five Minis at the start in Sweden 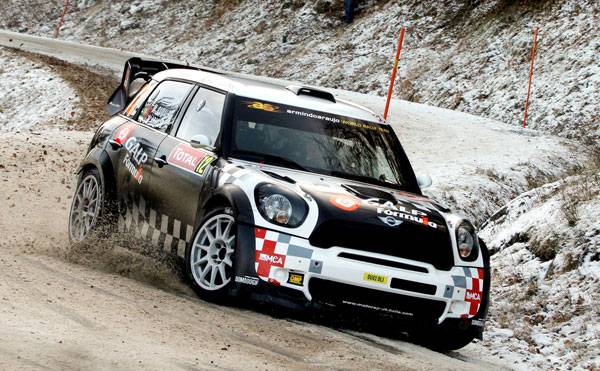 After politics comes racing, or at least we hope so, and five crews mentioned in Mini’s preview will enjoy action packed three days of rallying in Sweden. Spread over three teams, crews will once again sport Mini’s rally machine in full speed, but fans should pay close attention to cars liveries and corresponding teams, because unlike Ford and Citroën works teams, Mini will compete in various colours.

Either way, we can only hope the following days will bring us a lot of rallying and no politics. We had more than enough of that.

MINI fans are in for a real treat at the Rally Sweden. Three teams with a total of five MINI John Cooper Works WRC cars will compete at the classic rally in the far north.

Because the second round of the 2012 WRC season is held entirely on snow and ice, the Rally Sweden always represents a unique challenge for all involved. The 24 special stages get underway on Thursday with the debut of the newly introduced “Qualifying Stage”. Three teams are banking on MINI cars as they look to defy the Scandinavian drivers who traditionally start the rally as hot favourites.

Armindo Araujo and Paulo Nobre line up in the MINI John Cooper Works WRC cars with start numbers 12 and 14 in their first outing for the newly formed WRC Team MINI Portugal. Following the curtain-raiser at the Rally Monte Carlo, at which both drivers made a successful start to the season, Araujo and Nobre immediately set about preparing for the special conditions they will encounter in Sweden, and now feel at home on the icy surface in their MINI WRC cars.

With the Prodrive-run WRC Team Dani Sordo, driving the number 37 MINI WRC, will be out to follow on from his successful start to the season, which saw him finish runner-up at the Rally Monte Carlo. However, he too is well aware that the Rally Sweden is one of the most difficult events on the WRC calendar. “It is two years since I last drove on ice, and it will be a real challenge to keep up with the drivers from the north of Europe,” says Dani. “I will do my best to finish as high up the overall standings as possible though.”

Patrik Sandell will take over behind the wheel of the number 52 MINI WRC. The man from Sweden will take on the role of local hero and will also enjoy home advantage. “Driving the car on routes I am familiar with gives me greater confidence,” says Sandell, who finished eleventh in Sweden in 2011. Another Swede completes the quintet of drivers starting in a MINI WRC, in the form of Richard Göransson, who finished 17th  overall in 2011 and will line up for the Rally Team Sweden.

With Armindo, Paulo, Dani, Patrik and Richard all in MINI WRC cars, MINI fans are in for a real treat in Sweden, and can look forward to a spectacular round of the WRC. The first special stage begins in Karlstad at 8:04 pm local time on Thursday evening.