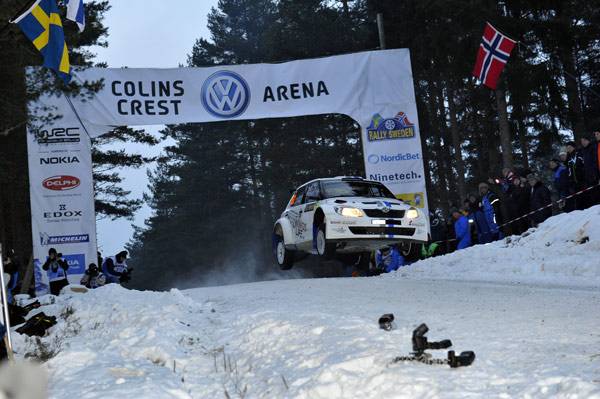 Victory on ice and snow: the Volkswagen factory team successfully concluded the test outing in the Rally Sweden, round two of the FIA World Rally Championship 2012, and collected valuable experience for the future rallies with the Polo R WRC. Sébastien Ogier and his co-driver Julien Ingrassia (F/F) took class victory with their Škoda Fabia, their team mates Andreas Mikkelsen and Ola Fløene (N/N) clinched third place. With more than 200,000 spectators looking on they regularly left more powerful WRC cars trailing in their wake on the way to eleventh and 14th in the overall standings.

“The Rally Sweden is one of the real highlights of the World Championship season since it is only here that spiked tyres are used on snow and ice throughout the entire event. The character is unique and it was equally important for our team to collect experience in order to be as well prepared as possible next year with the Polo R WRC,” explained Volkswagen Motorsport Director Kris Nissen. “Sébastien Ogier and Andreas Mikkelsen effectively controlled the Super 2000 class and were not only fast in the process, but also drove very reliably and within their limits – our two Fabias ran without problems, so many thanks to our team also for the excellent work.”

The Rally Sweden, which consisted of over 350 kilometres run against the clock on 24 special stages in the Swedish province Värmlands Län and in neighbouring Norway, provided spectators with rallying in its most spectacular form. The high speeds, long drifts and big jumps on the icy tracks set the hearts racing of the many rally fans lining the stages. Compact special stages close to the service park in Hagfors and head-to-head duels around the floodlit horse racing course in the start and finish area in Karlstad also inspired the spectators. The two Fabias of group brand Škoda fielded by Volkswagen Motorsport numbered among the crowd’s favourites from the very beginning. Sébastien Ogier took the S2000 class lead on the opening stage. With eight top-ten results and much to the enjoyment of the many fans he repeatedly moved into the leading group of the more powerful WRC.

“That was a very good rally for us. I’m very happy with our class win. The conditions on the stages were better than expected and it was great fun to drive here. Our pace was very good and because our team mates were also very fast the rally was interesting and informative for the entire team. After all is said and done and it was also the first rally on snow and ice with spiked tyres for our team,” said the 28-year old Frenchman. Not even a puncture on the twelfth stage or changing the fuel filter after the 18th stage could slow Ogier/Ingrassia.

The 22-year old current Intercontinental Rally Challenge (IRC) Champion Andreas Mikkelsen enjoyed the stages through his homeland Norway on Friday was able to match his team mate’s pace throughout, before losing valuable time and a near certain second position in the class after suffering a puncture on the 22nd special stage.

“My second rally with Volkswagen was a very, very good experience – it was obviously a great shame to lose second place within sight of the finish. Our first event together last year was the first WRC rally for the team. It was great to see just how much the team has developed since then. The teamwork is fabulous,” said the Škoda UK driver who, together with co-driver Ola Fløene, contests selected rounds of the WRC for Volkswagen this year and otherwise aims to defend his IRC title. “When compared with the IRC events you must change your approach a little in the WRC. The rallies are longer, but at the same time you have fewer opportunities during the service breaks. You can’t drive so uncompromisingly, but want to be just as fast.”