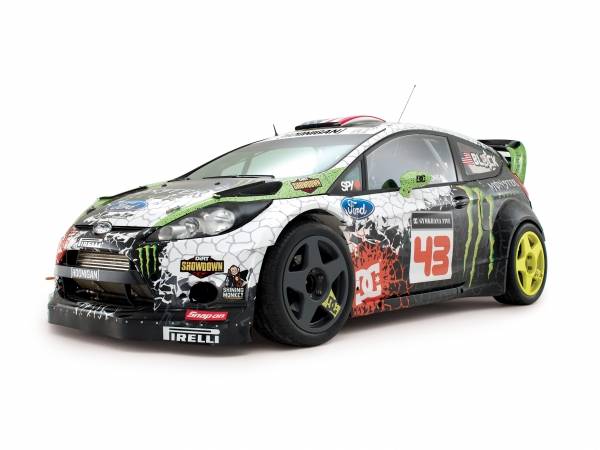 The wait is finally over (in case you were actually waiting) – Ken Block and Monster World Rally Team dropped the covers and revealed new livery of Block’s Fiesta. And it’s stunning. Really.

American driver is expected to take part in the World Rally Championship this year but only on few selected events.

Namely, Block will compete in Mexico, New Zealand and in Finland, which is good way to cover the globe in only three events. However, knowing Ken, this is but a little part of all the fun stuff he plans to do in 2012.

But, to begin properly, here’s a presentation video by Monster WRT and Ken Block talking about Ken Block’s plans for Ken Block. Or something like that. Enjoy!

The Monster World Rally team is pleased to reveal Ken Block’s brand-new livery and 2012 schedule. Debuting for the first time in part one of a two part season launch program (part two arrives on February 20th), Block’s 2012 program brings forth not only a new look for the Master Hoonigan, but also a new focus and more varied direction moving into the 2012 race season, which includes campaigning a full season in the highly-anticipated Global RallyCross Championship, while continuing to compete in the World Rally Championship.

“I’m super stoked to be able to run such a diverse schedule this year,” said Block. “Global RallyCross is shaping up to be a very exciting and new championship here in the United States and I’m looking forward to the new challenges that will bring. I’m also thrilled that despite committing to the full GRC season, I’m still going to be able to fit three WRC events into my schedule, as well as a handful of Rally America and Canadian Rally races. I don’t think there’s another driver out there that gets to compete in so many different series, as well as gets to do awesome side projects like Gymkhana FIVE and my Gymkhana World Tour. I’m truly a lucky bastard because this is going to be an amazing year!”

Three different Ford Fiestas will aid Block in his 19-event attack this year. Each cloaked in a fresh, new graphic scheme, which also carries over to an entirely new line of team gear available from DC. The Hybrid Function Hoon Vehicle (H.F.H.V.) will take on the lion’s share of events, competing in all the GRC rounds and X Games, plus select Rally America and Canadian rallies. It will also return to star in Gymkhana FIVE, which will debut mid 2012. While the M-Sport prepared Ford Fiesta RS WRC will be used at Rally Mexico, Rally New Zealand and Rally Finland. Leaving the Olsberg MSE-built four-door Fiesta on the road for the 5 stops of the Gymkhana World Tour.

“We really went all-out for our launch this year,” said Block. “I phoned in favors to two great friends to assist in our launch videos. My buddy, actor and comedian Nick Swardson, came out in a huge way and took my place to give some ridiculous answers to questions during the first part of our season launch program in our 2012 Q&A video. Also, my long-time friend and fellow DC athlete, skateboarder, Steve Berra came out to lend his video skills on the second part of our season launch program, our schedule and livery reveal video. They both absolutely killed it and I’m beyond stoked with the results.”

For the 2012 season, Block and the MWRT would like to welcome three new sponsors: Shining Monkey car care products, Snap-On tools and the all-new DiRT Showdown videogame. Block and MWRT would also like to thank the following sponsors for their continued support moving forward into the 2012 season: Monster Energy, Ford, DC Shoes, Pirelli, Hoonigan, SPY Optic, GoPro, Alpinestars and Ryno Power.