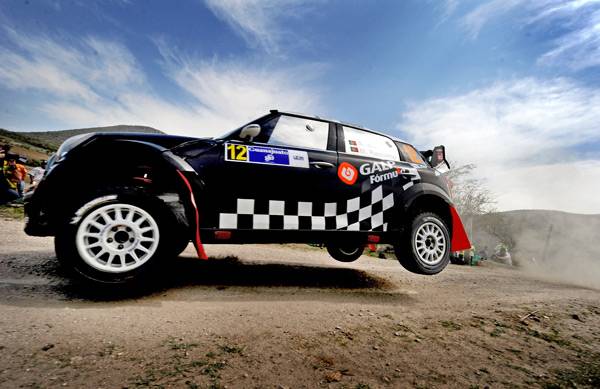 After Monte-Carlo’s Tarmac and Sweden’s snow, the Motorsport Italia-run WRC Team MINI Portugal has travelled all the way to Central America and is now ready for Rally Guanajuato México, third round of the 2012 FIA World Rally Championship and first proper loose surface rally of the season. They will also be flying the flag for MINI on the manufacturer’s first long haul WRC event.

For his 2012 gravel première, WRC Team MINI Portugal No. 1 driver Armindo Araújo moves back into his comfort zone and has his sights set on a top 10 finish on his first outing overseas in his MINI John Cooper Works WRC. The Mexican stages are familiar to Araújo thanks his 2010 outing at the rally when he not only won the PWRC event but also finished in the top 10 overall with a Group N car. Despite knowing that the conditions are going to be tough and not having tested his MINI before the event, the talented Portuguese driver is confident about the weekend and with the stages similar to the ones of his home event Rally de Portugal, he is optimistic about scooping a good result.

Paulo Nobre’s Rally México début also marks the first time the enthusiastic Brazilian will compete in a MINI John Cooper Works on his home continent. Nobre – who stole hearts of fans’ across Europe at Rallye Monte-Carlo and Rally Sweden – is both determined to become the new idol of the Mexican crowds and intent on enjoying every stage and surviving the treacherous conditions. Used to off-road events, the Rally México conditions are not new to the São Paulan and he will do everything he can to make his fans and WRC Team MINI Portugal proud this weekend.

Armindo Araújo: “I really like Rally México, this is my first outing here with the MINI but I was here in 2010 so I know it’s a tough event and the altitude makes thing really difficult. Regardless we’ll do everything we can to do a good job and finish in the top 10. We’ll try to find a good rhythm from the beginning and make sure we crack a suitable set up which will also help up for Rally de Portugal and the other gravel events this season. Returning to Rally México is great, we have really good memories from 2010 when we won PWRC but this year the aim is different – we’ll go as fast as we can, avoid mistakes and punctures and try to pick up some Drivers’ points.”

Paulo Nobre: “I’m really looking forward to the stages in México. They’re completely new to me and I can’t wait to experience them and introduce my Porquinho Verde to the Mexican fans. I’ve already seen some of the spectators around and the crowd seems fantastic. Let’s hope it’s an exciting event for them, I will do my best to make sure they don’t forget it!”

Bruno De Pianto, Team Manager: “Rally México is a fantastic event, probably one of my favourites in the WRC calendar. There’s a unique atmosphere and the fans are so enthusiastic about the rally – it’s really amazing. For sure it’s a tough event due to the altitude and the hot temperature but we’re confident and we’re aiming for a top 10 finish for Armindo. The conditions are very similar to those at Rally de Portugal so he feels a little bit ‘at home’. It’s Paulo’s first time here so the aim is to complete all the stages successfully and to enjoy the experience of being one of the first drivers to compete on a WRC long haul event in a MINI.”