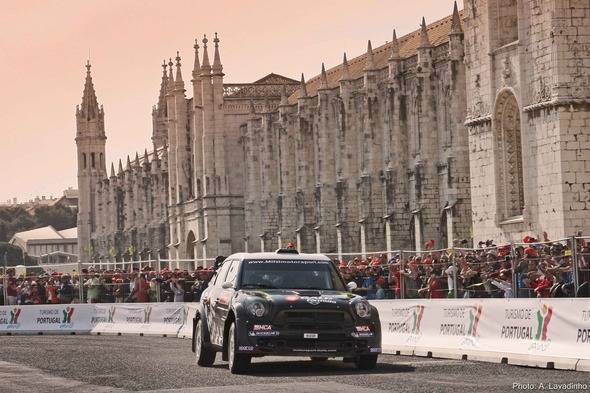 The day got underway with the Lisbon Super Special Stage – run beside the Jerónimos Monastery, a UNESCO World Heritage Site – where thousands of fans gathered to cheer on national hero Araújo. On the 3.27km Tarmac stage, the Portuguese driver set the 7th fastest time overall, only 4.3 seconds behind stage winner Petter Solberg.

Three competitive night stages followed and were made even more challenging by the rain. Araújo was determined to make a cautious start trying to find a good rhythm but unfortunately a mistake in the pace notes made his MINI John Cooper Works WRC slide off the road 1km into SS2 costing him nearly 5 minutes. However, the Portuguese fans, never to let their hero down, turned out in force to help the crew get their MINI back on the road and in the competition.

Refusing to lose his focus, Araújo tackled SS3 with consistency, clocking the 10th time overall 37.7 seconds off stage winner Jari-Matti Latvala. Despite losing more time due to a cloudburst which soaked the first part of SS4, he is now looking for a fresh start tomorrow.

Armindo Araújo: “The support from my home crowd has been as fantastic as ever and the atmosphere in Lisbon was incredible. We made a mistake at the beginning of SS2 – we had a wrong pace note and the MINI slid off the road 1km into the stage. We were pushed back on the road by spectators but unfortunately we lost about 4 minutes 30 seconds. That is rally though and these things can happen. We’ll start afresh tomorrow and we’ll do our best to win back some of the time we lost. Of course I’m a bit disappointed but the rally is still very long and anything can happen. Our MINI didn’t have any problems after we went off and I’m pleased with its performance.”

The second day of Rally de Portugal will feature six special stages – three run twice – around the Tavira area, covering 132.68km. The action starts at 11.00 when the cars leave the Algarve Stadium for another long day battling on the Portuguese gravel.