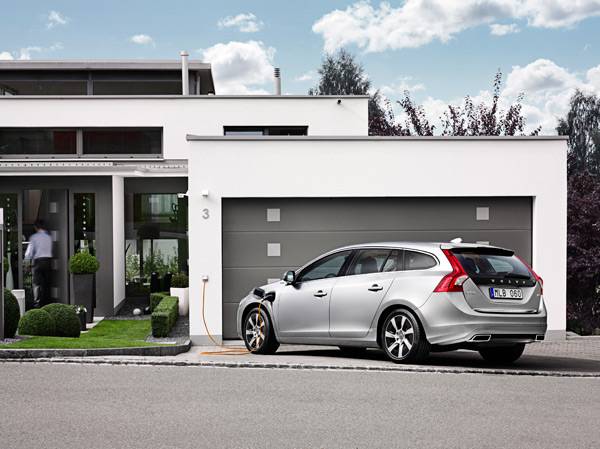 There are many hybrids on the market, but none of them can match the Volvo V60 Plug-in Hybrid.

The world’s first diesel plug-in hybrid is Volvo Car Corporation’s most technically advanced model ever – an electric car, hybrid car and muscle-car all rolled into one. At the mere touch of a button you can choose which of your three cars you want to drive at any given moment in time.

The production version of the V60 Plug-in Hybrid will be launched in just one colour – Electric Silver. Sales get under way at the start of 2012, and the first cars will be built in the autumn of that year.

“Our plug-in hybrid has received considerable attention since it was unveiled at the Geneva Motor Show in 2011. Now we’re taking the next step by presenting the production model, which is graced with a distinctive profile featuring a spectacular silver colour, an exclusive interior and generous standard equipment,” says Stefan Jacoby, President and CEO of Volvo Car Corporation.

The first 1,000 units of the Volvo V60 Plug-in Hybrid are only available in Electric Silver livery. The car is also distinguished by aero-designed 17-inch wheels, integrated exhaust tailpipes and a number of bodywork features in glossy black, such as the grille and the aerodynamic front spoiler.

The chromed “Plug-in Hybrid” emblem is found both on the lower part of the tailgate and in a smaller version on the front wings.

The interior of the V60 Plug-in Hybrid has black leather upholstery with contrasting stitching and inlays of blue-grey wood. Other distinctive interior details include a leather-covered steering wheel, specially designed mats and a gear lever knob with integrated indicator.

The V60 Plug-in Hybrid is the first Volvo to be launched with an entirely digital Driver Information Monitor (DIM). The conventional analogue gauges have been replaced by a one-piece LED screen offering a large number of display options. The driver can choose which information to show via the car’s menu setup.

It is also possible to communicate with the car via a mobile app. This gives the owner access to a number of smart functions such as air conditioning, pre-cooling and after-cooling, and a reminder to connect the charge cable if this has not been done by a predetermined time.

The first Volvo with the D6 badge

On the car’s tailgate there is a D6 badge. The reason is that the combined performance of the five-cylinder turbodiesel and electric motor puts the car firmly within the same horsepower range as the petrol powered T6.

The front wheels of the V60 Plug-in Hybrid are powered by a five-cylinder 2.4-litre turbodiesel producing 215 hp and maximum torque is 440 Nm. The car has a six-speed automatic transmission.

The rear axle is powered by an electric motor producing 70 horsepower. The electric motor is supplied with power from an 11.2 kWh lithium-ion battery pack installed under the floor of the load compartment.

The sophisticated and exceptionally compact battery pack consists of 10 modules each containing 20 cells. An integrated computer monitors the system and compares temperature and charge level in each of the 200 cells. The battery pack also has an integrated water-cooling system driven by the car’s climate unit.

The driver selects the required driving mode via three buttons that give the car three entirely different temperaments: Pure, Hybrid or Power.

In Pure mode the car is powered solely by its electric motor as much as possible. If the battery pack has been recharged with electricity from renewable sources, its range is up to 50 kilometres and its carbon dioxide emissions are zero. The electric range varies with terrain, climate and driving style.
Hybridis the standard setting whenever the car is started. The diesel engine and electric motor cooperate to ensure optimal balance between driving pleasure and environmental footprint. CO2 emission (NEDC, mixed driving cycle for certification) is 49g/km, corresponding to diesel consumption of 1.9l/100km. The car has a total range of up to 1,000km.
In Power mode the technology is optimised to give the car the maximum possible power. The diesel engine and electric motor have a total power output of 215+70 horsepower and maximum torque of 440+200Nm. The electric motor’s lightning-quick torque delivery contributes to the car’s acceleration from 0 to 100km/h in 6.2 seconds.

Save battery power for later

The driver can choose to save battery power in order to drive on pure electricity later on, for instance in an urban green zone or in the heart of a city.

The aim is that the Save mode should ensure there is sufficient battery power for about 20 kilometres of driving on electricity alone.

Charge at home – cooling or heating in advance

It is also possible while recharging the car to heat or cool the passenger compartment to provide a more comfortable start of your journey. This also means that more battery power is used for actually propelling the car.

The pre-conditioning function can also cool the batteries. The ideal operating temperature for the battery pack is 20-30°C. This means that cooling prior to driving is very important in order to maximise battery charge and thus also range.

However, owing to the electric motor’s lower power, torque to the rear wheels is limited and four-wheel drive is active up to 120 km/h.

When four-wheel drive is activated, the diesel engine operates continuously and the generator ensures that the charge level in the battery pack is sufficient to supply the rear axle with the necessary power.

A two-stage braking system is yet another smart feature of the Volvo Plug-in Hybrid. When the driver presses the brake pedal, the system starts braking the rear axle’s electric motor. This braking energy is then used to recharge the car’s battery pack.

The mechanical brakes are activated only when the situation requires more braking power than the rear axle can provide.