Mini: “Thank you Argentina and your wonderful fans!” 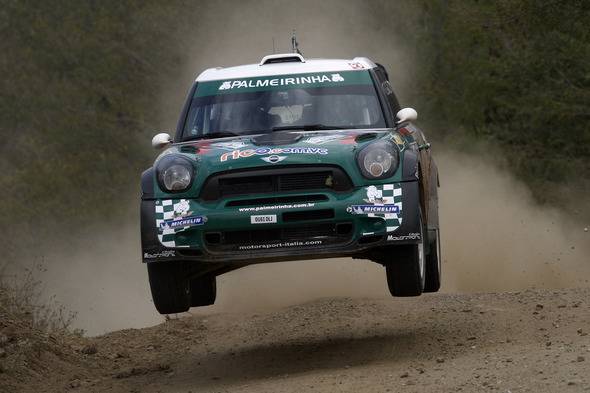 Paulo Nobre and Armindo Araujo enjoyed their time in Argentina, although rally did not go so well for either of them. I must admit I am still not 100% convinced about this team, or rather about BMW’s decision to do what they did. However, it’s hard to see where BMW is aiming with their decisions and ideas, and at the same time I have no doubt that WRC Team Mini Portugal is doing their best out there on the stages.

To be perfectly honest, it’s quite silly for me to bash anyone and complain about Araujo being slow and Nobre being even slower, not to mention his apparent love for Rally 2, when they’re both faster than me! On the other hand, by this logic every WRC journalist and reporter would not be qualified to judge drivers’ qualities and performance. But I digress.

BMW did what they did, current Mini works team is not really title contender material and will not challenge Citroën, Ford or any of the top privateer teams for the podium, but they are here, they are trying as best as they can and I suppose we should be happy about it in a way. And what they seem to be lacking on stages, they provide in their spirit. For Rally Argentina they decided to use comedian Nobre to “host” their daily reviews, as well as describing the highlights of the rally.

And this is exactly what follows here – Rally Argentina review by Paulo Nobre and his team.

Thank you Argentina and your wonderful fans!

‘Today at Rally Argentina I drove the longest Special Stage of my entire rally career, the 65.74km Matadero – Ambul stage. Of course I’ve driven longer stages in cross country but in a rally it was the fist time. The stage was really fast and I got so tired by the end of it, but – gosh – it was incredibly beautiful. I really hope it continues to be part of the itinerary of Rally Argentina in the future because it’s a really great stage.

‘After that there were two small Special Stages – Mina Clavero and El Condor – and for me those are the most iconic stages of Rally Argentina, when I think of Rally Argentina I think of those stages. They are really twisty and narrow tests with a lot of rocks, quite tough for my MINI ‘Porquinho Verde’! We completed them really well in the morning and we arrived in the Service Park at lunchtime really happy and motivated to finish the rally. This was a great boost of confidence after all the problems Edu and I had in Sweden, Mexico and Portugal.

‘However, in the afternoon loop the car didn’t survive many many hits. It wasn’t one specific hit or one specific stone that the car couldn’t survive but a combination of many. Then parts started to brake on the MINI and eventually the suspension broke and finally the wheel came off on SS17. It was game over, we had to stop!

‘Where we stopped there was an Argentine family who made us coffee and tea and gave us some food. Everybody else left the Special Stage after it was finished, there were many many people – it was incredible how many spectators came to watch the rally – but even after everybody else left the kind family stayed, they started a fire and gave us more drinks. They were very very kind. Normally Brazilians think that because of the the rivalry in soccer, Argentinians will treat them very badly but wow these people were so kind with us because we all loved rally!

‘Unfortunately our team mates Armindão and Miguelito retired on the same stage as us, It was a real shame as they were getting consistently good times but they suffered constantly on the stages despite their incredible control of the MINI. They stopped two kilometers after us with a broken steering arm and while they were waiting for the recovery vehicle, Armindo fell asleep in his MINI and the fans took a lot of pictures of him sleeping in the car and they came to show us and the family. It was quite funny!

‘This is the fourth rally in a row I haven’t finished. Of course that’s not good for our motivation but I need to realize that rally isn’t easy and that is why it means so much when you succeed. If you can’t handle it you have to change sport and play chess! Now it’s a new page for a new rally. Rally Argentina wasn’t the first bad rally of my career and it won’t be the last. My head is now on the Acropolis Rally, an event that I know a little bit because I competed there last year – I’m really hoping for a better result there!

‘Now I’m looking forward to go to my house in Brazil to recharge my battery but I know that in a few days my rally ‘bug’ will be reignited and I’ll be ready for another rally!

‘I really hope you’ve enjoyed this ride on board with me and the WRC Team MINI Portugal. We’ll be back for more action from 24 to 27th May at the Acropolis Rally in Grecce, stay tuned!

‘Thank you very much for all your support throughout this weekend!
Paulo ‘Palmeirinha’ Nobre