Citroën favoured by the Rally of Gods 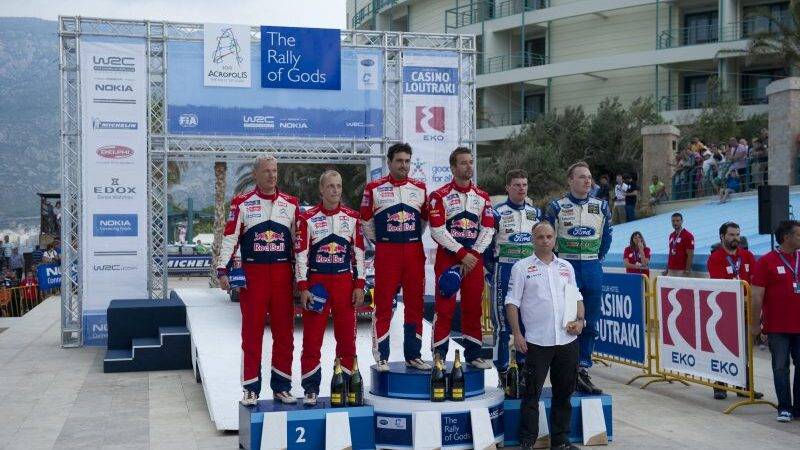 Dubbed the ‘Rally of Gods’ by the organisers, the Greek round of the WRC saw Citroën Total World Rally Team reach Elysium with a superb overall result.

The Sébastien Loeb/Daniel Elena and Mikko Hirvonen/Jarmo Lehtinen crews recorded their third one-two finish of the season to go with those obtained in Mexico and Argentina. Sébastien Loeb and Citroën therefore extend their lead at the top of the World Championships, while Mikko Hirvonen moves into second place in the Drivers’ standings.

After two long days of racing, the final leg of the Acropolis Rally seemed somewhat easier. The 65km of timed stages were split into two loops, interspersed with a thirty-minute stop at the service park. With a mere 10-second advantage over Petter Solberg, Sébastien Loeb flew off on the Aghii Theodori stage, pushing to the max. After a few kilometres, a message appeared on the DS3 WRC’s dashboard informing him that he could ease off a little: “Petter was reported to have come to a halt on the stage, so I stopped pushing so hard. After I passed him, I thought to myself that it would have been difficult to maintain the same pace right to the end, given how many potholes and rocks there were on the road!”

Solberg’s retirement enabled Mikko Hirvonen to move into second position. When he returned to Loutraki, the Finn looked somewhat incredulous at events: “I can hardly believe that I’ve moved up to second position. I haven’t been pushing since midway through yesterday to try and hold onto my position and secure a good overall result for the team. And now it looks like we might finish with a one-two!”

As it had been predicted that this Acropolis Rally would see plenty of unlikely twists and turns, SS20 left the team in a cold sweat. At the second split, Sébastien Loeb was one and a half minutes behind the pace-setter. The no.1 DS3 WRC lost no further time to the end of the stage, at which point Seb confirmed that he had been hit by a puncture: “I don’t know what happened, but I felt that we had a flat tyre after three kilometres. It would have been impossible to make it to the end like that, so we stopped to change the wheel. Everything went well and, in the end, our lead didn’t come under threat.”

The rally concluded with the Power Stage, which was run on the first few kilometres of the Aghii Theodori stage. With the pressure finally off, Sébastien Loeb completed a masterful weekend’s performance on this relatively smooth stage by taking the fastest time and with it, the three bonus points. Third fastest on the Power Stage, Mikko Hirvonen also grabbed an extra point. “We managed this race well, despite the constant pressure we were put under by our rivals,” said Loeb, who now boasts 71 career world championship wins. “I never lost my cool at any point, even when we got a puncture, because I knew we would still have enough of a lead. It is worth highlighting that we were able to count upon the unwavering reliability of the DS3 WRC.”

“Yes, my thoughts are with the technical team when we talk about this one-two finish,” added Mikko Hirvonen. “We had no mechanical problems on either car; that is a truly exceptional achievement on a rally like this one. As far as I’m concerned, I am still surprised to have finished second, but I had to be consistent and not make any mistakes. I am really looking forward to the next two rallies in New Zealand and Finland!”

“When you look at the road surface conditions faced by the cars and the teams on this rally, you can but admire the overall performance of the team,” emphasized Frédéric Banzet, Citroën General Manager. “The DS3 WRCs and the two crews were perfectly reliable. Citroën, Sébastien and Daniel extended their lead in the World Championship, so as we approach the halfway stage of the season, our assessment of the results achieved is very positive. As has been the case in recent rallies, Mikko and Jarmo produced a solid performance, enabling them to move up into second place in the Drivers’ standings. Once again, I’m very proud of the best rallying team in the world.”