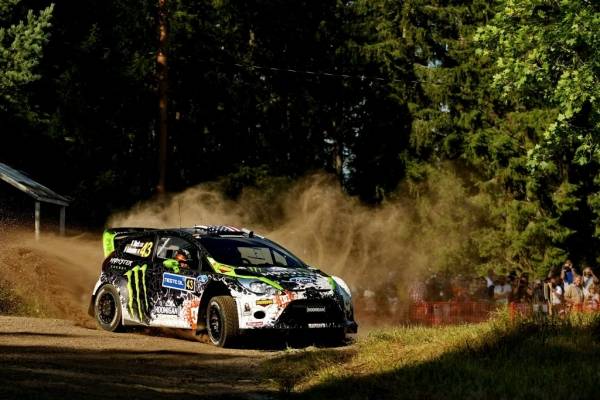 Gone for a few days, and all Hell Broke Luce (see below for this obvious spelling error). Well, it wasn’t exactly few days, and it’s not exactly hell, but for a slow time in the year and summer at full swing, there are plenty of news and gossip flying around the rally paddocks.

One of the most interesting ones concerns the World Rally Championship and it’s ongoing struggle with lack of media coverage and global promotion. Next month we’re bound to learn the fate of this problem, when all FIA’s officials and delegates and whatnots return from vacation. Rumour has it that role of global promotion will go to none other than Red Bull Media, effectively confirming the agenda this brand has in taking over the world. Whether you like a can of RB from time to time, or you prefer good old coffee, I believe Red Bull (pictured, did I get it right?) would know what to do with the WRC – if nothing else, they’re no strangers to promoting sports and brands, and they do have the most important ingredient for it – cash.

Next big one is supposed erradication of Intercontinental Rally Challenge into some kind of new format, which would include FIA’s European Rally Championship as well. This is quite the WTF moment, but admittedly I didn’t have time to properly dig for sources and clues so hard to say what exactly is going on. IRC’s future was already questioned by many – despite the championship being well organized and covered (certainly better than WRC in some aspects), lack of manufacturer interest and few other things (such as my personal impression that it’s somehow lacking character) mean it’s not exactly looking into bright days ahead. According to rumours and reading between the lines. This topic is interesting however, especially if it would bring IRC and ERC in combination, although it remains to be seen how much of this is actually based on facts. My main ? moment is the alleged introduction of two separate series, combined into one – such separations rarely work as intended. It would be so nice to be able to find more info on this subject, but alas, rally is still not football, so we can not hope to find info about it in mainstream media, but we can surely find info on when was the last time Luka Modric farted and what his fart smelled like – seriously, fuck that and fuck the sheer amount of media presence this sport enjoys.

And speaking about media, there is another news concerning what remains of WRC dedicated news and similar sites. MaxRally recently announced their plans of reorganization, which includes shutting down their current website and turning it into some kind of media outlet in future, while the news content would be delivered through mobile apps. There is also talk about Becs Williams and Colin Clark being part of future WRC radio and MaxRally writers promised to be equally involved with the WRC.com, championship official website, effectively merging MaxRally with WRC.com in some format (if I read that correctly). What part Red Bull has in all this, if any, it’s hard to say, but it’s nice to hear even more efforts will be put into maintaining and running of WRC.com. And we can only hope that arrival of proper promoter will encourage even more media enterprises dedicate their time to WRC and rally in general.

I’m pretty sure I missed few key pointers, maybe I missed all of them, but it’s summer, and there is more work to be done, and some sun to be enjoyed, so I’ll be heading off now. Oh, and the song reference is right after this link, but don’t follow it if you’re not fan of things like Swordfish Trombones and such.

Excuse me while I kiss the sky!