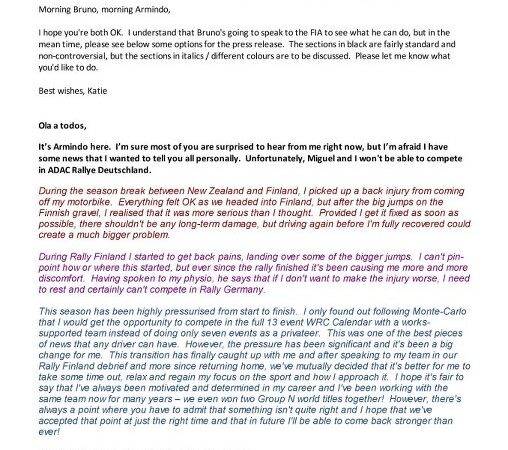 What follows is official response by Armindo Araujo in a matter of him being kicked out of Motorsport Italia run team, also known as some-kind-of-official Mini works team. Of some kind.

Armindo explained how the process of his “elimination” went through, and also included one nice gem – screenshot of email he received from Motorsport Italia, discussing the layout for final press release, meant to inform the general public of Araujo’s inability to compete in Germany due to injury.

This is both funny and sad, but I am quite certain not very rare in world of top sports and careful PR management. Well, this one wasn’t that careful. And it got me thinking – who is writing those “Hi, it’s Bruno” and “Ola a todos” press releases we’ve been receiving from Motorsport Italia over the course of the year?

Following the media release issued by Motorsport Italia, informing that Armindo Araújo and Miguel Ramalho will no longer be part of WRC TEAM MINI PORTUGAL, Armindo Araújo considers that now isthe right time to issue this statement after compiling all the facts and seek the truth. Therefore hewould like to clarify all points linked to this matter:

I- There were clear objectives set for the project in 2012. We started the season with avery interesting result in Rally Montecarlo but only in Rally Sweden we launched theWRC TEAM MINI PORTUGAL. From Rally Mexico onwards, Motorsport Italia attempted tocamouflage all technical problems and blame the faults of the same, to the driversArmindo Araújo and Paulo Nobre. From this moment also, Motorsport Italia, tried to object against my Media Releases, arguing that there were negative mentions to the team and Mini itself. I would like to reiterate that all Media releases were previously approved by Mini Portugal and in no circumstance there were no negative references tothem. I always defended the team and brand with whom I was linked to.

II – To prepare the asphalt phase of WRC and the new MINI JCW WRC version 01B, I was invited by Motorsport Italia, on the 17th of July, 2012, for a test program to be held in Italy between 10th and 12th of August. Only on the 8th of August, 2012, I received the GPS coordinates of the location. During the three days I’ve stayed in Italy and I was not allowed to test the car, instead I was put under pressure to declare myself sick and to take part of Rally Germany – in attachment proposal from Motorsport Italia, of my incapability, writing their own text to communicate the “disease”. At that time I could not believe I was receiving such proposal or suggestion.

IV- On the 17th of August, I informed Motorsport Italia, MINI Germany and MINI Portugal that I have collected all necessary documentation about this matter and deliverit to my team of lawyers, lead by Dr. José Pedro Gomes, who will take all necessary legal actions to protect my name and as well the project which I respect enormously and now sees national values in stake.

V- It has been always my position to seek for the truth and respect the justice. All my Sponsors have been already informed of all the facts and support me entirely on my decision to take this matter to legal action. For all said above, and due to the straight link to my image, myself and my sponsors agree to remove all the advertising of car number12 of WRC TEAM MINI PORTUGAL.

To finish, I would like to inform that according to my duty, I have reported all the facts to FIA, and I am currently waiting for their feedback, believing that the truth is above all, and the good name of myself, my Sponsors and my Country is reestablished and honored respectfully. 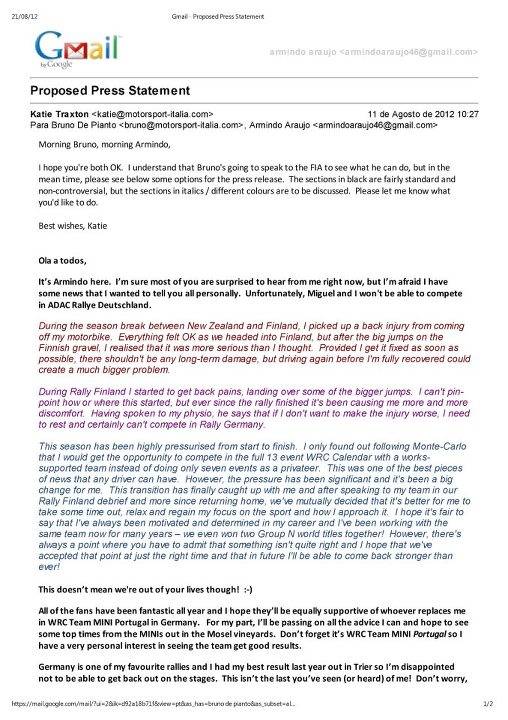