Citroën unveil their colours and it’s all gold 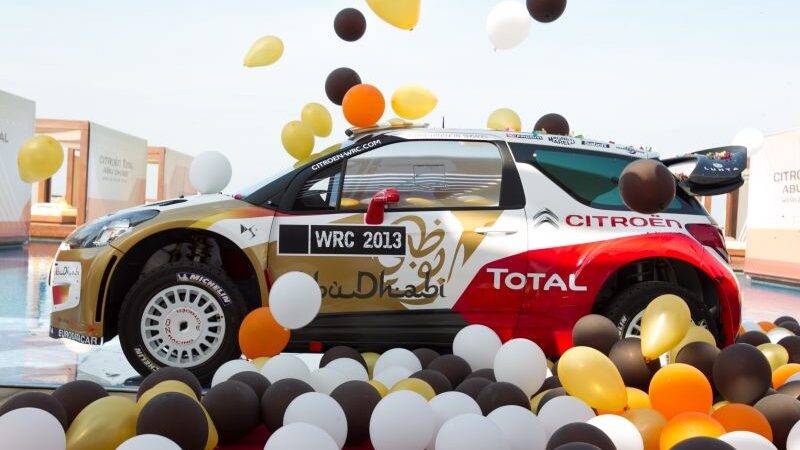 I am a bit more calm now – perhaps Citroën will at some point follow Ford and call off their WRC programme (to make way for sister PSA company Peugeot, no doubt!), but for now they seem to be as serious and determined about their job as ever. In fact, they’re so determined that they refused full retirement to Sebastien Loeb and forced him to take part in few more rallies next year. Poor old Seb, he just wanted to relax a bit and do some GT racing, but Citroën said no. His only chance to avoid the draft was to demand number 1 status in team. Surely they would not be able to do that! Ha ha!, said Citroën and awarded him with number 1 sticker instead. So there’s that.

New car is missing some colours, gone are blue and yellow, along with the Red Bull partnership, only to appear on the cars of that other team with bigger than life budget and some very fast drivers. Instead, Citroën’s WRC machine is now clad in golden armour, and it’s Champion of champions will lead them once again as he appears four times during 2013. The Golden Boys will be seen racing around the stages and the battlefields all around the world – from World Rally Championship to Middle East Rally Championship. Led by their Fearless and (Re)Tire(d)less Leader and with both Northern and Souther car markets covered by their Scandinavian and Latin drivers, who can stop them?

Oh, and I was wondering, can we call Sebastien Loeb’s 2013 appearances a cameo?

A bit more serious official release from Citroën follows below.

Following on from the announcement at the 2012 Paris Motor Show, the title partnership agreed between Citroën Racing and Abu Dhabi now takes real shape with the presentation of the racing programmes for the 2013 season.

Some 3,700 miles and just over a month lie between Monte-Carlo Beach, the idyllic location chosen to present Citroën Racing’s 2013 racing programmes, and the start of the Rallye Monte-Carlo. Forty days, to be precise, in which to fine-tune preparations for a new season set to feature several significant changes. Obviously, the most visible of these concerns the arrival of Abu Dhabi as title partner for the eight-time World Rally Championship-winning team.

“We are very proud to have forged a relationship with a partner that is as prestigious and dynamic as Abu Dhabi,” emphasized Yves Matton, Citroën Racing Team Principal. “Like our long-time partner Total, Abu Dhabi will be visible across all our 2013 programmes: on the works teams competing in the WRC and the MERC (Middle East Rally Championship), but also in the Citroën Racing Trophy held in the main countries in Europe. Together, we are also committed to establishing a rally driver development programme with Abu Dhabi Racing.”

The eight-time World Rally Championship-winning works team – including five consecutive titles between 2008 and 2012 – will now be known as the Citroën Total Abu Dhabi World Rally Team. Three cars will compete at each of the thirteen rounds on the WRC calendar. Lining up in all of the events in the no.2 DS3 WRC, Mikko Hirvonen and Jarmo Lehtinen will be looking to win the Drivers’ title. “Now that I have my first season with Citroën under my belt, I feel ready for this new challenge,” asserted the Finn. “I have been World Championship runner-up four times, so the next logical step is to aim for first place!”

The second DS3 WRC nominated to score points towards the Manufacturers’ World Championship will be driven by Sébastien Loeb and Daniel Elena at four rallies. “We’ll start the season in Monte-Carlo and we’ll also be competing in Sweden, because it’s a rally that I would love to win in normal racing conditions. And I couldn‘t begin to think about missing the Rallye de France,” confirmed Seb. It should be noted that the no.1 will only be assigned to the nine-time World Champions in 2013. Back in the Citroën team, Dani Sordo and Carlos del Barrio will compete in at least eleven rounds and will be nominated to score points for the Manufacturers’ standings when Loeb/Elena are not competing. “I’m incredibly pleased to be back with the team. The first test sessions went very well and I’m ready to help Citroën win more titles. My personal goal will be to win my first rally in the WRC.”

The team’s newcomer, Khalid Al-Qassimi will start his season in Sweden in a racing programme featuring eight WRC rallies. The United Arab Emirates driver will also be looking to win the Middle East Rally Championship (MERC) again. He will be driving a Citroën DS3 RRC sporting Abu Dhabi Citroën World Rally Team decals: “Joining such a successful team and competing on two fronts will undoubtedly help me to keep improving. After winning the title for the first time in 2004, winning the MERC again will be my main goal.”

The Middle East Rally Championship will also provide two young drivers with the chance to acquire valuable experience in a Citroën DS3 R3. The crews will be selected for this programme following a qualifying event in Citroën DS3 Racing cars held on December 7-9 at the Yas Marina circuit. “The varied and difficult nature of the MERC will ensure it emphasizes the qualities of the DS3 R3,” commented Marek Nawarecki, Customer Racing Manager at Citroën Racing. “The drivers will be selected using the same methodology that we apply in our European promotional formulas, and they will enjoy the same backing and support, geared toward helping them to improve in our programme.”