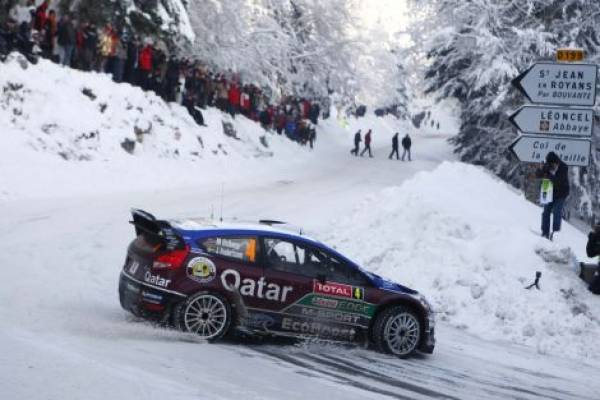 Rallye Monte-Carlo is treacherous at the best of times, but the 2013 edition of the legendary event witnessed some of the most difficult conditions the FIA World Rally Championship (WRC) has seen in years. Nevertheless, as always rising to the challenge, Qatar M-Sport’s Mads Østberg put in a sterling performance on his Monte debut to claim sixth place and get his championship campaign off to a solid start.

M-Sport’s Ford Fiesta RS WRC proved competitive throughout the rally with each of the four Qatar M-Sport drivers taking a fastest time from the event – Thierry Neuville on Shakedown, Evgeny Novikov on SS6 and SS7, Juho Hänninen on SS9 and Østberg on SS12. Equally inspiring, Novikov had been running in a strong podium position before succumbing to the perfidious conditions lying in wait through the fearsome ‘Col de Turini’ stage on the 14th test.

“I have never seen anything like the conditions we had today. There was a good layer of snow, but it was all slushy and wet so there was no grip at all – the car was just sliding around on the top.

“The first time through [SS14] we were just working to stay on the road. I was completely out of stage mode because there was nothing – you just had to try and be really careful on the throttle to find some grip.

“The second stage [SS15] was OK. There were a few slippery places at the top but it was driveable at least. But the next stage [‘Moulinet – La Bollene Vesubie’ – SS16] was just horrible. We hit a wall and had to stop in the stage to check that everything was OK. We bent something on the rear of the car and lost about five minutes but still we only lost one position so that was good at least.

“With the rally stopping now [after SS16], we have sixth position. Considering the conditions that we have encountered here, I am very happy to have finished the rally and to take some strong points away from what has been a really difficult event for us. We’ve learnt a lot and made a lot of progress, so that is something positive. Now I am looking forward to Sweden and an event that I know really well!”

“We ran wide on the third corner into the stage [SS14] – it was a very slippery one and the information from the gravel crew was not the same as the conditions on the road. The conditions were changing so quickly, and there was just no way for us to avoid what happened. We hit a stone wall and spun. We damaged the rear-left wheel and then had to stop about four kilometres down the road

“It is true that we were setting some really good times before this, but no-one will remember that; history remembers results so this is very disappointing for me. Having said that, we completed almost the entire rally and had some really good pacenotes up until that point – that means we should be in a really good position when we come back here next year.”

“I haven’t seen conditions like that ever before – it was horrible if I am honest! But in the end, most of the guys made it through and I didn’t. As I’ve been saying all weekend, I needed to be patient and make sure I learnt the car so I am very disappointed.

“After about 15 kilometres when we started the downhill section [on SS14] there was a very narrow line, and I lost it. If you leave that line then there is no grip and unfortunately it was all over for me. We hit a stone wall quite heavily. OK, the car was still driveable but with two stages to go it wasn’t worth the risk.

“On some stages we set some good times which was promising. I was hoping to set some better times but I need to be realistic. This was my first time in a new WRC car and my first time in the Ford. It was such a difficult rally and I was actually quite happy with my driving up until the mistake. I don’t think I could have done much better to be honest and we learnt a lot for sure. Now we just have to concentrate on doing a good job at Rally Sweden.”

“Obviously the rally didn’t end the way we would have wanted with Evgeny [Novikov] and Juho [Hänninen] not making the finish, but I think that there are still a lot of positives that we can take from this event.

“All of the drivers put in a great performance and I think they’ve all shown a lot of potential. When you take youngsters to an event like this it is always going to be a challenge. Experience counts for a lot here, and especially this year with some of the worst conditions the rally has seen in more than 20 years.

“The whole team is now looking forward to the challenges ahead. Looking at the performance these young guys have shown, I am sure that we will be in contention for some top results as the season progresses.”