Winter rally fairy tale in Sweden, by all accounts 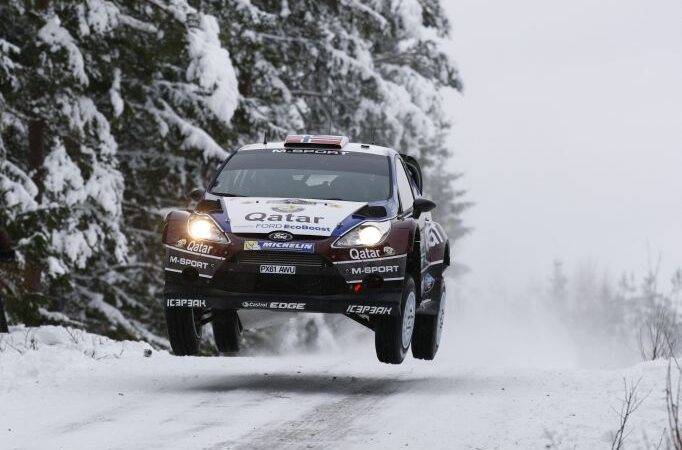 What a day of rallying in Sweden. Snow, ice, gravel and ambitious crews, what more can we ask for? Sebastien Ogier is in stunning form, and same can be said about the car he is skillfully piloting through forests and over the crests of Rally Sweden – the French skills and German engineering really are working in perfect harmony so far. As much as Ogier is trying to keep himself under control, he is having a very hard time battling the urge to jump out of the car and start dancing around the time controls, out of pure happiness. You can hear it in his voice, it’s that killer combination of confidence, satisfaction and a bit of “told you so” added on top. Great by all means. Ogier had a day full of action, but it was a controlled action and learning how to match his pace to that of the direct competitors. Which is quite interesting – if you recall, Sebastien Loeb used to say it is much harder to drive below maximum, it goes against the instincts, and it often serves as a very effective filter, separating uncontrolled racer boys from true masters of the show. For the moment, Ogier is very much able to control all aspects of his drive, whether it requires him to push hard or just nurse the car and maintain cruise speed. By cruise speed, I mean the speed required to win a rally. Nothing really cruisey about that!

Sebastien Loeb, meanwhile, is doing all he can, but he is also very open about the gap which is now too big to Ogier. Loeb said he will continue doing what he did today, and that is to keep the pressure on at all times, and be ready to make his move if he gets the chance. Time lost on first day was too costly to make up, and Ogier is showing no mercy to his former team mate, so Loeb is in a bit of a limbo at the moment.

Interestingly enough, he mentioned Polo again, praising car’s speed and consistency. To me that sounds almost like “I’m really interested in that car”, which of course he naturally is (in fact, I’m sure he is VERY interested in Polo and how it compares to his own weapon, Citroën DS3 WRC). After spending so much time in Citroën, building the ultimate rally beast of the decade, Loeb is obviously impressed by the pace and strength of this new team. As for Ogier, I am convinced both Sebs feel nothing but utmost respect for eachother. They are top drivers and their mutual respect goes beyond just words and usual, PR wrapped mumbo-jumbo. It’s next level, above us, we would not understand anyway.

There was a biggish drama in the battle for third place. Raging Norwegian Mads Ostberg got really Mads and jumped at the chance to snatch third place from Jari-Matti Latvala. All he needed was a temporary glitch in Jari-Matti’s confidence – something that is only normal in a new car, for now! – and Ostberg was right there, passing by and onto the provisional podium. Yet, only six seconds separates them, it’s far from over. Tomorrow really heads to Norway, and Ostberg is not shy about his chances on stages he knows well. We have not seen the last of this epic battle, the one in which even Sebastien Loeb could be under attack!

Matthew Wilson crashed out today, and later on Khalid Al-Qassimi was also forced out with radiator damage. Biggest disappointment of the day is no doubt the retirement of Pontus Tidemand due to technical problem. Great performance and very promising start. Juho Hanninen also had a rather gloomy day. Or shall I say, he had a great day, keeping Thierry Neuville well and under control up until the last corner of the last superspecial stage, in which Juho went into the snowbank, lost a minute and dropped behind Neuville. Perkele, if there ever was one.

To wrap it up, just need to say this one more time. Sebastien Loeb should not retire, there is still so much he can do in rallying, so much.