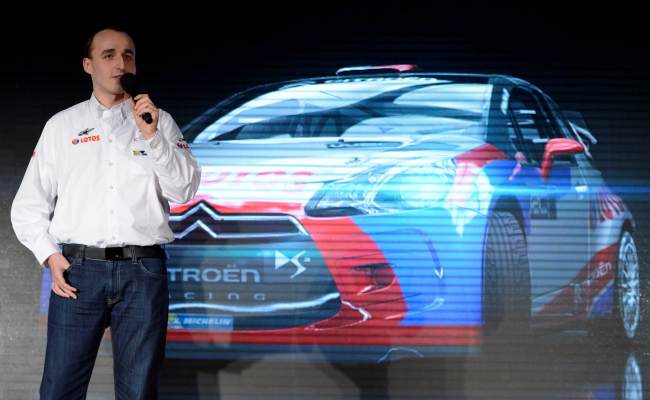 Robert Kubica is to begin his extensive rally programme in just a few days from now, competing in round three of the European Rally Championship, Rally Islas Canarias. Together with co-driver Maciej Baran, Kubica will pilot Lotos backed Citroën DS3 RRC on numerous ERC and WRC events this year.

In what can only be described as heroic and very inspiring return, Kubica will tackle some of the most demanding events in both calendars – after first event on Canary Islands, he will travel to Portugal to take part in fourth event of the WRC season, his first ever rally on gravel roads.

European Rally Championship website editors sat down with Robert and asked him a few questions about his plans for 2013. Needless to say, it’s a very interesting read! See for yourself.

Welcome to the ERC Robert. What made you choose rallying when you had options in circuit racing?

“I’m attracted by the very big challenge in front of me. It’s huge, one of the biggest, if not the biggest challenge of my life. Every rally will be a new discovery – and I might do more European championship rallies than currently planned – and that gives you more excitement. Also I’m a big fan of rallying from, following on the internet or watching on Eurosport. I was always looking to these guys and very soon I will be the guy doing those stages so it’s a really nice feeling for me.”

Given what happened to you in your accident were you not put off driving rally cars again?

“Unfortunately in motorsport accidents can happen. I don’t wish that something similar happens to other people but we have seen worse accidents in motorsport. Somehow my big passion to motorsport overall, including rallying, helped me a lot in these past two years to keep me focused to keep working and improve my condition.”

Did you always believe you’d come back and compete in international motorsport again?

“I would prefer to still be an F1 driver but my passion has led me to this programme and this is my focus although I cannot say how long for. One and a half year ago, if somebody told me I would be announcing a big programme with Lotos, Citroën and Michelin in the European championship and WRC I would not believe it. Normally I’m not an excited guy but when I am at the start of the stage it will be a huge excitement, particularly for the first rally in Canarias because it’s the first high-level challenge for me after the crash.”

What’s your target for this season?

“Definitely I need to learn and that’s why I need to keep in my mind I’m not on the race track, I’m in rallying, I’m on the stage, I have a lot to learn, I’m new to this sport. It will take time I know it but I have to take advantage of this opportunity that I have this season to learn as much as I can.”

Have you marked out any long-term career plans?

“In some way I still hope to come back to where I was, that’s definite. It’s a bit strange because I’m coming from Formula One and suddenly what was all my life stopped in one second. Now I know, I knew it always, but now I appreciate more that there’s nothing better in life than doing what you want to do. I had a great opportunity to be an F1 driver but on the other hand I have a great opportunity to become a rally driver with a very good programme. I can do a good job and provide PRESS RELEASE excitement. Maybe not straight away results but excitement and somehow I can give something back to the people who have supported me.”