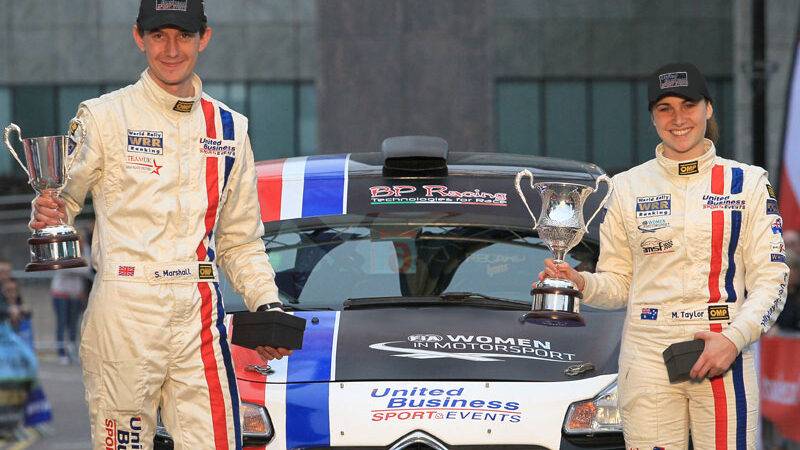 United Business announces Molly Taylor’s programme for the 2013 sports season. As per the “rumours” of the past weeks, the strong Australian lady driver, co-driven by Englishman Seb Marshall will compete in the European Rally Championship. Now the news is confirmed and Molly will effectively begin her adventure in the European Championship driving the Citroen DS3 R3T in two weeks’ time, in Portugal on the island of São Miguel, taking part in the 48th Sata Rallye Acores on April 25th-27th (also broadcast live on TV on Eurosport). She will then start in another seven European events and will also be present in the World Championship, where she will take part in the Rally d’Australia – World Rally Championship – in the WRC 3 class.

As expected, the car for the European Championship events will be supplied by BP Racing, the team which provided the car for the 2012 season to everybody’s satisfaction.

“In recent months we thoroughly analyzed all the opportunities before focusing on this programme – said Pier Liberali of United Business – I have been in constant contact with Molly and with Paolo Butelli of BP Racing, on both sides there was the desire to find the way we work together, it was logical and right to continue with BP Racing after the season achieved in 2012. Thanks to the support of our advertising partners and institutions, we have managed to organize a programme that will allow her to drive a car that she knows well and supplied by a team that has always given us excellent cars”.

“I am very excited to take part in the European Championship – says Molly Taylor – being in Sata Rallye Acores will be a very good experience for me, as well as having the opportunity to compete in the other European Championship. It will be a very interesting challenge, I only know one event, Ypres, having done it last year, but the other races will all be new for me and in places where I have never competed. I am raring to go, with United Business and BP Racing our priority is to be consistently fast in every race which we will take part in and to try, why not, to win the “FIA ERC Ladies’ Trophy”.

With the pre-event test before Sata Rallye Acores, the Australian driver will resume confidence with the Citroen DS3 R3 which she has already driven last year. This test will serve to better prepare the crew for the race which will start on Thursday, April 25th, at 14:30 from the charming Gonçalo Velho square in Ponta Delgada (San Miguel Island – Azores – Portugal).