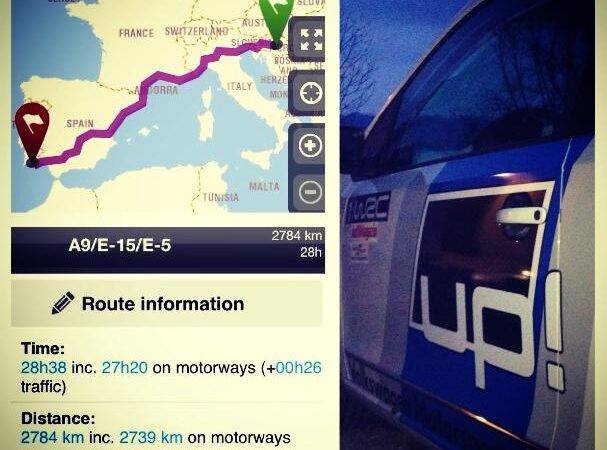 Volkswagen white up!, dressed in proper WRC war colors, is on it’s way to Portugal. Moments ago, two man crew started their journey from Croatian capital Zagreb, towards Portugal, for the round 4 of this years World Rally Championship.

According to the nav system, it’s a healthy 2700+ kilometers in one way. Add to that the return trip, combined with driving to and from special stages, and little Up! will come back with respectable mileage under it’s belt.

Originally, team consisted of three people, but there is a limit on the number of media passes issued per publication, and that number is two. Sorry, Mr. Photographer, WRC and FIA obviously have enough of those.

Rumour has it that FIA president Jean Todt will be talking to Up!’s crew, once they arrive in Portugal, as FIA wants to resurrect the old concept of rallies. You know, starting Rallye Monte Carlo from Paris, and such. Silly joke alert, but you never know, do you. Just look at how green and environmentally friendly Formula 1 is these days – nothing says cost cutting and low pollution like 4 stop races due to the fast degrading tires. But I digress!

So, little Volkswagen white Up! is on it’s way to Portugal! Have a nice journey, guys, and keep the finish line in mind.