Always ready to rise to a fresh challenge, the nine-time world rally champion Sébastien Loeb and Peugeot Sport will contest the Pikes Peak International Hill Climb on June 30. The Frenchman will tackle the world’s highest hill climb – which culminates at an altitude of 4,301 metres – at the wheel of the 208 T16 Pikes Peak which was specially engineered and built by Peugeot Sport. The event marks the French team’s return to the classic American event after its memorable victories there in 1988 and 1989.

The announcement of this ambitious project three weeks ago caused something of a buzz in motorsport circles, and the time has now come for the next phase of this exciting adventure: the unveiling of the machine with which Sébastien Loeb will target victory in Colorado. Although its exterior styling resembles that of the production model, the Peugeot 208 T16 Pikes Peak was tailor engineered and designed to meet the specific needs of the famous American event. No punches have been pulled with the 208 T16 Pikes Peak which will compete in the event’s premier ‘Unlimited’ class, a category that allows plenty of freedom on the technical front. The engineers have naturally taken on-board the salient features of this legendary competition, the USA’s oldest after the Indy 500 and a truly unique cocktail because of its incredibly twisty, high-altitude course.

That said, Peugeot can count on the considerable experience it gained of the so-called ‘Race to the Clouds’ with the 405 T16 which claimed back-to-back victories in 1988 and 1989, in the hands of Ari Vatanen and Robby Unser respectively. Sébastien Loeb counts among those who were struck by the film ‘Climb Dance’ which was produced to commemorate Vatanen’s resounding success. Now that he has taken a step back from world class rallying after dominating the World Rally Championship for almost a decade, Sébastien Loeb is keen to turn his attention to new challenges. In addition to his involvement in this year’s GT World Series, he snapped up the opportunity to contest the celebrated Pikes Peak Hill Climb and discover its 156 corners which he will tackle without the help of a co-driver. The Frenchman will also have to cope with a strength-sapping altitude difference of some 1,500 metres in less than 20 kilometres, with the finish line situated at an altitude of 4,301 metres!

Aggressive, racy, ferocious even… These are some of the adjectives that describe the awesome Peugeot 208 T16 Pikes Peak which is poised to take up the challenge of the world’s highest motorsport event on June 30! The car which Sébastien Loeb will drive in Colorado boasts a highly distinctive design: “Its proportions are very different to those of the production 208,” observes Michael Trouvé who is in charge of silhouette design at Peugeot’s Styling Centre. “This difference gives it an almost beast-like appearance. Peugeot Sport provided us with a number of technical constraints, such as the width, body height, location of the wheels and engine, and we worked to this brief to produce an extreme take on the 208.” 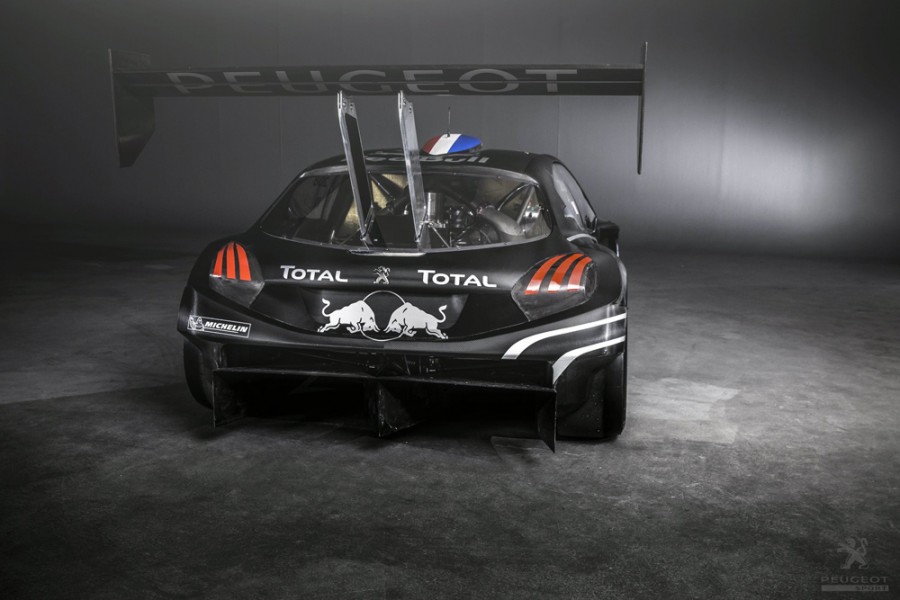 The work of Michael Trouvé and his colleague Attila Bocsi has resulted in a car with a unique stance. “The cars which represent the brand in motorsport have always tended to feature sculpted forms which combine style and aerodynamic efficiency. The 208 T16 Pikes Peak is no exception, and it incorporates all the distinctive hallmarks of the 208 which itself marks a new generation of Peugeot design,” says Michael. “I am very proud to have played a part in this adventure, especially since we didn’t have much time to work on the car’s design, because the green light was only given in November and the project wasn’t signed-off until February.” The car’s aerodynamics naturally haven’t been sacrificed in the name of style. Based just a few kilometres from Peugeot Sport, the team of stylists was able follow the different build phases: “The rear wing, which is that of the Le Mans 24 Hours-winning 908, and the splitter are two features of the car which give it its beast-like attitude. And I am amazed by the beauty of the parts concealed by the carbon bodywork!” All that remains now is to discover the performance potential 208 T16 Pikes Peak and its final livery. Be patient, all will soon be revealed!

The discovery of a gold seam in the middle of the Colorado Mountains in July 1858 sparked off the arrival in the Pikes Peak region of some 100,000 fortune-hunters looking to fulfil their dreams. Numerous disillusionments later, the mountain has since recovered its former tranquillity and is today a designated National Historic Landmark. Yet the peace of Pikes Peak is broken once a year by an invasion every bit as boisterous as the infamous Gold Rush. When a trail to the summit was completed in 1916, a new generation of adventurers flocked to the site looking for a different type of glory, and today more than 150 drivers get behind the wheel in a host of sometimes implausible vehicles to take on the Pikes Peak International Hill Climb, the world’s highest competition of its sort and America’s oldest motorsport fixture apart from the Indy 500. The principle behind the so-called ‘Race to the Clouds’ is simple and involves each competitor taking turns to drive the 20km course that twists its way along the mountain’s flanks to reach its summit at 4,301 metres in the shortest time possible!

The start line is located at an altitude of 2,800 metres, which means that competitors face an altitude difference of some 1,500 metres. Meanwhile, the lack of oxygen is a challenge not only for the engines – which can lose up to 30 per cent of their power – but also for the drivers who must remained fully focused on the 156 cliff-lined corners… It is an exercise which calls for dexterity and meticulous preparation, as well as a little luck! Over the years, the dirt trail has been gradually paved and the 2012 event was the first to take place entirely on asphalt. Unsurprisingly, last year’s competition produced a new outright record for the course when Rhys Millen (Hyundai Genesis Coupé) produced a 9m 46.164s, half the time required for the first ascension in 1916! The entry is broken down into more than 20 classes covering vehicles as varied as cars, bikes, sidecars and trucks. The premier category is the ‘Unlimited’ class in which Sébastien Loeb’s Peugeot 208 T16 Pikes Peak will compete. A number of official test sessions are organised to enable competitors to familiarise themselves with the course, but only one section at a time. The only opportunity they get to tackle the route in one go is when they do it for real on the day!