With one horsepower per kilogram, Peugeot 208 T16 sounds like a proper thing to use on high altitude hillclimb track such as Pikes Peak. This particular race was always about purposely built cars – in the past they not only had to deal with high altitude, but with gravel surface. Today, gravel is gone, but the challenge is still almost the same. Speeds are higher, and the huge drops are still here, ready to punish the reckless ones.

Today, Peugeot Sport finally released all the technical details about the car. As you might expect, this 208 is only 208 by name – it’s body, chasis, suspension and engine are made with just one goal – to be fast in the hands of nine times world rally champion, Sebastien Loeb.

Engine of this beast of a car comes from endurance racing – V6 bi-turbo throws 875 horsepower to all four wheels, propelling the light weight chasis to stunning speeds. Much of this power will be diminished by the thinner air at Pikes Peak high altitudes, but let’s not kid ourselves. Even if you shave off 30%, you’re still left with plenty under the right foot.

208 T16 PIKES PEAK : Reaching for the clouds with one horsepower per kilogram!

Peugeot Sport has pulled no punches in its bid to provide Sébastien Loeb with a singularly awesome machine for the 2013 Pike Peak Hill Climb (June 30). The 208 T16 Pikes Peak in which the driver who has dominated world class rallying for the past decade will attempt to become the ‘King of The Peak’ boasts a power output of 875 horsepower, tips the scales at just 875kg, and benefits from all-wheel drive, plus a spectacular aerodynamic package.

The mission of any race car designer is to juggle with the restrictions and constraints dictated by the regulations in areas like height, the forms of the body, the size and location of the powerplant, etc. It’s a stimulating challenge, of course, yet it can also be highly frustrating at times. Deep down, engineers have just one desire, to sweep the table clear of the rule books and design the ultimate, no-holds-barred machine with just one objective in mind: the quest for absolute performance. 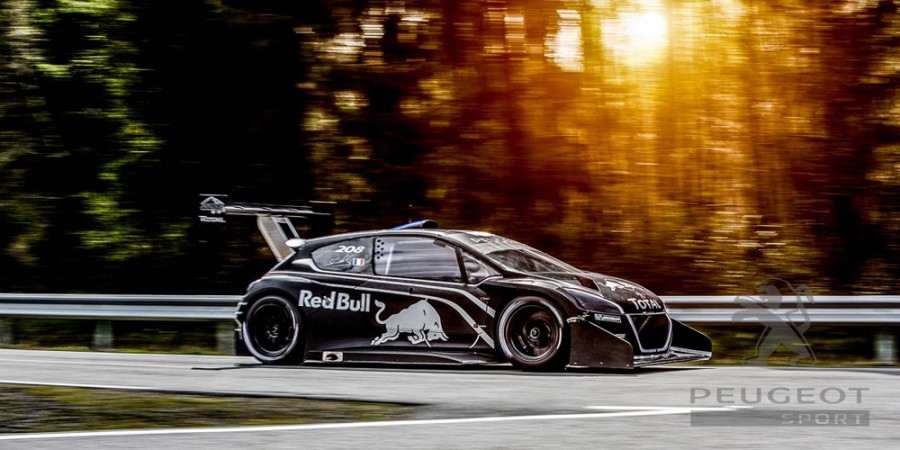 The Pikes Peak Hill Climb is the only race in the world that permits the fantasy of freeing the beast that lurks at the back of every engineer’s mind to become reality! The very mention of the event and its celebrated ‘Unlimited’ class is enough to bring a twinkle to the eyes of any designer.

[quote]“Your imagination is the only limit when you set out to design a car for Pikes Peak, ” grins Jean-Christophe Pallier, the Peugeot Sport engineer tasked with the 208 T16 Pikes Peak project. “Designing this car was a tremendously rewarding experience, even though we still had to take the ‘time’ factor into account…”[/quote] 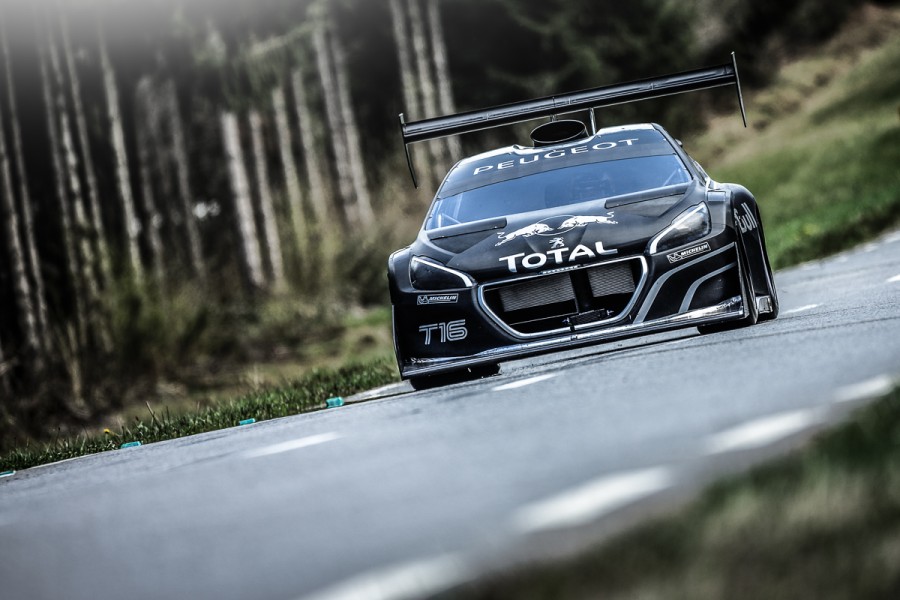 The giddy altitudes visited by the Colorado hill climb present a unique technical challenge: that of ensuring the engines are able to breathe as freely as possible in the rarefied air… “In the case of a normally-aspirated engine, you basically lose one percent of the available power every 100 metres you climb, ” notes Peugeot Sport Director Bruno Famin. This is a fundamental parameter that has to be taken into account for this race which starts at an altitude of 2, 865 metres and finishes at 4, 301 metres! By the time they reach the start line, certain engines automatically shed some 30 percent of their potential. A powerful engine is consequently essential because there can be no question of Sébastien Loeb lacking power on the day.

Peugeot Sport’s answer is a derivative of the bi-turbo V6 which was designed for endurance racing. With this 875-horsepower powerplant under the bonnet, the 208 T16 Pikes Peak will boast even more power than a Formula 1 single-seater! It goes without saying that it will be the most powerful car ever driven by world rallying’s multiple champion. This will be motorsport in the extreme, especially since the guard rails that are a hallmark of traditional circuits make way for steep drops in the case of the Pikes Peak Hill Climb… 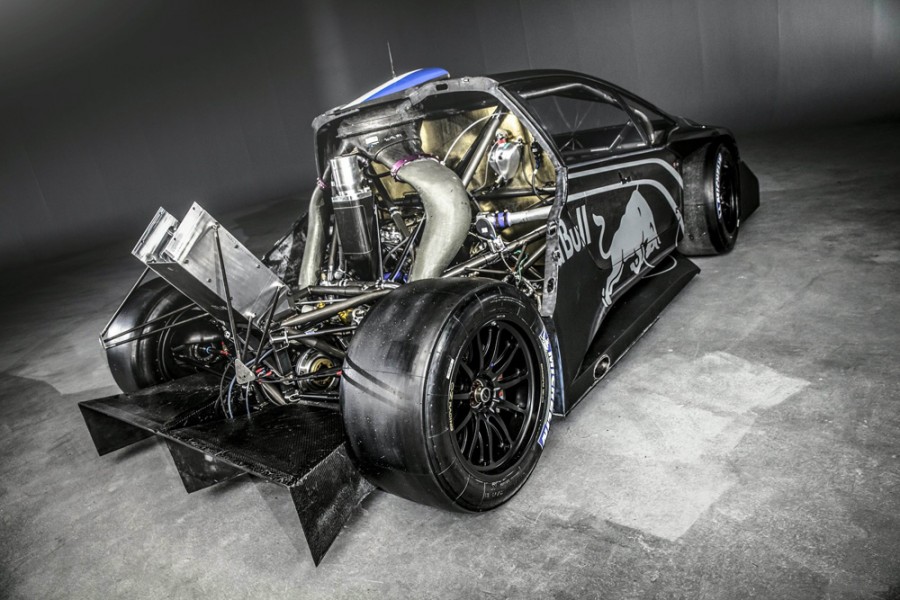 In its bid to reach out to the clouds, Peugeot Sport has also paid careful attention to providing Sébastien Loeb with a particularly lightweight car. “We’ve shaved it down to 875kg, ” observes Jean-Christophe Pallier. “As a result, we have achieved the magic and symbolic power-to-weight ratio of 1:1!” Meanwhile, to be sure that the car’s handling is as agile as possible, the weight distribution of the tubular-framed machine has been meticulously fine-tuned, with the engine sitting in a mid-rear position, like the famous Group B rally cars of the 1980s and like endurance racing prototypes.

The 208 T16 Pikes Peak effectively shares its genes with those of the Le Mans 24 Hours-winning 908 in several areas. Indeed, last year’s Pikes Peak took place for the first time on an entirely asphalted course, so the machine conceived by Peugeot Sport is practically an out-and-out endurance racing prototype. Common areas include the running gear, brakes and aerodynamic features like the air-intake and the spectacular two-metre wide rear wing which was originally used for the first-generation 908 HDi FAP. Unfortunately, there weren’t any wider options in stock!

Also like that of a Le Mans car, the 208’s aerodynamic package has been meticulously honed. “We believe efficient aerodynamics can give us a competitive edge over our rivals, ” notes Jean-Christophe Pallier. “The speeds reached during the ascension range from 50 to 240kph, and aerodynamics play a key role from 100kph.” The 208 T16 Pikes Peak’s hallmark rear wing and front splitter are not only extremely spectacular, but they are also awesomely efficient, in addition to bestowing the car with a truly beast-like stance. Meanwhile, although invisible, the design of the car’s under-tray is responsible for generating almost half the car’s downforce…

Last but by no means least, the Peugeot 208 T16 Pikes Peak sits on bespoke Michelin tyres which provide the four driven wheels with invaluable grip. To tackle the 156 turns that stand between Sébastien Loeb and the Colorado clouds, the most successful driver in rallying history will most definitely benefit from one of the most potent purpose-engineered cars ever designed for motorsport!