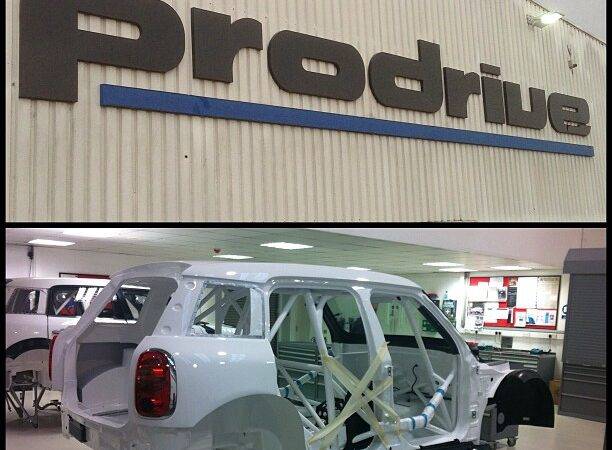 And not just any rallycross, but Global Rallycross Championship and X Games – the leading British rallycross driver Liam Doran will have the honour of driving it. Doran was able to sample Mini’s WRC machine in test sessions, and he also visited Prodrive’s factory – one would assume he is very much involved in the project. The car itself will be prepared in several phases, and is based on existing WRC machine, also built by Prodrive.

Details on each phase are described below, but as expected, Prodrive will strip the car of all excessive weight, while also boosting engine power by approx. 40-ish percent. Special attention will be given to the specifics of rallycross racing, so sensitive components, such as radiator, will be moved to less exposed areas of the car. Because, rallycross = you use the front of your car often, to move annoying obstacles out of your way!

Detailed description of what Prodrive is building and why, follows below.

Doran’s first outing with the Monster-backed MINI RX will be at the X Games in Barcelona on May 18/19, followed by Munich in June, before the team heads to the USA for the Global Rallycross Championship and the Los Angeles X Games. In 2011, Doran secured a gold medal in XGames 17 beating former World Rally Champion, Marcus Gronholm.

The MINI RX is closely based on the MINI John Cooper Works World Rally Car, but is being modified to make it competitive for Rallycross.

In the first phase of development, the car’s 1.6 litre turbo engine will be remapped to run with the regulation 45mm restrictor (33mm on the WRC). This, combined with a larger intercooler and extra turbo boost, will increase power by 20 per cent without any mechanical changes to the engine. A second development phase will bring a further 15-20 per cent increase in power.

As the MINI RX will run with a 1600cc engine, it will benefit from a 90 kg weight advantage over the two litre cars. This means the car’s minimum weight with driver is 1,210 kg compared to around 1,350 kg for the MINI WRC with its two drivers. As a result, the MINI is being stripped of all the equipment and ancillaries required for rallying, such as the co-driver’s seat and instrumentation, tools, spare wheel, heater and protective undertrays. Lightweight bodywork is also allowed in Rallycross and Prodrive will introduce carbon fibre panels in phase two of the car’s development.

The last major modification is to move the radiator to the inside rear of the car, as it is susceptible to damage at the front, with ventilation panels built into the rear doors.

“Having run the MINI non-competitively at the recent British Rallycross event at Lydden Hill at the new weight but with the WRC engine, we know it is already not that far off the pace of the Rallycross entries,” said Paul Eastman, Prodrive’s head of rally engineering. “With the initial extra power it should be a match for the two litre cars on the short stadium tracks for the X Games in Barcelona and Munich and then there is more to come in time for the longer US events.”

The MINI’s strength is in its chassis and the fact it is the only Rallycross car to be evolved from a fully-engineered WRC.

“We are building a Rallycross car from the base of a meticulously engineered and refined World Rally Car, proven on every surface in the World Rally Championship. Since 95 per cent is the same, we already have in place a comprehensive parts package and distribution system,” said Eastman.

Doran will drive the MINI RX for the first time at Prodrive’s test track in Warwickshire in early May. Doran said: “When I drove the MINI WRC at Lydden you could immediately feel how good the chassis was, and while clearly it didn’t have the power I am used to, you could see that with some engine mods it would make a great Rallycross car. It will be great to be the first person to drive a properly works-engineered MINI RX and I think as such an iconic global brand, it will very quickly become a favourite of the fans on both sides on the Atlantic.”