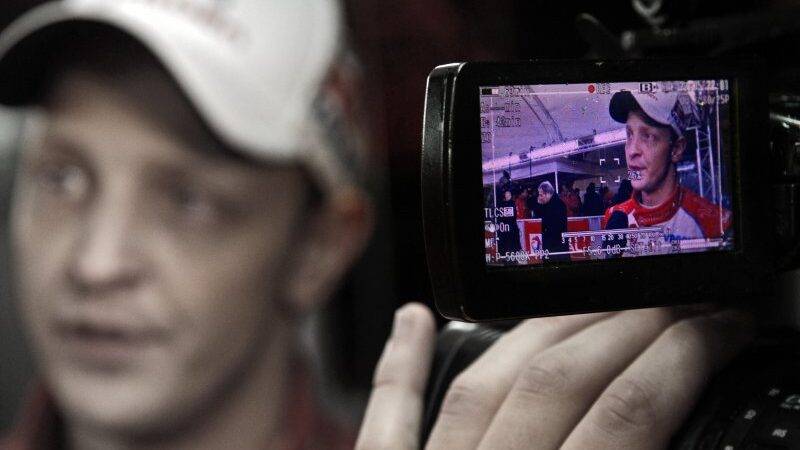 The echo of that horrible, horrible idea of turning power stage into all-important shootout is still pretty loud, but things seem to be settling down once again. Bomb dropped, shrapnels were everywhere, calm people spoke calmly, nervous people raged, and the ones in the bomber… laughed? Well, can’t say for certain, but they are pretty silent at the moment. Again.

But, let’s not just run around screaming and raging (which is what I did, I admit) – how about an actual idea. Granted, it’s not a perfect live TV stage, but it could be a step forward. I think, at least.

This idea is not a new one, nor it’s very original really. It’s also very simple, yet could become next big thing in bringing the sport closer to it’s fans.

We already have radio crews at the end of each special stage, and their work is amazing, to say the least. Sometimes George Donaldson has a stuck throttle problem – there’s no stopping him when he grabs one of the many interesting topics in and around WRC and rallying, both modern and past. Colin Clark sometimes goes into those “let me give you a heart attack for breakfast” bursts, so you expect him to declare that alien delegation just landed next to the stop line, only to realize he noticed someone’s bumper being damaged. And of course, it always happens exactly when your favourite driver is expected to arrive to the finish! But it’s the thrill of being there, seeing the things first hand and doing it while high on passion and excitement that keeps them talking, discussing, screaming and shouting. To us, fans all over the world, it’s the closest we can hope to get without actually being able to travel to the stages ourselves.

Now, imagine radio broadcast complemented with live video stream! It can literally be one guy holding a camera on each stage end. It can also be camera strapped to existing radio reporters – they already look like TV towers, so why not put more things on them. But seriously, how outrageously expensive and technically challenging it would be to add video stream to WRC.com, one stage at a time? When stage ends, or rather, when WRC live radio coverage switches from one stage to another, video stream also switches from camera on stage A to camera on stage B. I understand video stream would require more bandwidth to send actual video data out, and that this is only one part of the challenge, but is it really that difficult? Harder than live filming a guy jumping out of a balloon thing, in space?

It may sound like one camera is not that much, and especially if it shows none of the action. But it’s a step, a small one, but a step anyway. To be able to see AND hear Sebastien Ogier complaining about Dani Sordo’s limping car, it would definitely add another layer of excitement.

And perhaps, just perhaps, in the background of the frame, there could be a wall with sponsor names. You know, companies pay money to have their names visible in live video stream. Surely that would make promoters happy, even if only to cover the costs of this new feature? I am thinking very simple here, but really, perhaps simple is the new complex.

Would it be possible?