Re-living the Spirit of the Group B, in a Porsche

It is hard to imagine that it has been over 33 years since a Porsche was on a highest step of the WRC podium. It was Jean-Luc Thérier who did the honours on the 1980 Tour de Corse in a 911 SC. Porsche did their share of victories far from it, they won over 23.000 titles in all racing car categories, and a good part of that was in rallying. They were a force to reckon with in the ’60s and ’70s. Three double wins in a row in Monte Carlo ’68, ’69 and ’70 with names like Toivonen, Elford, Larrousse and Waldegard, first place in Finland 1973 tell the story of a reliable and fast Elfers. 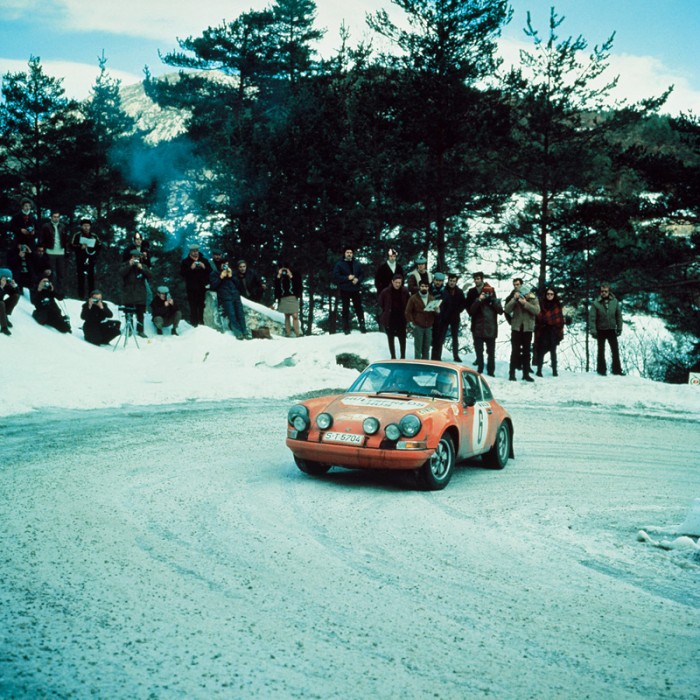 They decided to withdraw from the WRC and concentrate on Le Mans. And as the golden era of the group B was heating up, they developed arguably the fastest car a WRC driver could dream about – the 959 group B. But instead of charging in against the Lancias and Peugeots, they decided to go on the Paris Dakar Rally – which they won – twice. The second time they took the victory, 1986, the group B had been caned from the WRC. Porsche never really turned to rallying ever again, and I personally think that is a big loss. But if they didn’t, what kind of history would that produce? And what kind of cars would we have today? 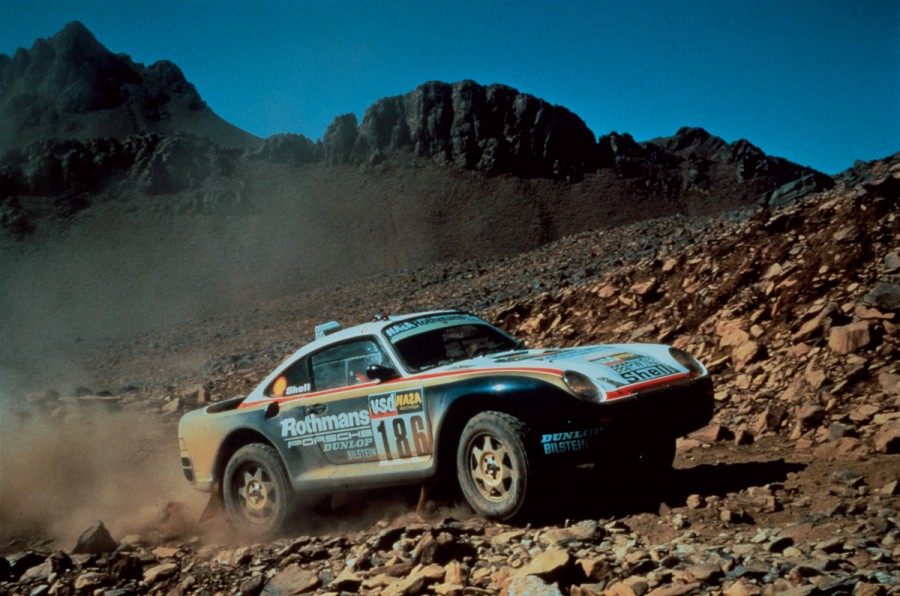 Now, the pinnacle of today’s rallying are 1.6 turbo 4×4 cars. Porsche doesn’t have 1.6 turbo engine. And probably won’t in quite some time in the future. But what they do have is a car that I believe would be the civil version group B, had one continued. It is the Porsche Turbo S. 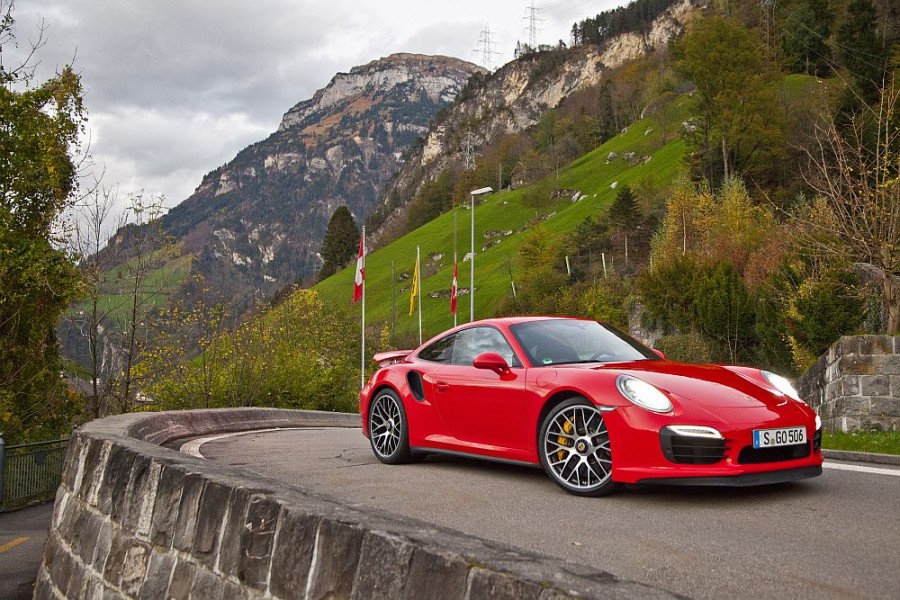 Reflecting on the 40 years of the 911 Turbo era, one of the best photographers in Europe, Vladimir Bace and I went on a road trip trough the passes in Switzerland. Among others we had one of them in mind in particular. It is the Klausen Pass near Zurich. In the ’20s and ’30s this was THE hillclimb race to watch. 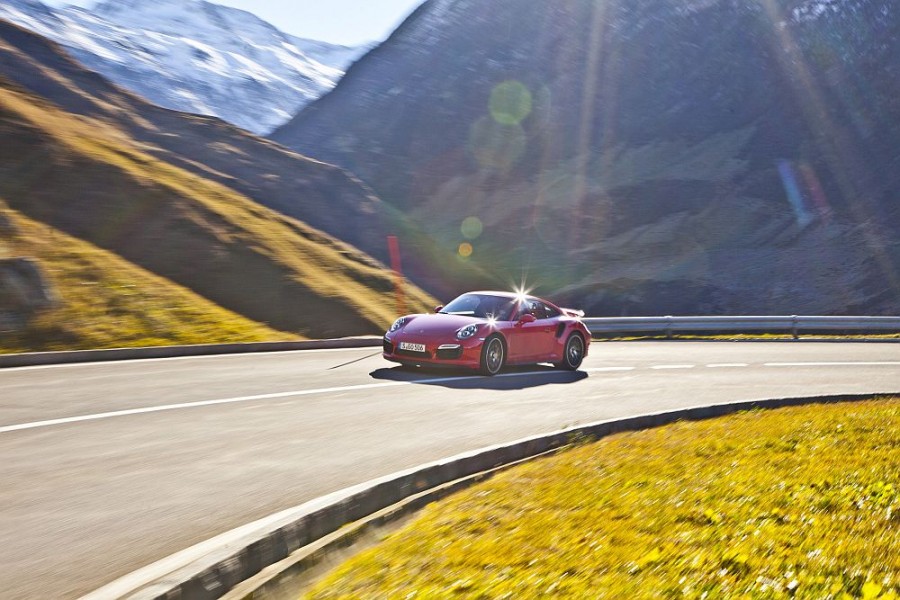 It featured Hans Stuck and Rudolf Caracciola in their fight for glory. Switzerland banned car racing after World War 2, and introduced them back in 2007. This would make an epic super special and a great tribute to motorsport if Switzerland was to host an WRC event here. 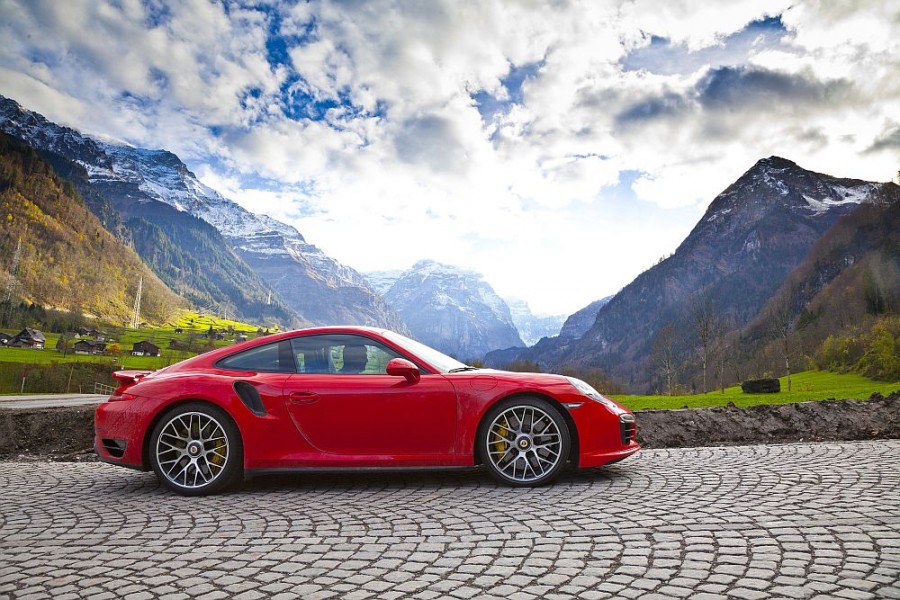 Sitting by the side of the road I watched the Turbo S on the stone paved start of the Klausen Pass. Couldn’t help to think that this here production car could easily outclass any of the early era group B cars. Gargling on idle was the 3,8 liter flat six twin turbo that punches out 560 HP trough dual clutch seven speed PDK and grasps it’s way to 100 km/h trough all four wheels in 3,11 seconds. It has torque vectoring that sends power to any wheel with the most grip. It has four wheel steering also. It even has active aerodynamics that pushes out the front splitter and rises the rear spoiler on high speeds. Even on 20′ standard road Pirellis the 410 mm carbon ceramic disks in the front make your eyes beg to stay in their sockets as you brake late into the hairpin. And yet it looks so composed sitting here like just another GT car. 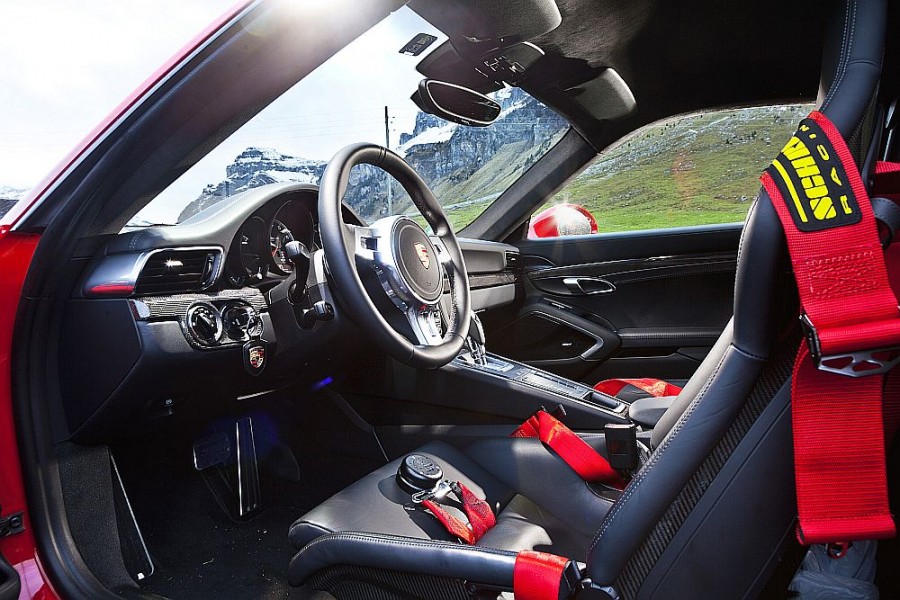 This one had carbon bucket seats, racing harnes and a roll cage. So it was only appropriate to strap myself in , tighten the shoulder belts and go for a tribute hillclimb. Hard to imagine how brutal were the group B cars to the drivers, but I can get a fair idea after first few k’s in the Turbo S. The grip is mind bugging, and the corners come so fast that I am constantly trying to kick start my brain and speed it up to cope with the car. 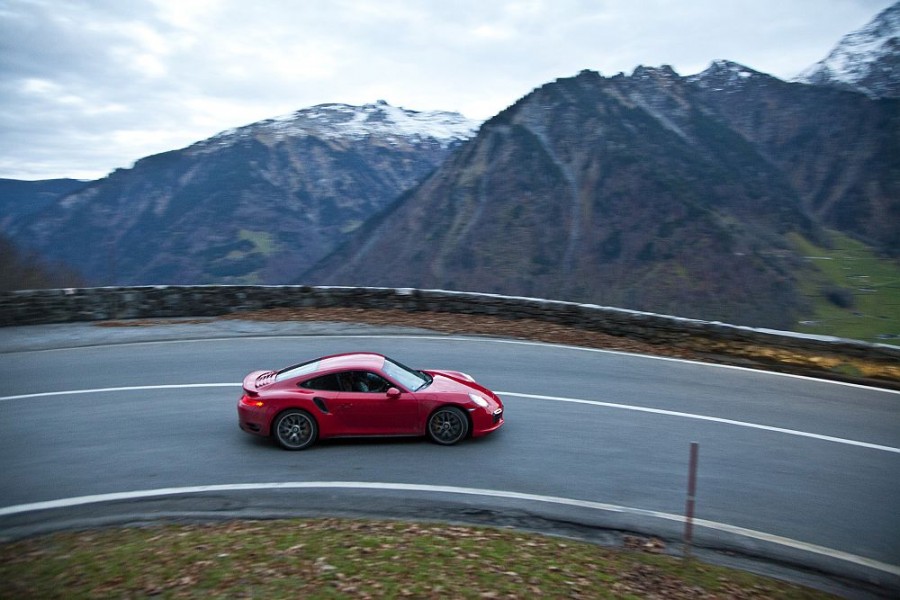 It goes trough first two gears like it wants to catch third as soon as it can, and when it does, it just fires itself from one corner to another. It does so in a way that no mater how prepared you are and how strong your neck is, your head keeps tilting on braking and acceleration that you pray for a Hans device. 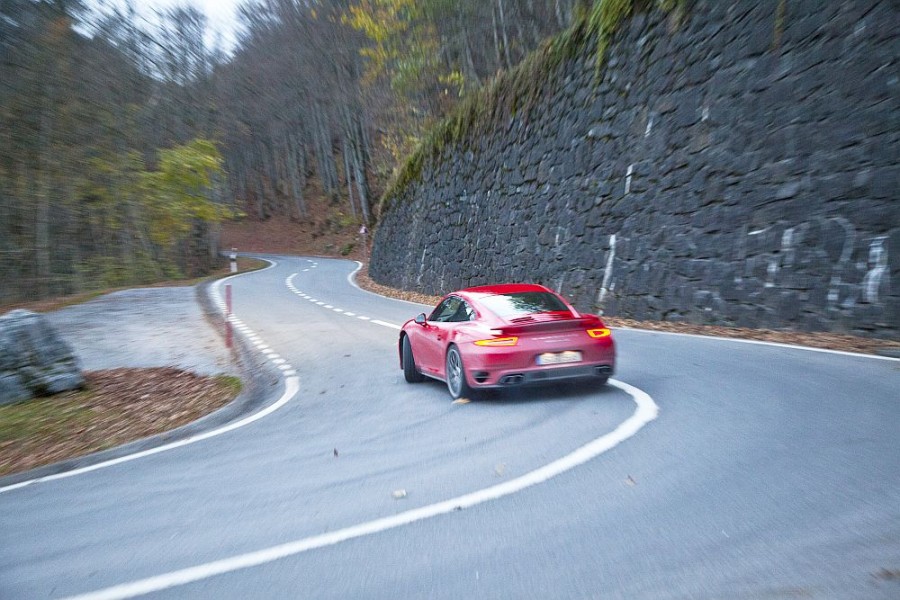 Enter a corner moderately, punch the gas pedal one third of the way trough the bend – it swings the but out just a bit and catapults you any way your steering wheel is facing. Yet, it is not as digital as a GTR nor is it planted on all four wheels like a sumo wrestler, you can still play with the balance and feel the road trough the steering wheel. 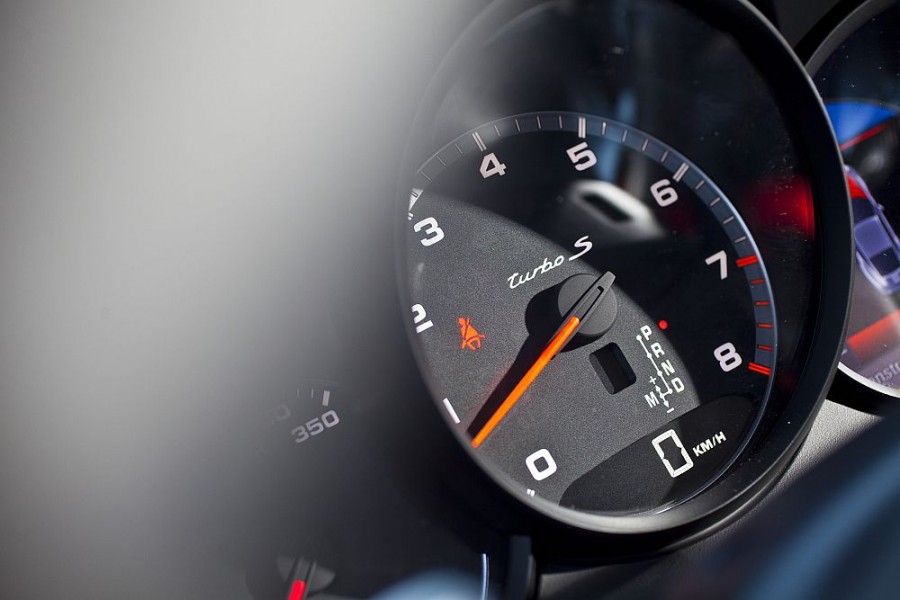 This is by far the best electric servo I have driven. And as far as the PDK, it is a definite must in a car like this. One would only be slower and distracted by a third pedal on the floor – it would maybe make you enjoy more involvement but I wouldn’t take my hand of the steering wheel lightly with ESP off (and I do like to do skids). 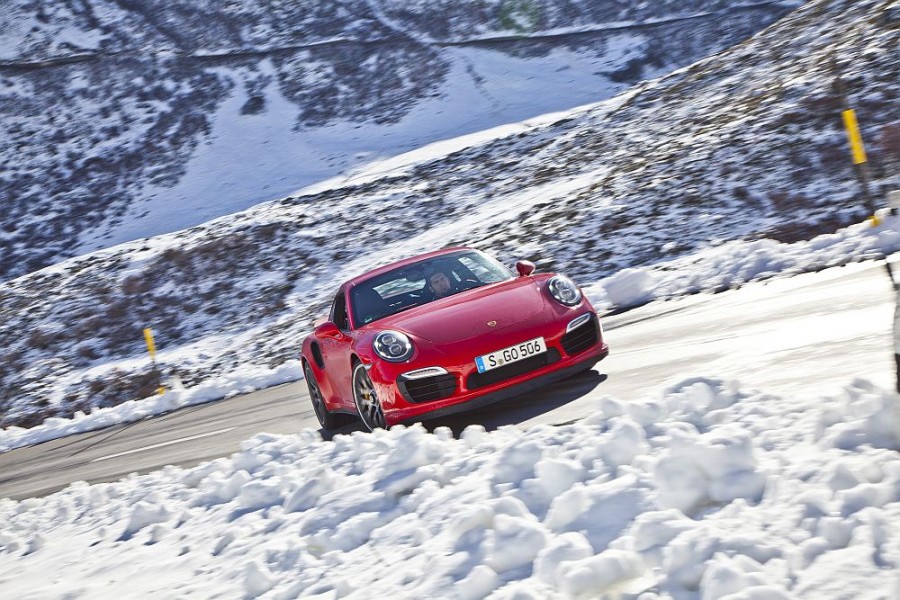 That same brutal car took us back to Zuffenhausen on a stretch of autobahn doing 120 km/h with consumption as low as a family sedan (9,8 l/100 km, or 24mpg) , and comfortable as a true GT. Group B cars won’t come back, but it is nice to know the spirit still lives. Take five minutes and imagine how WRC service area would look like with names like: Lancia, Peugeot, Porsche, Ford, Mazda… Imagine Alfa 4C with a Ferrari 4,5 V8, or a light weight Nissan GTR – screaming on the Ouninpohja…  Scary isn’t it? But you want it!