Citroën’s presentation was bad, but what if they just used up all bad for 2014? 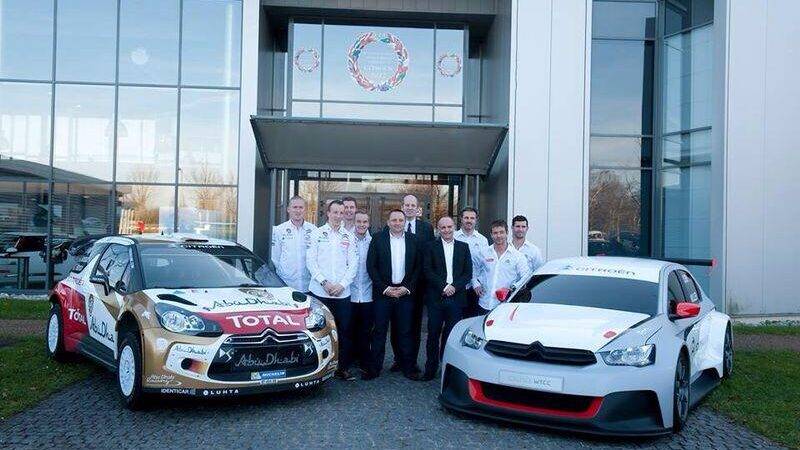 The presentation itself was a flop. At least the live streaming part of it. The original sound was a bit iffy but when the voice of the event’s host, speaking in French, got mixed up with the voice of a simultaneous English translation, I had me a bit of a confusion. Two languages collided and mingled in so many ways, none of which was understandable. At some point things improved a bit, but in the end, it was a big mess of words and phrases and, I’m quite sure some very interesting information, literally lost in translation. Bad way to present your very elaborate and ambitious programme, unless it wasn’t elaborate and ambitious at all. And why the French language? With “W” standing for World in both WRC and WTCC, and with Citroën selling cars not only in France, you’d think they would go with the English language. I do understand the brand and its roots, I understand the venue and the occassion, I understand the desire to make sure Citroën and its products are first and foremost perceived as French (and then awesome close behind), but guys, this did not work. At all. Never, ever do that again. Even if their English sounds like the English used by some other non-native speakers from some other teams and companies, and you can sometimes maybe catch every fifth word, don’t go with French over English. Unless there are two separate streams. We really want to hear what you are saying and we’re genuinely interested in your presentation, don’t force us to miss it.

Perhaps it can be explained with the supposedly smaller budget for the whole motorsports thing in Citroën, but I don’t really see three WRC and four WTCC cars as a savings measure. But hey, everyone makes mistakes and in all honesty, once the thing starts, there’s not much else you can do but carry on. They slipped, but if that’s the worst thing they do for the next year or so, I’m sure they do not mind. And what a year it will be for Citroën Racing. Two to three cars in the WRC and two turned three sometimes even four cars in the WTCC. To say they’re ambitious is not quite there. More likely they’re a bit crazy and pretty courageous to embark on such a mission, because no matter what they do and how they fare, it’s their name on those cars. Unlike Ford, who cleverly hid behind Qatar and M-Sport, Citroën did not embrace that concept.

Kris Meeke and Mads Ostberg. The Irish guy is pissed beyond belief because of all the missed opportunities and disappointments of the past, from the Mini-BMW flop to the more recent crashes in the very few selected WRC outings. He’ll be craving for a result next year. Hopefully he will also crave for finishes too, but I’m confident Kris knows when it’s time to lift. Mads Ostberg had a rough season this year, things never really clicked for him this way or the other. New team and a new opportunity. Can he make the most out of it? You can only remain hopeful and a upcoming guy for so long, Mads has some points to prove (and score) next year. With these two on board and with the experience and the capable cars, this team will be at the top, I haz no doubts about that. And that’s the top of the standings, no their cars roofs.

WTCC programme is irrelevant for this site so I’m skipping that completely. They would want us to believe that the WTCC car is a rally car too, because Sebastien Loeb, but this is not Autosport you’re reading at the moment, we know rally cars from PR stunts. With this immensely self-empowering conclusion I invite you to get the rest of the information presented today in France in the official PR thingy. Officially official.

From Monte-Carlo to Macao: Citroën Racing to fight on all fronts!

Citroën Racing presented details of its 2014 sporting programmes today at its technical centre in Versailles. For the first time ever, Citroën will be competing simultaneously in two FIA World Championships, with Rally Cars (WRC) and Touring Cars (WTCC). This commitment to motorsport is also reflected in the products of the Brand, which has today unveiled a limited edition DS3 Cabrio Racing.

From the kick-off of the WRC on 14 January at Monte-Carlo to the chequered flag at the final race of the WTCC on 16 November at Macao, Citroën Racing is about to experience 306 intense days of competition, with two World Championship and a total of 25 races!

“We are embarking on a challenge that is not just sporting, but also technical and logistical. The entire team has been very enthusiastic and creative in preparing for the coming season as effectively as possible,” confirmed Yves Matton, Citroën Racing Team Principal. “We are very fortunate to be able to take on this double programme. Despite the difficult economic conditions facing the automotive industry, the trust placed in us by the senior management of PSA and the support of our partners have enabled us to implement our plans successfully. We are going to reach more countries, in all four corners of the planet, and we are going to have so many more opportunities to promote Citroën and showcase its Créative Technologie.”

“We are not starting from scratch in either championship. Our experience in rallying and the FIA’s desire for regulatory stability mean we can approach the WRC side of things in a relatively relaxed frame of mind. We have opted for the crews Kris Meeke/Paul Nagle and Mads Østberg/Jonas Andersson to represent us in the Citroën Total Abu Dhabi World Rally Team. Our aim is to support their progress so that they are able to challenge for victory at certain events. Khalid Al Qassimi/Chris Patterson will also be competing in a few rounds of the WRC, but their main objective will be the Middle East Rally Championship.”

“The challenge awaiting us in the WTCC is also very motivating, but we need to learn about everything in this discipline. We feel that we have worked well on the Citroën C-Elysée WTCC, even though we have no real basis for comparison given that the regulations are new for all of the competitors. Yvan Muller’s assessment, who believes the car has been well designed, has reassured us in terms of the direction we have taken. We can’t wait to go up against our rivals on track to get confirmation! Alongside Yvan and Sébastien Loeb, we are delighted to confirm our third driver, José-Maria López.”

With 93 wins and eight Manufacturers’ World Championship titles, Citroën Racing has the best competitive record among the teams currently competing in the WRC. This impressive heritage continues with Citroën Total Abu Dhabi World Rally Team’s entry in the championship in 2014.

First seen in 2011, when the new regulations were introduced, the Citroën DS3 WRC will be contesting its fourth racing season. After winning three rallies this year in Monte-Carlo, Argentina and Germany, the DS3 WRC remains very quick on all road surfaces, even when up against more recent models.

The big changes for 2014 concern the teams nominated to score points towards the Manufacturers’ World Championship standings. Having competed in a DS3 WRC on two occasions last year, Kris Meeke prepares to tackle his first full season in the World Championship. The 34 year-old Northern Irishman has been part of the Citroën Racing family for a long time, since he competed in the 2005 and 2006 J-WRC in a C2 Super 1600. IRC Champion in 2009, Kris has only taken part in around ten rounds of the WRC in World Rally Cars, but he is extremely motivated to make the most of this opportunity.

A WRC regular since he was 19, Mads Østberg is actually more experienced than his new team-mate. The 26 year-old Norwegian has already competed in 65 rallies, including six podium-finishes and one win (Portugal 2012). For his fourth full season, Mads has opted to challenge himself by joining a team that in the past he has often tried to beat! A naturally aggressive driver, Mads Østberg is counting on combining his turn of speed with Citroën Racing’s expertise as he goes in search of that winning feeling again.

Competing predominantly in the Middle East Rally Championship in a Citroën DS3 RRC, Khalid Al Qassimi will also be taking part in a selection of WRC events. The Abu Dhabi driver will line up in Sweden, Portugal, Italy and Spain.

Yves Matton, Citroën Racing Team Principal: “Thanks to the support of our partners, especially Total and Abu Dhabi Racing, we are pleased to be able to continue Citroën Racing’s involvement in WRC. The team has the expertise and experience that will help our crews to establish themselves among the leading drivers in the Championship. Kris and Mads both have quite a bit to learn, in different areas. Our aim is to help them reach a level where they will be able to make a real impact and win rallies.”

At the next level up, the Citroën Top Driver series runs at six rounds of the WRC3. In their DS3 R3s, the best talented young drivers attempt to win the chance to compete in the WRC2 in a Citroën DS3 R5 the following season.