Everything is affordable and cost-effective these days, even when and if it’s not. Similar to how your car is so green that it almost runs on thin air, but you still need to shell out piles of cash at the petrol station. But what if there are things and projects and deals that are, well, cost-effective, as much as they realistically can be. Not long ago we’ve heard (almost) all about Junior World Rally Championship switching to Citroën power for this year and the next. Of course, this series is all about being cost-effective, but there was no mention of the exact figures (unless I missed it). Rumours started and numbers appeared, showing that this series might not exactly be the most cost-effective rallying series ever. With regards to that, we could use some officially sourced numbers.

As we know, only stupid people, dreamers and hippies believe in things like affordable motor sports. Crash the car or break something and it’s no longer affordable, unless your Daddy is financing it. There will never be a truly, fully, universally cost-effective and affordable entry into motor sports, the one which will enable the poorest of the poor (financially!) talents to give it a go. But some ideas and projects are trying hard to provide the tools and structure to reduce the costs and encourage fierce competition. And that is exactly what the new Drive DMACK Fiesta Cup is all about.

What is Drive DMACK Fiesta Cup? Read on, and if you’re about to embark on the new levels in your rallying career, this project has plenty of punch in store. Oh, and also the WRC 2 drive in a Fiesta R5 should you be skilled enough and win the thing. Go on, read about it. 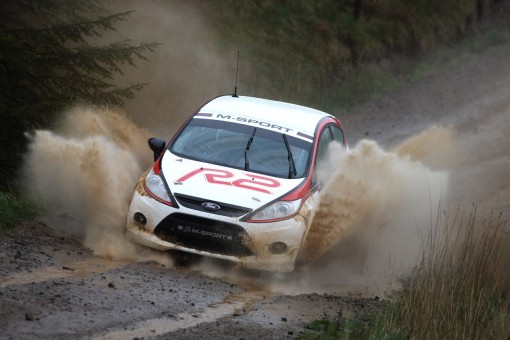 DMACK and M-Sport have joined forces to provide a cost-effective series within the 2014 FIA World Rally Championship which offers an incredible prize drive of a full WRC 2 season in a Ford Fiesta R5 car in 2015.

Registered competitors will be supplied with identical Fiesta R2s prepared and maintained by M-Sport. With the series set to cost a fixed fee of just £99,950, it will be the most affordable way for aspiring drivers to showcase their talent on the world stage.

The cup format, which has been specifically designed to be accessible and cost-effective, will kick into action at Rally Portugal in April. Two more gravel rounds will be tackled at Poland and Finland before two asphalt events at Germany and France.

M-Sport’s well-proven Fiesta one-make championship has enjoyed success over the years. The format ran as the FIA WRC Academy in 2011 and 2012 before switching to the FIA Junior WRC Championship in 2013. The 2012 Academy winner, Welshman Elfyn Evans, used the series to gain experience and demonstrate his speed at world level before progressing to WRC 2 and now onto a full campaign as works driver for M-Sport.

This season the identical cars and control DMACK tyres will generate intense competition as drivers battle to win the biggest prize in world rallying. The Fiesta R5, equipped with DMACK tyres, won on its world rally debut at Rally Finland this year and DMACK have already confirmed plans to run a two-car Drive DMACK team with Ott Tanak and Jari Ketomaa to challenge for victory in this year’s WRC 2 series.

Competitors should contact M-Sport’s Andrew Wheatley on [email protected] for further details on the Cup.

“M-Sport has long been involved in discovering new talent, and this new venture with DMACK means that we can continue that tradition. The Drive DMACK Fiesta Cup offers a cost-effective way for the world’s most talented youngsters to break onto the world stage and the prize on offer means that we could see some very hard-fought competition throughout the year. Needless to say, I am thoroughly looking forward to seeing what talent emerges.”

“From the start, DMACK has always focused on stimulating cost-effective competition by providing an affordable range of performance motorsport tyres. This partnership with M-Sport and the launch of the Drive DMACK Fiesta Cup will support emerging drivers and provide a low-cost route to competition in the WRC. A fully supported drive in WRC 2 is an incredible prize and one which will undoubtedly make the Cup hugely popular.”