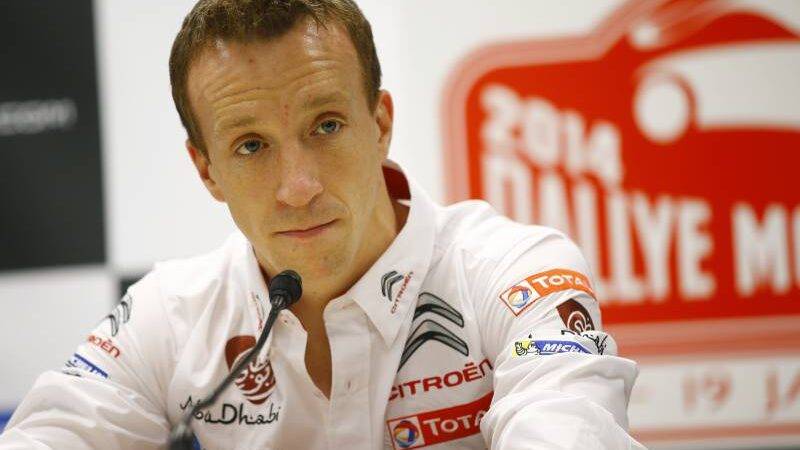 Another official preview, another opportunity to stop and stare, momentarily confused by new names, I guess it will take a while to get used to new lineups and even new names in the WRC this year. Citroën’s lineup for 2014 is promising and full of potential, to say the least, but it will take a while to get used seeing Mads Ostberg emerging from the DS3 WRC. Not to mention Kris Meeke and his recent one-offs and two-offs – finally in 2014 Kris is going to take part in every WRC event, driving for a proper WRC team, looking to make up some time lost when the never-fully-developed Mini WRC team died at birth.

As a team, Citroën Racing are still a strong and fierce competitor and I believe they haven’t lost any of their speed and dedication, even though it’s obvious that the WRC programme had to share some resources with the new WTCC project Citroën is working on. They’re not shy of throwing big numbers at us, so I guess they still plan to push for the top and 2014 is not just a year of slow exit. Which it isn’t. Citroën is going to be strong this year – Kris and Mads just need to keep their cars on the road and going fast.

CITROËN AND THE RALLYE MONTE-CARLO: A SHORT HISTORY LESSON…

Among its record number of WRC wins (93 victories since 2001), Monte-Carlo has a very special place in Citroën’s sporting and media history.

André Citroën was a big fan of marketing and therefore had no hesitation in entering his latest model at the 1934 rally. This was in spite of the fact the new car, the T45, was a pre-production vehicle, driven by a dozen or so crew members and finished the race 98th overall!

In 1959, the Brand won the rally for the first time in a Citroën ID 19 driven by Paul Coltelloni and Pierre Alexandre. Seven years later, Pauli Toivonen and Ensio Mikander secured a more unexpected win for the DS 21. Since it entered the WRC as a works team at the start of the last decade, Citroën has scored a series of wins in the Principality. In 2002, Sébastien Loeb and Daniel Elena dominated the event, but came away as runners-up. The Franco-Monegasque pair then went on to win seven out of the next eight rallies in a Xsara WRC, C4 WRC and DS3 WRC. The 2003 rally even saw an all-Citroën podium made up of Sébastien Loeb/Daniel Elena, Colin McRae/Derek Ringer and Carlos Sainz/Marc Marti.

Last year, Sébastien Loeb and Daniel Elena once again proved unbeatable, dominating the event after managing to negotiate the tricky road conditions created by the weather.
VERY SPECIFIC PREPARATION FOR AN EVENT LIKE NO OTHER

A winter rally held in the hills between the Alps and the Mediterranean, the Rallye Monte-Carlo is reputed for its highly varied, testing road conditions. The tarmac can be dry or wet, covered in ice or snow: the road surface changes over time, varies in different parts of the stages and as more cars come through.

To prepare for this testing rally, the Citroën Total Abu Dhabi World Rally Team organised several test sessions in the south east of France, close to the route of the rally.

Chief Operations Engineer for the DS3 WRCs, Didier Clément detailed the method applied by the team: “Our test campaign was split into two stages. Before Christmas, both crews spent two days in the Alpes-Maritimes department. They were able to get used to driving the Citroën DS3 WRC on roads without any tricky sections. Then, a few days ahead of the rally, we made things more difficult for them. They had to drive with studded tyres on dry roads and slick tyres on the snow. We also tested the intermediate configurations, with combined tyre set-ups. Kris and Mads had to get to grips with these kinds of situations, which can easily arise at some point or another in the rally.”

By trying to cover as many different situations as possible in testing, the team was therefore able to boost its already very extensive knowledge base. “During the rally, it’ll be a question of making the best – or the least bad – tyre choice. You have to anticipate the conditions, comparing the information provided by the gravel crews with data from our weather experts and from Météo France,” explained Didier Clément. “Using all this information, as well as our experience and feedback from testing, we recommend a tyre choice to the crews. However, it is always the driver who has the final say, because he must feel confident in the car to be able to push.”

For this rally, each driver will be able to use a maximum of 45 tyres. Within the Michelin range, the Citroën Total Abu Dhabi World Rally Team works crews will choose between soft and super-soft slick tyres, as well as studded and non-studded winter tyres.
KRIS MEEKE’S SIXTH OUTING AT MONTE-CARLO, BUT HIS FIRST IN THE WRC!

Kris Meeke has plenty of experience of competing at Monte-Carlo, having raced here five times already: “My favourite memory goes back to 2005. It was my first rally in a Citroën; I was competing in the Junior WRC in a C2 Super 1600. The conditions were difficult, as ever, with snow and ice. I remember that year in particular, as I took the JWRC category win!”

From experience, Kris knows that Monte-Carlo can be decided by minor details: “Understanding the road – being able to read the surface conditions and reacting accordingly – is the best way to do well here. It is pointless aiming for a particular result. The goal is to be consistent, not make any mistakes and focus on the main priority, which is to make it to the finish. If everything goes well, your efforts will be rewarded by a good result.”

“Testing allowed me to get used to the handling of the DS3 WRC in particularly demanding conditions,” continued the British driver. “On the snow or ice, it’s essential to be confident in yourself and in the car. The work we did helped me to learn and improve. Now we’ll just have to wait and see what sort of weather we get in the race!”
MADS ØSTBERG IS HOPING FOR SNOW!

Reflecting on his first outing at the rally in 2013, Mads Østberg particularly remembered the legendary Col du Turini stages: “I thought I had lost several minutes, because I was struggling to find any grip. I was fighting in the car, but had the impression I was totally powerless. At the end of the stage, I was so frustrated that I took off my helmet and put my head in my hands… And then someone told me that I had actually just set the fastest time so far. I was ahead of all of the leaders!”

Like all Scandinavian drivers, Mads is especially comfortable in slippery, low-grip conditions. The Norwegian would therefore not be averse to facing genuinely wintry conditions: “Monte-Carlo is a real challenge for the first race of the season. I haven’t done a lot of miles in the car as yet, but I had a good feeling in testing. I feel that the Citroën DS3 WRC is a really steady car, with a very powerful engine. Testing gave me the chance to experience just about everything that might be thrown at us during the rally. I thought that I fared pretty well with slick tyres on the snow, although it was sometimes more a question of survival than of racing… In any case, if I could choose the weather, I’d ask for as much snow as possible!”
CLASSIC STAGES RETURN TO MONTE-CARLO

Based in Valence in recent years, the rally looks very different this year, with over 90% of the route changed compared with last year. The 82nd edition of the rally gets underway in Gap on Thursday, 16 January. The race will start with two runs on a loop of three stages, in the morning and then in the afternoon: Orpierre – Saint André de Rosans (25.49km), Rosans – Sainte Marie – La Charce (17.98km) and Montauban sur l’Ouvèze – Col du Perty – Laborel (19.34km).

On Friday, 17 January, the crews will complete another loop around Gap with Vitrolles – Col d’Espreaux – Faye (49.03km) and Selonnet – Col des Garcinets – Bréziers (22.68km). After the midday break, the cars will head for Monaco with a second run on Vitrolles – Col d’Espreaux – Faye followed by the Sisteron – Col de Fontbelle – Thoard stage (36.85km). A regroup at Digne-les-Bains will enable the teams to change tyres, before the crews tackle the Clumanc – Col du Défend – Lambruisse stage (20.77km) after nightfall.

Meanwhile, the teams will dismantle the service structures installed near to the aquatics centre in Gap. They will be reinstalled overnight on the port of Monaco, the nerve centre for Saturday’s final leg. The final day’s action will revolve around the Col du Turini with two loops of two stages, made up of La Bollène Vésubie – Col de Turini – Moulinet (23.40km) and Sospel – Col de Brouis – Breil sur Roya (16.55km). The rally is scheduled to finish at 10.41pm.