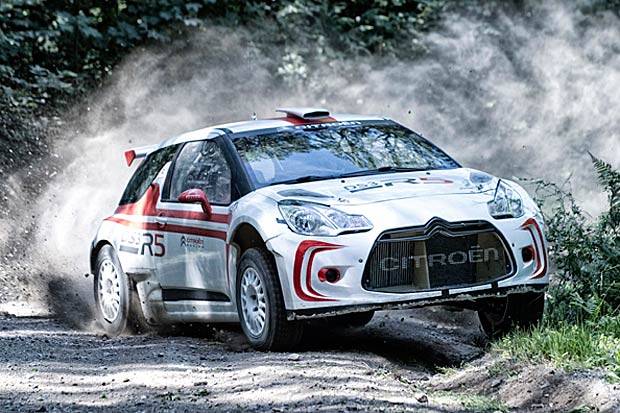 Juniors and juniorettes, this (among other things) is what you’re fighting for this year. The chance to compete in a freshly homologated Citroën DS3 R5 next year. Citroën is racing flat out to enrich its customer car programme as well as official engagements, so this week they’re taking part in Rally de Portugal, round 4 of the World Rally Championship with the usual suspects, Kris Meeke, Mads Ostberg and Khalid Al Qassimi. They’re also getting ready to WTCC, with former champ Yvan Muller and a rookie Sebastien Loeb. And then there is Junior World Rally Championship, this year based on Citroën DS3 R3. The arrival of R5 specced DS3 completed the line-up and now the R5 class consists of three cars; Ford Fiesta, Peugeot 208 and Citroën DS3.

CITROËN DS3 R5: A NEW ADDITION TO THE FAMILY!

Unveiled last season during Rally de Portugal and at the launch of the Citroën Top Driver series in the WRC, the Citroën DS3 R5 has just been homologated by the FIA.

The latest and eagerly-awaited member of the Citroën Racing line-up has already sold over thirty units. The first car to be delivered to a customer will take part in the Rally di Sanremo this weekend, driven by the crew Rudi Michelini/Nicola Angilleta.

This new Citroën DS3 R5 is the perfect tool for experienced drivers looking to compete in a four-wheel drive car. Its performance levels will enable crews to fight at the front in the regional FIA championships (ERC, MERC, etc.) and in the majority of national series. The Citroën DS3 R3 is also one of the leading models used in the FIA WRC2 Championship, the final rung on the ladder leading to the top level.

“Citroën Racing is restating its commitment to customer racing with a vehicle positioned one step away from the top of the pyramid,” emphasized Marek Nawarecki, Customer Racing Manager at Citroën Racing. “Long before we won the first of our eight World Rally Championship Manufacturers’ titles, we worked very closely with many private teams, providing them with cars that met their requirements. In recent years, our product range has expanded and we are proud to offer the biggest line-up of rally cars, from the R1 to the WRC. The Citroën DS3 R5 is now available following a long development programme which has enabled us to offer our customers a fast and reliable car.”

Winner of the Citroën Top Driver and the FIA WRC3 Championship last year, Sébastien Chardonnet played a significant role in developing the car. As a reward for winning the title, he will be competing in six FIA WRC2 rallies this year in a Citroën DS3 R5. His programme is due to get underway at Rally d’Italia Sardegna on 6-8 June.

The winner of this year’s FIA Junior WRC, which starts at the weekend in Portugal, will also be offered similar support for the 2015 season.