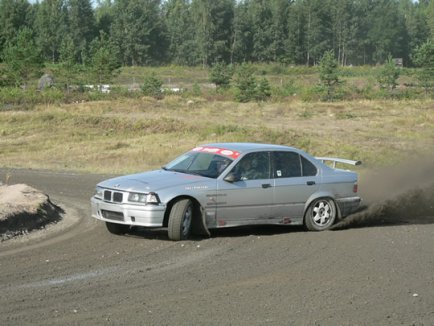 To stop being (just) a spectator and become a real co-driver, if only for one event, is and would be a dream come true for so many people. Maybe you were allowed to sit in a stationary rally car at some car show. If you got really lucky, you managed to elbow your way into a car doing shakedown runs at some national event. Perhaps your friends knows a guy whose friend is a rally driver, so you can, occassionally, enjoy a ride or two around the parking lot. But nothing really compares to the real thing, nothing. When you’re actually competing, no matter how small an event might be, it’s your turn to experience this rallying stuff firsthand. The responsibility, the adrenaline, the sheer pace of things happening around you… let’s just say it’s a unique experience, through and through. Many people say they would “pay to get into a rally car, even only for one event”. Well, here’s your chance now.

Ex-WRC driver Anthony Warmbold launched a project that could be your ticket to co-driver’s seat, in an actual rally car, competing in an actual event. And not just any old car, no, it’s a group F BMW 325i, which is pretty nice. Even better is the fact that Anthony plans to take his fan-co-driver to Finland, to one of the events making the national championship. So, let’s recap – a co-driver job for ex-WRC driver, in a BMW in Finland? Where’s the catch.

Well, the catch is… you must be good, you must be very good if you wish to beat other people and persuade Anthony that you are actually the next Nicky Grist. This entire project is actually crowd funded and every backer enters the competition for as little as €10. Each candidate is expected to write a short “letter”, sort of a mini press release if you like, then selection will be narrowed down to 8 people, then to 3 and finally one lucky bast… guy/girl will be selected to become a proper co-driver to Anthony.

More information about this project can be found in the press release below, and also don’t miss the links to project’s website and facebook page.

Antony is launching a non-profit “reality” style project with sole purpose to provide motorsport fans with unprecedented access to the sport they love. A crowd-funding operation is to permit raising the necessary funds. All backers can enroll in the selection process to become Antony’s co-driver for 1 national Finnish rally championship onboard a BMW 325i Group F rally car.
Antony started his driving adventure into WRC by co-driving a few events for his father Achim, a multiple German rally champion and winner of world events back in the 70’s and 80’s. Achim’s past co-drivers include names such as now FIA president and past Ferrari boss Jean Todt. He went on to become the team Principal of Mazda Rally Team Europe which successfully brought Timo Salonen, Tommi Mäkinen, Hannu Mikkola and others to success in the Mazda 323 gtr.

During his active days in WRC (2003-2005) Antony managed several top ten positions among fierce competition and he now desires to pass on the knowledge he acquired from his experiences. He passionately believes Motorsport fans should get the opportunity to experience rally sport up close and personal. The result is the creation of this competition with the objective to bring the winner right into the car.

How does it work?
Funds will be raised to finance the project through crowd funding. 21.000 € is the target. As the first part of this competition each backer (who wishes to enter the selection process) will have to write a short e-mail explaining why he/she would be an ideal candidate. The minimum donation amount is 10€ and that entitles people to enter the selection competition.
Upon reaching the target amount, 8 candidates will be selected. The 8 selectees will hold video conferences with Antony who will introduce them to the project. At the end of the video conference sessions he will select 3 candidates.

The next step will be to meet at a rallying facility in Finland where the 3 candidates will be introduced to the co-driver’s job in real-world exercises. At this point in time an experienced co-driver will assist in the training. The objective will be to familiarize candidates to the environment of a rally car, practice reconnaissance, note reading at rally speed in a rally car, changing tires (on-stage), basic mechanical interventions, introduction to time-controls, road-books, etc. The best of the 3 will be selected after the training has ended. Finally, the winner will participate together with Antony in a national event. The plan is to compete in the ITÄRALLI JOENSUU (13.06.15) in a Group F BMW 325i.

The project will be documented and people will be able to follow via social media such as a dedicated YouTube channel, a Facebook page and a blog.