Works Teams Against Privateers… Is it Sporting?

The issue of manufacturer “works” teams competing in an otherwise privateer championship has long been a stumbling block in both rallying and other forms of circuit-based motorsport. With the recent clean sweep by David Higgins and Subaru USA in the Rally America National Championship and Skoda’s domination of WRC2 this weekend in Spain, it seemed like a good time to revisit the topic. When it comes to Subaru USA, this is not meant to minimize the amazing feat that they accomplished this season. In a sport as unpredictable as rallying, to put together a perfect season is nothing short of amazing… no matter who else was competing. However, at some point, does another manufacturer championship against privateers with a fraction of the budgets seem just a little bit hollow?

Let’s talk about Rally America first. When the might of Subaru USA is compared to even the most well-backed privateers in Rally America, the inequality is massive. After winning the last 5 championships in a row and 9 out of the last 10, one begins to wonder when is enough enough! No one can put blame on Subaru USA for competing in the championship. At the moment, Rally America is one of the few places in the world where they can enter their cars in the top class of competition. As a business, they want to show their products in the best light possible and make a strong return on investment. Other than rallycross, at the moment, Rally America is the best option available. It’s not their fault that no other manufacturers have stepped up and made the commitment to compete in the championship. They shouldn’t be blamed for winning, but maybe the championship needs to take a look at this issue moving forward. Even though it’s a slippery slope, should stronger performance balancing measures be taken? 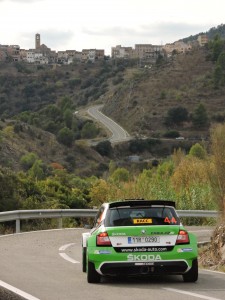 Now let’s move on to Skoda Motorsport. At the service park this weekend in Salou, they have a set-up that rivals the size of the WRC teams! Alongside the stages, it was clear to see that the Skoda’s were head and shoulders above the rest of the WRC2 cars. Until a mechanical failure on Esapekka Lappi’s car today, they had locked out the top 3 in WRC2. One begins to wonder, with the budget to run an above-average WRC team, why does Skoda poach rallies in the Czech National Championship, the ERC, and WRC2? Like Rally America, all three of these championships are largely comprised of privateers. While some of the European teams have a bit more money to play with than their American counterparts, they will still always struggle to keep up with a team fielded by the biggest auto company in the world! There is of course the argument that Skoda doesn’t want to be competing against VW in the same class. However, Porsche and Audi compete head to head in sports car racing, so that argument falls a bit flat. While it doesn’t seem very fair to have the Skoda factory team in the WRC2, should they be blamed for putting themselves in a position to win?

From an idealistic perspective, it doesn’t seem very sporting of Skoda and Subaru to do what they’re doing. However, from a realistic perspective, it makes perfect sense. To car companies, a motorsport program is a marketing strategy. If it isn’t putting the company in a positive light, then there is no reason to continue the program. While it may not seem right or fair, there’s nothing stopping these companies from continuing to collect championships against privateers – and that’s where the problem lies.

Rally championships are in a difficult position when it comes to this issue. On one hand, they want to have an exciting and evenly matched competition. However, they also need the cash flow and exposure that manufacturers bring to the table. If they take measures to even the playing field, they risk the chance that the factory teams might pick up their toys and go home. Smaller national championships caught in this conundrum don’t have many options, but the WRC does, and it’s time they did something about this issue. At the pinnacle of the sport, there is no reason a full factory team should be allowed to compete in a privateer championship. What’s the point of having a WRC if manufacturers can enter any class they choose? Now, some might argue that there are privateers such as Prokop and Kubica competing against factory teams in the WRC. However, those teams entered that championship with full knowledge that they would be competing against factory teams. They accepted that reality and still chose to compete in the top tier of rallying. As for the WRC2, this is a championship that was created to feature lower-budget cars that gave a place for privateers to compete. If Skoda supported private teams much like M-Sport does, it would be a different matter. However, for them to be allowed to bring over a team as big and powerful as VW to crush the WRC2 competition is just not right. It’s time the WRC makes a change!