Video: Hayden Paddon and a tail-happy i20 WRC 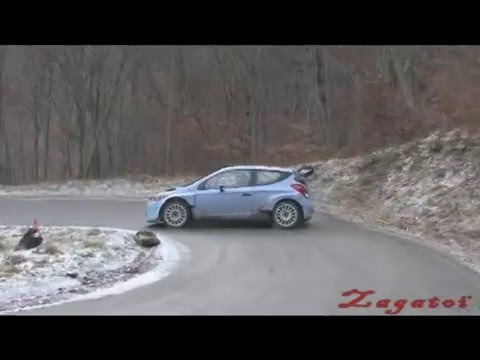 Who says Scandinavian flicks are only to be used on gravel and snow? I’ll tell you who – people with no imagination and no skills. Just because gravel is many times more forgiving to mistakes in flick’s execution does not mean it can only be done on loose surfaces. Also, do you even drift, bro?

Seeing he is rapidly gaining respect and admiration in elite class of rallying, I would say Hayden Paddon has plenty of imagination and skill. That means he is using all the usual tricks and a few more. For example, tossing the tail (rude people would call it arse) of the car from one side to the other, just to shift the weight optimally, ensure perfect amount of stoppage and also carry just the right amount of momentum around the corner. You know, the usual Scandinavian flick – that thing that looks like driver has no real idea which way the next corner is going, so he throws the car from one side to the other in sheer panic. Which, of course, he doesn’t – it’s perfectly under control, or at least that’s what they’ll have us believe.

Of course, throwing the car around on tarmac can get you in all sorts of trouble, but if rally driving is your daily job, you probably know a thing or two about physics, tyres, sideways grip, opposite steering and gas pedal dancing. The final result of that particular combination can be seen in the video below. Hayden Paddon, John Kennard and Hyundai i20 WRC are our dancers, the road is, I would say tarmac, but since this is a Monte Carlo Rally test, you can be sure “tarmac” is not the most precise name for this kind of surface. It’s dry and wet and grippy and slippy, all in one, all the time. What looked like a perfectly executed Scandinavian flick to me, could easily have been a “holy sh.. where’s the grip!?” moment. Only Hayden and John will know! Grip is something you don’t find often in Monte and so you’ll want to test in similar conditions – some of the slides seen in this video suggest Hyundai picked a perfect spot to mimic Monte conditions.