Rally America: This Is How It Should Be Done

Rally America has a thing or two to learn from their friends up north. Today, the season promo trailer was launched for what might be the be one of the best kept secrets in the world of rallying: the Canadian Rally Championship (CRC). No, the CRC may not have big names such as Ken Block and Travis Pastrana, but when compared with Rally America, it has plenty to offer. At the moment, Canada is the only championship in North America where you can find ex-WRC cars competing. It is also the only place on this side of the Atlantic where you can watch a snow rally run on proper studded tires. And for the past few years, it has been the only North American championship where privateers have been able to take the fight to the mighty Subaru factory rally team. However, all of these reasons pale in comparison to the differences between the way the CRC and Rally America promote their championships.

What is the CRC doing that Rally America isn’t? Well, lets start with an active YouTube page containing full length rally reviews, features, and promo videos. Head on over to YouTube right now and compare the Rally America channel and the CRC channel.

Here’s the Rally America channel… that’s right, their last post was 7 months ago from the 2015 Susquehannock Trail Pro Rally! For all I would know, their championship could have folded after this rally based on their YouTube page! 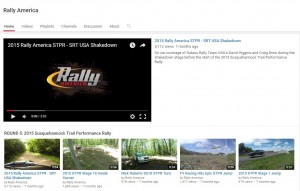 And here’s the CRC’s YouTube page… Their last post was just about 6 hours ago with the fantastic “This Is Why We Rally” promotional video for the 2016 season. Have a look at this piece and then tell me that it doesn’t move you. The production quality of this video rivals what we are seeing from the WRC promoter, and in some ways, the emotion in this piece actually surpasses that of the content are seeing on WRC+ at the moment. 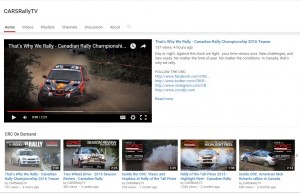 Don’t get me wrong, there is great rallying happening in Rally America right now, you just don’t hear about it. Head on over to Openpaddock.net (link) where Mike Shaw wrote a fantastic piece about the nail-biting finish to the Sno*Drift rally this past weekend. After two days of incredible drama, the rally was decided by only 0.6 seconds? How did I hear about this finish? Was it from the Rally America homepage or their YouTube channel? No… it was from Mike Shaw’s personal twitter feed! No disrespect to Mike at all, but if a professional championship is depending on personal twitter accounts to promote their sport, there’s not much potential for growth. In fact, go to the Rally America website right now, and there is still no article or press release about the finish of this rally… only a press release about the 2016 schedule. Come on Rally America… we’re just asking for a little bit of effort… just give us something that shows us you care a tiny bit about the sport you are supposed to be promoting.

To end on a positive note though, I encourage you all to have a look at what is happening up in Canada. The CRC has some fantastic stages, and a great mix of top class cars. In addition, they have some interesting historical pieces of machinery including the Sierra Cosworth… and those are pretty rare over here in North America. This weekend is the Rallye Perce Neige… a proper snow rally run on full studded tires. It’s not Rally Sweden, but for a national rally championship with limited resources, it comes pretty darn close!!!