Over the past 2 decades in the world of rallying, Skoda Motorsport has played an interesting role. In their early years with the Octavia and Fabia WRC cars, they were the perennial underdog. As that era passed and Skoda turned their attention away from the top class towards S2000 and R5, they transitioned to became the 800 pound gorilla in the room. However, 2019 will be the last time we see those plucky little green and white Fabia’s nipping at the heels of the big boys in the WRC. Sadly, the news broke this week that from 2020 onward, Skoda Motorsport will only be involved in rallying on a customer support basis. Yes, we’ll still see plenty of those Skoda Fabia R5’s tearing up the stages around the world in both domestic and international championships, but as a factory effort, Skoda Motorsport will be shutting it’s doors. I was trying to think of a good way to commemorate Skoda’s involvement in rallying over all these years. I could do a year-by-year review, but you could just as easily head over to EWRCresults to get that information. Instead, I’m going to highlight some of my lasting impressions of Skoda Motorsport in rallying. Maybe it will stir some memories for you as well.

It was 20 years ago in 1999 that Skoda entered the WRC with the Octavia WRC. What can be said about this car? 1999 was a new era for the WRC. It marked the debut of the “World Rally Car” concept, an evolution from the Group A era that preceded it. However, as much as I loved the Octavia WRC and it still holds a soft spot in my heart today, the honest truth is that it was probably obsolete before it even had a chance. Just compare it to its contemporaries such as the Peugeot 206 and the Ford Focus. There was a clear difference in design philosophies, and I’m afraid that Skoda didn’t get it quite right. Even when placed next to the more saloon-based cars such as the Subaru Impreza and Mitsubishi Lancer WRC’s, the thing looked like a boat! In it’s 4 years of factory WRC competition between 1999 and 2002, it only managed one podium, a 3rd in the Safari Rally during the 2001 season. When you think about this, it makes a whole lot of sense. The Octavia WRC was a big, beefy car. It was never going to be a match for its lighter, more agile competitors on the conventional rally stage. However, on the rugged Kenyan tracks, that was where the Octavia had a chance to succeed in the hands of Armin Schwarz. Other than this one shining moment, however, the Octavia’s history in the WRC was marred by mechanical issues and a consistent lack of pace. In my opinion, nothing better epitomizes this period of Skoda’s rallying history than the iconic image pictured below, Roman Kresta’s Octavia WRC precariously hanging over the side of a cliff in Monte Carlo. That was Skoda’s story in these years… barely hanging on… perched on the edge. 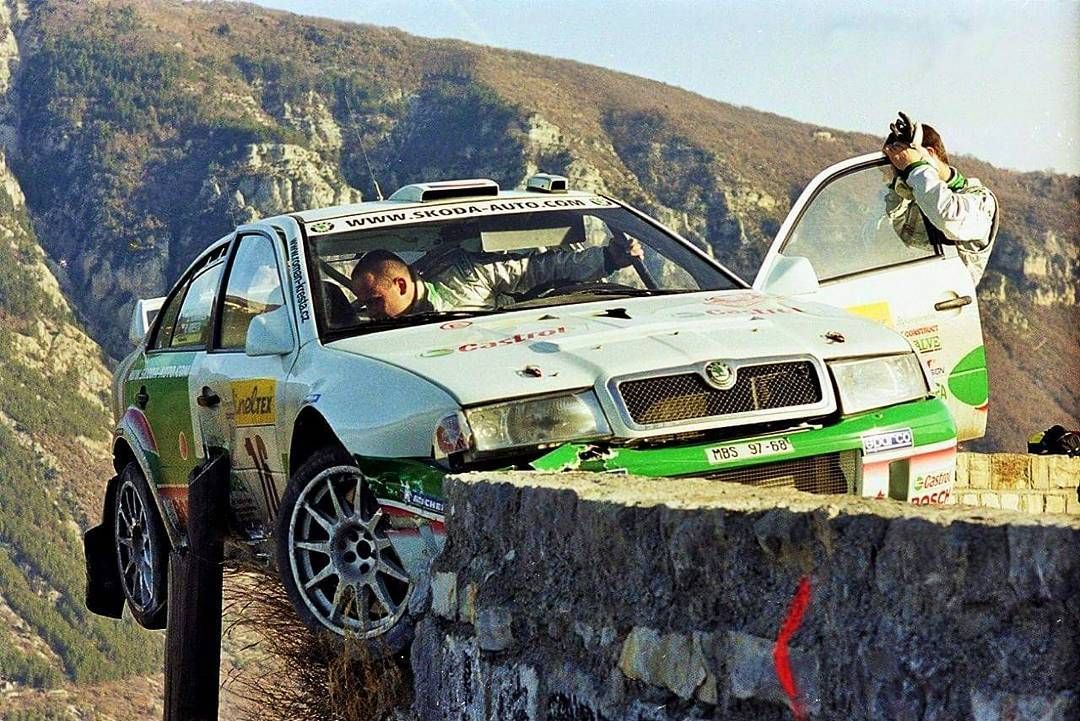 After the lovable disaster that was the Octavia WRC, Skoda went back to the drawing board and developed their next generation World Rally Car, the Fabia WRC which debuted in 2003. If the Octavia was dated and obsolete before it even turned a wheel in anger, the Fabia WRC was quite frankly, ahead of it’s time. With the Fabia, it seemed that Skoda could foresee the direction the sport was headed into the future. In a dramatic about-face, Skoda went from having the longest car in the WRC, the bulky Octavia, to the Fabia with the shortest wheelbase of any car in the championship at just 2462mm. For perspective, that was even shorter than the dominant Peugeot 206 at 2486mm! There’s no doubt that Skoda was most certainly on to something with the Fabia. It’s not a coincidence that over the next decade, the WRC would feature cars with a striking resemblance to the shape of the Fabia. I’ve always wondered what could Skoda have done with the Fabia if they just had more funding and a top class driver? Yes… about that…

We got one chance to see what the Fabia WRC could do in the hands of a world champion.There is something both beautiful and heartbreaking about the story of Colin McRae and Skoda in the 2005 edition of Telstra Rally Australia. It was to be Skoda’s last ever rally as a manufacturer in the top class of the sport. Though the Fabia WRC would go on to compete subsequent seasons within private teams, Australia would be the last time we saw it in those iconic Skoda colors as a factory entry in the top class. Though we didn’t know it at the time, it would also be the last time we saw Colin McRae in the WRC. On the cusp of achieving a podium finish to close out the season, Colin and Skoda were forced to endure the most gut-wrenching service we may have ever seen in the history of the WRC. Rather than trying to summarize it with my own feeble words, let the heartbreaking images below tell the story…

Hanninen, Mikkelsen, Ogier, Lappi, Suninen, Tidemond, Rovanperra. These are the names of just some of the drivers who honed their skills behind the wheel of a Skoda Fabia before moving into the top class cars of the WRC. After pulling out of the WRC in 2005, Skoda would return as a manufacturer 4 years later, but this time in a new upstart rally championship, the Intercontinental Rally Challenge. This would mark the beginning of Skoda’s era of dominance in the secondary tiers of rallying. First with the Fabia S2000 in the Intercontinental Rally Challenge, and later with the Fabia R5 in the European Rally Championship and WRC2, Skoda would go on to achieve the success that had always eluded them in the WRC. This success came in large part due to Skoda’s ability to attract the best young talents in rallying. Within the Skoda team, the future stars of the sport not only developed their skills, but also learned how to win. Driving fast is one thing, but turning speed into rally and championship wins is something completely different. Winning is a mindset, and many of the current WRC stars of today learned that mindset behind the wheel of a Skoda Fabia. Yes, it’s no secret that during this era, Skoda was head and shoulders above the other S2000 and R5 teams. However, this advantage allowed the team to become a proving ground that funneled young rallying talent to the top of the sport. Without Skoda, I wonder how many of these drivers might have missed their chance at the WRC over the years.

To close, if there’s one thing that stirs more emotion than anything else surrounding Skoda’s decision to withdraw from WRC2, I’d have to say it’s the effect it will have on Jan Kopecky. Over the past 15 or so years, I’ve followed Jan’s career with great interest and admiration. He was one of those young drivers who suffered during those lean years for the WRC in the late 2000’s. I truly believe that Jan’s career was about to take off right when Skoda pulled out the first time in 2005. Yes, he was able to put together a privateer program in the years following, but I don’t think he ever got a fair chance to show what he could do. I wish we had gotten the chance to see Jan and the Fabia WRC grow together because I think that combination had great potential and could have gone on to achieve incredible things. What impresses me so much about Jan is how he responded to adversity and just kept hanging around over the years. Keeping his partnership with Skoda alive, he’s managed to enjoy a long and successful career behind the wheel of the various iterations of the Skoda Fabia. For me, Jan Kopecky will always be synonymous with Skoda, so to see Skoda pulling out leaves me feeling pretty sad for him. I hope we’ll get to see him in the WRC next season in a privateer Skoda Fabia, but at this point in his career, I wonder if we will. If we don’t, well… Jan’s still managed to create one of the longest and most consistent careers with one manufacturer in modern rallying. Even if it didn’t happen at the pinnacle of the WRC, this is still a huge accomplishment in its own right. Jan Kopecky, I tip my cap to you for all you’ve accomplished in those little green and white cars.

There’s so much more I could say, but I’m going to leave it at that for now. I know that there are a ton of moments that I’m leaving out, but these are the impressions of Skoda that I will carry with me. Feel free to share some of your favorite Skoda memories below or on Twitter and Facebook. I’m curious to see how the rest of you will remember Skoda!