It’s been a little over a week since this news came out, but I think that it is notable enough to deserve a few words. Right when we though the crazy WRC “silly season” of rumors, transfers and retirements was over, one final bombshell was dropped on the eve of the Monte Carlo Rally. Colin Clark, the “Voice of Rally” announced that he would be leaving WRC All Live and bringing his talents to the Dirtfish Rally School. Within hours of this announcement, content from Colin began to appear on the Dirtfish website and various social media outlets.

There’s no question that Colin will be missed from the stop lines of the WRC’s stages in 2020. As great as the other stage-end reporters are, Colin’s absence was certainly felt in Monte Carlo this past weekend. For one thing, Colin’s voice has been a fixture on WRC Radio and more recently, WRC All Live for over a decade. His enthusiastic, if sometimes over the top, interview style is something that will never be replaced. Since the inception of WRC All Live in 2018, his approach has ruffled more than a few feathers at the ends of stages and has led to some fantastic banter with the drivers. For sure, we never quite knew what to expect when Colin shoved the microphone into a rally car, but it almost always proved to be entertaining. Even if it may have annoyed some of the drivers, the “wild card” nature of Colin’s interviews will certainly be missed. 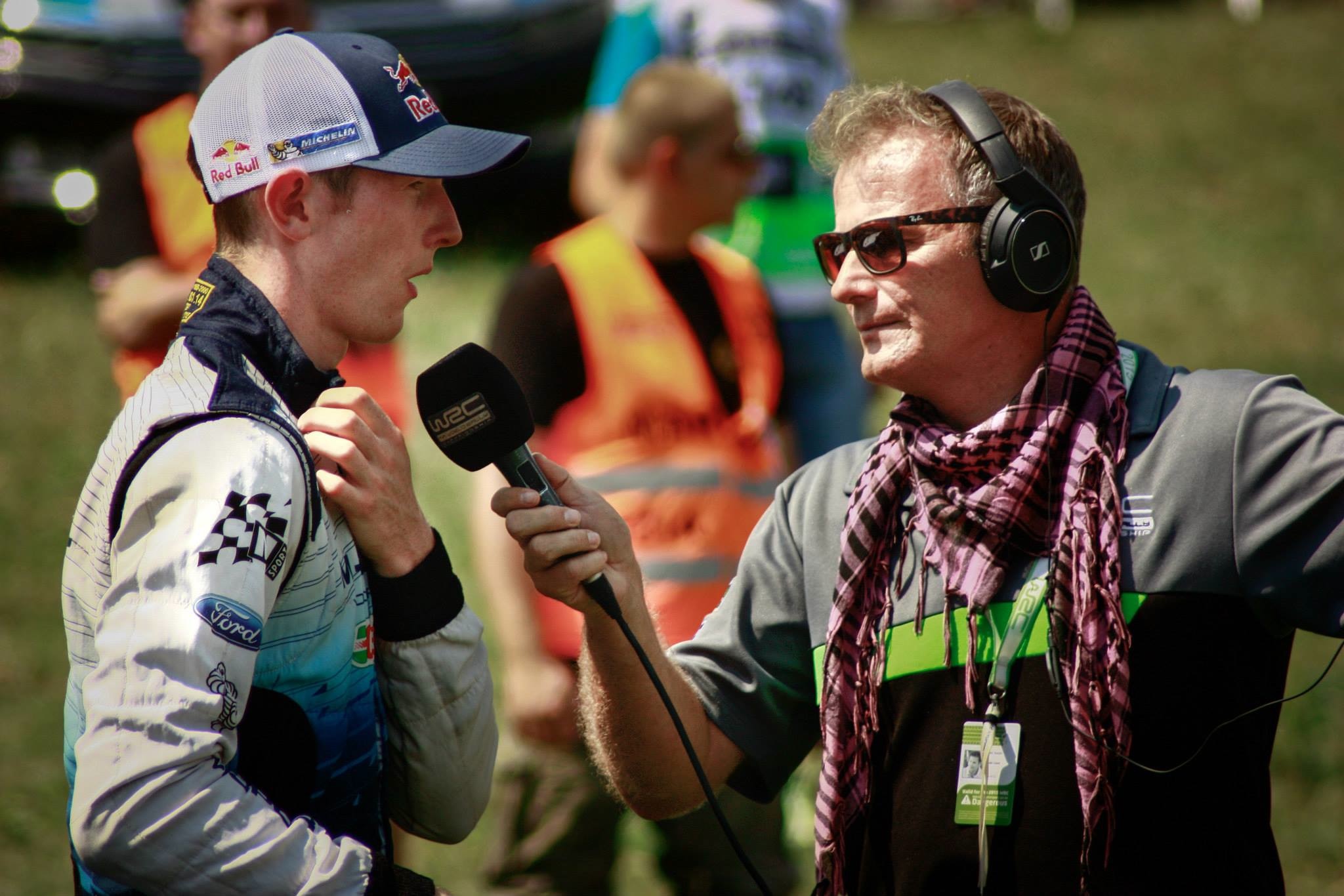 But WRC.com’s loss will be Dirtfish’s (and our) gain. As the WRC All Live service has become more polished and streamlined, I have begun to wonder if Colin’s free spirit would get stifled. Being employed as a journalist for the official WRC streaming service can be a bit of a tricky proposition. This is especially true for someone as honest and outspoken as Colin can be. Of course I don’t know for sure, but I can imagine that in such a position, there could be pressure to “toe the party line” and always put a positive spin on the championship. From what I’ve heard from him over the years, I’m not sure Colin is that type of guy, and in his new job, he’ll have far more freedom to speak his mind on the WRC both positively and negatively. With Colin working for Dirtfish, we’re going to be treated to true unbiased editorial content. We’re going to get to see his unbridled enthusiasm for the sport, free of any influence or sterilization by a TV producer. Hopefully, we’ll get to see a more informal and relaxed side of the crews as Colin is able to leverage his personal relationships with them to produce his unique content. I feel that we already got to see a bit of this when he conducted some impromptu interviews along the road section to the first stage on Saturday morning. No, it didn’t have the slick production of the WRC All Live service, but it was intimate, informal, and personal. Watching him run from car to car as the crews stretched and got ready for the stage made me feel like I was right there with him along the side of the road.

The other great thing about Colin joining Dirtfish is that we’re going to get to see a bit more of “rally culture” beyond just the action on the WRC stages. In the days of WRC Radio, Colin always used to give all kinds of fun anecdotes about the region around the rally. We got to hear about the pub around the corner from the end of the stage, or a cool attraction along the rally route. Was any of this pertinent to the stage times? No, but there’s a lot more to rally than just tenths of seconds. What makes rallying special is that it puts an entire region of the world on display… the people, the places, the landscape, the culture. With Colin, we always got a taste of this. However, with the pressure of conducting a 30 second interview before an angry WRC driver sped away and ran over his toes, Colin had to cut a lot of this stuff out. Now with Dirtfish, we’re getting to see this side of rallying again. His piece titled, “A Night on the Col” was a perfect example of this. It set the scene and made us feel like we were there with him. As great as WRC All Live can be, it’s stuff like this that we have been missing. 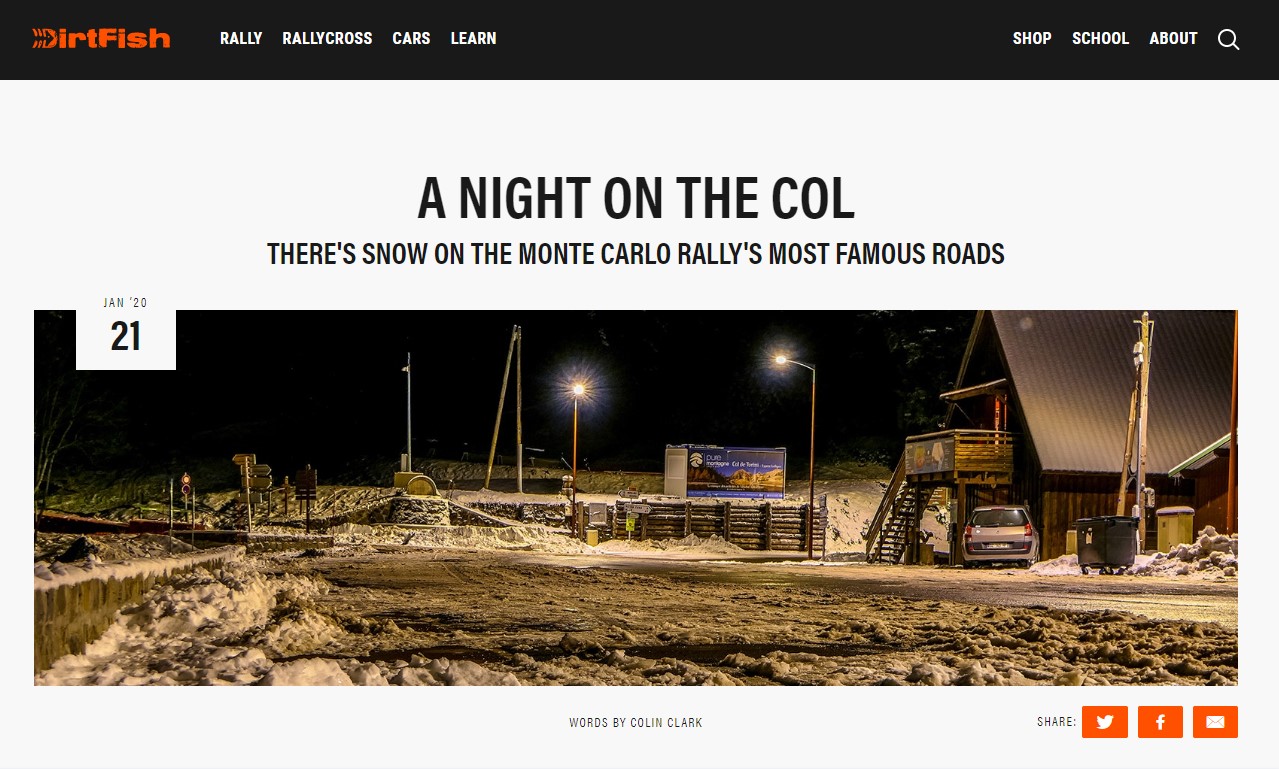 Lastly, this might be a bit parochial, but as an American, having Colin joining a US based rally outlet feels a bit like a coup. We now have one of the most influential rally journalists in the world reporting from our corner. For years, as American rally enthusiasts, we’ve been longing for something: some kind of spark that might be able to expand the influence of rallying in the USA. The expansion of Dirtfish might be this spark we’ve been looking for. By employing Colin, Dirtfish has made their intentions very clear that they intend to become the North American juggernaut for rallying journalism. This can only mean good things for the sport on our side of the pond which will in turn, will strengthen rallying as a whole.

So, did we did miss Colin on WRC All Live for this year’s Monte? Of course we did. However, if the content that came from Colin over the weekend is any indication, we’re only just unearthing the potential of his collaboration with Dirtfish. When Colin’s knowledge, enthusiasm, and unique perspective is paired with Dirtfish’s resources, the future is indeed bright.