No WRC? No Problem!

It was a little over a year ago when I put out a piece about how Ireland deserved to get their WRC round back. I’ll freely admit that looking back, those words came from a bit of naivety and perhaps some nostalgia as I watched ex-WRC cars tearing down the country lanes outside of Galway. I’ll also admit that there was a fair bit of ignorance at play in my assumption that hosting a WRC round was the “be all and end all” when it comes to rallying. What I’ve learned this weekend both from my own observations and some very enlightening conversations with incredibly knowledgeable people is that this assumption couldn’t have been further from the truth.

During my time here in Ireland, it has been fascinating to listen to the locals’ perception of the WRC rallies held back in 2007 and 2009. I heard things like, “It was more of a political move than anything” “That rally never should have happened” and “Irish rallying has so much more to offer than what was shown in that rally”. I was quite surprised to hear statements like this, and especially surprised about the people from whom these comments 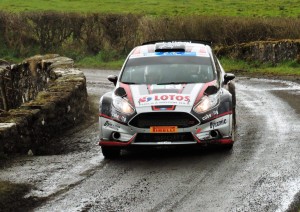 were coming. It wasn’t just a handful of disgruntled fans saying these things; I was hearing it from competitors, marshals, and journalists: people who care deeply about Irish rallying and have been involved in it for years!

What has been on display this weekend at the Circuit of Ireland is a celebration of everything that makes rallying great. The WRC is the pinnacle of the sport, but you don’t need the WRC to make a rally fantastic, and this weekend is concrete proof of that fact. I don’t think many people who stood stage-side today watching over 30 top class R5 cars come flying past were thinking, “Gosh, I sure miss the WRC right now.” Anymore, a well-piloted R5 car is just as spectacular as a current WRC car and with the class of this year’s Circuit of Ireland field, the quality of rallying on display is out of this world. In addition, with the current format involving the European, British, and Irish Tarmac Championships, it allows the best drivers from each region to go head to head on a fairly level playing field. As if that wasn’t enough, we can’t forget about the stages! The organizers really did a fantastic job this year of designing a route that displays the true character of Irish stages. Whether it’s the spectacular vistas of Torr Head or the tricky jumps and junctions of Hamilton’s Folly, both the competitors and spectators were treated to all the features that make Irish roads so special for rallying.

So, what’s the point of all this? Is it meant to be a slight against the WRC? By no means! People here still want the WRC back. However, they want it to come back with the proper funding, organization, and leadership that puts Ireland and Irish rallying in the very best light. At the moment, it appears that the Circuit of Ireland is accomplishing all of these things. Will we see it on the WRC calendar someday? Possibly, but just because it isn’t there right now is no reason to forgo seeing this event in person. If you get the opportunity… GO! The Circuit of Ireland is truly a “bucket-list” rally.